Spinelli Gets a Response From the Traitor

Monday January 15, 2018: Diane has some advice for Jason, Alexis and Finn bond, and Carly worries to Kim about their kids. 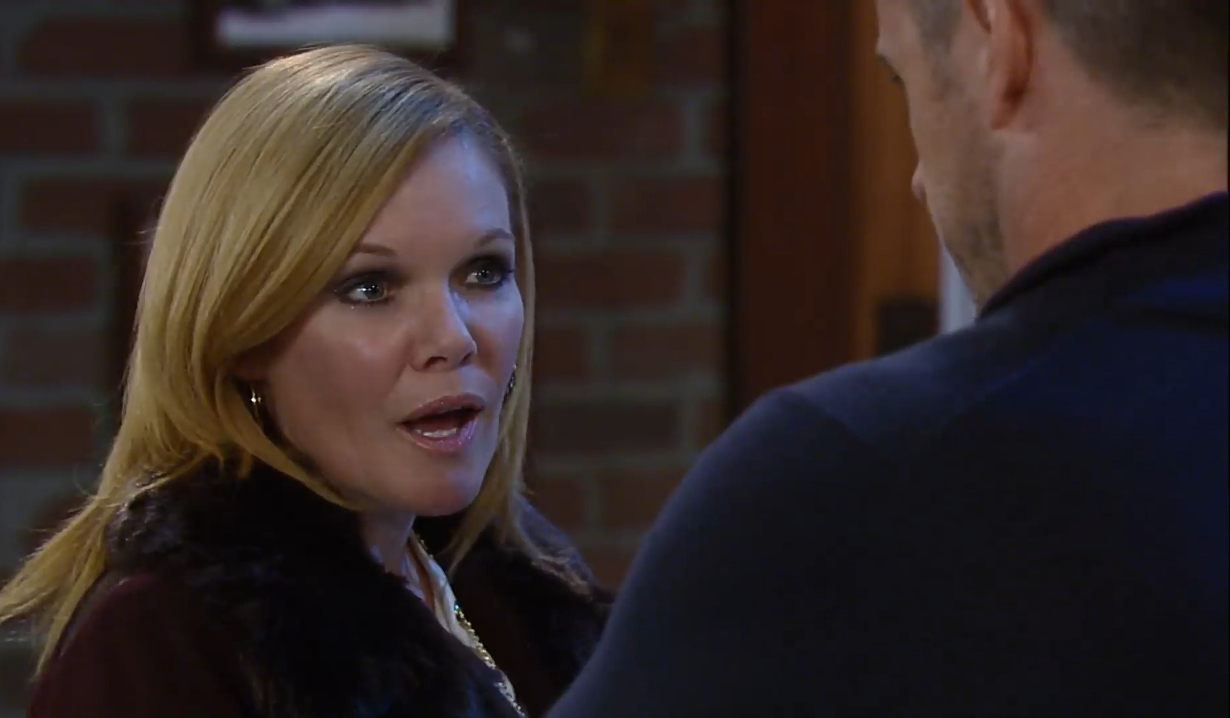 Julian and Kim flirt at the bar in Charlie’s when Diane and Alexis arrive. She exits as Ava comes in and begins taunting Alexis for staring at Julian. After some bickering, Julian wanders over and his sister asks about the broken window. The lawyers guess it is intimidation, but Julian claims it’s nothing. After they leave, Ava quizzes her brother about Alexis. He claims that his ex has moved on. The topic turns to the wonders of Griffin. She assures Julian he can get a new lease on life. At Pozzulo’s, Spinelli assures Sonny and Jason that his email will draw Faison’s son out of the woodwork. P.K. responds fast and Spinelli writes back immediately. Diane arrives and tells them that Nathan’s identity as Faison’s son has gone public. Spinelli rushes off to check on Maxie. Diane starts quizzing her clients about what they’ve been doing. After reminding them to keep their mouths shut, she takes out the divorce settlement paperwork. Diane is sure that Sam will never be happy with Drew. After she exits, Sonny encourages Jason to tell Sam he loves her. A message comes in from P.K., asking if they read the ending to the novel. Maxie, Nathan and Lulu are at Crimson. The blondes try making calls to pull the interview but it’s too late. Everyone will now know that Nathan is Faison’s son. Maxie freaks out and blames Lulu for everything. Peter interrupts and tells Maxie that she should be proud of her friend’s story going viral. Maxie yelps in pain and Nathan rushes her to the hospital. Lulu sobs into Peter’s chest until Spinelli interrupts. Lulu explains what happened to Maxie and Peter walks off, leaving the old friends to argue. Carly goes to the hospital looking for Kim. She bumps into Bobbie and shows her the birth control she found in her daughter’s purse. Bobbie thinks she should talk to Joss not Oscar’s mom. When Carly spots Kim, she runs over and waves the condom box in her face. Kim agrees their kids are too young but is relieved they are using protection. Carly is sure that Oscar is the instigator. She calms down and they agree to talk to the kids. The doctor is sure the kids will do what they want regardless. She gets back to work and finds Maxie in pain. The doctor runs a sonogram and then assures them all is well. After the doctor putters off, Nathan reminds Maxie that it’s their anniversary. Meanwhile, Finn bumps into Anna by the elevators. They make awkward conversation. He didn’t get to say goodbye when he moved out. She hopes that he and Roxie are happy. They discuss pretending to be a couple for so long and then shake hands, wishing each other well. He stares as she walks away and wipes off a tear. The doctor heads to an addiction meeting. When it ends, Alexis thanks him for coming. They discuss the value of the meetings and all the guilt she feels. He confides about losing his wife and then losing Hayden and the baby. He can’t take all that loss again. She admits that she’s addicted to a man who makes her make bad decisions.

Felicia finds Anna wailing on the punching bag at the gym. They discuss the Nathan situation and the false reality that Anna lived in with Finn. Anna admits it was really fun but broke things off with the doctor to protect him. Felicia accuses her of shutting herself off because of Faison and advises her not to push Finn away. Devane insists it’s necessary because the doctor “has a knee-jerk knight in shining armor thing.” At Kelly’s, Joss and Oscar have a vague conversation and hold hands. He can’t wait for the ball. Outside, Bobbie and Carly arrive, discussing how they can’t keep their children as children forever. They spot the kids inside and Bobbie urges her to have a mother-daughter chat with Joss.

Jason is tired of waiting around.

Sam Signs Divorce Papers and Then...

Nelle Hopes for a Future With...