Thursday January 11, 2018: Sam and Jason meet to finalize their divorce, Sonny informs Julian how he will pay his debts, and Maxie asks a favor of Mac. 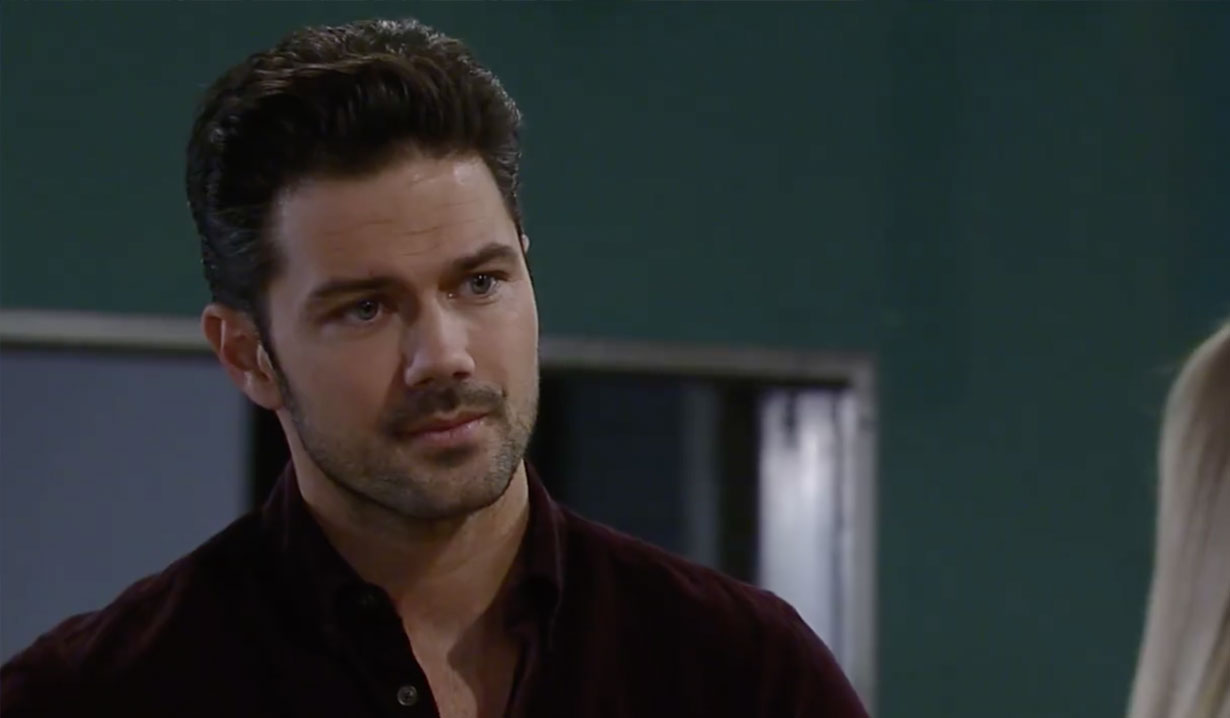 Maxie wakes up at her desk at Crimson after having a nightmare that Faison stole her and Nathan’s baby. Peter August asks if she is okay, and she apologizes for napping at work and explains she’s just exhausted due to the pregnancy. Peter came by to see Nina, but she’s not in. Later, Mac drops by and gives Maxie some green juice to help with her pregnancy. He notes she’s not looking to well, which she explains is due to the stress over Nathan’s father. She brings Mac up to speed on the Faison revelation, and asks Mac if he can help her and Nathan disappear. He refuses because being on the run is no kind of life. Up in the Metro Court restaurant, Diane meets with Jason to finalize his divorce. Jason instructs Diane to just give Sam whatever she wants. Diane plans to make sure his best interests are protected. Back down in the Aurora offices, Alexis interrupts a moment between Drew and Sam. She tells Sam they need to get to the courthouse, so they leave. Curtis arrives and gives Drew his old high school yearbook, which he dug up in Sawyer, New York where Drew grew up. Drew looks through it and discovers he ran track just like Jason did. He notes unlike other twins that are connected, he and Jason are trying to separate from each other’s lives. Drew explains Sam and Jason are getting divorced as they speak so that that he and Sam can marry. Drew asks Curtis if he would be his best man, and Curtis would be honored.

Lulu drops by the PCPD to ask Nathan if he has thought about working with her to find Faison. He agrees to help her by using himself as bait. They plan to put out an interview with Nathan in order to lure Faison out. Dante visits Julian at Charlie’s Pub after Julian called the cops over a brick that was thrown through his window. Julian knows it is a message, and suspects it has something to do with either Sonny or the development of Charles Street. Dante can’t do much seeing Julian has no cameras up, but offers to have a patrol car keep an eye on things. Later, Sonny drops by, and Julian accuses him of having his goons throw a brick through his window. Sonny has no idea what Julian is speaking of, and is here to make Julian pay his debts. He informs Julian that his bar is going to serve Corinthos Coffee.

Dante returns to work and overhears Lulu and Nathan discussing luring Faison out. She explains the plan, which Dante thinks is too dangerous. Lulu puts her foot down and says she’s doing it, so Dante insists he be part of the operation. She agrees, and leaves to run the idea by Peter. Dante warns Nathan that Maxie probably isn’t going to be keen about him using himself as bait to catch Faison. Nathan knows, but feels it is the only way to nab Faison and keep his family safe. Later, Sonny arrives and asks Dante about this business of someone throwing a brick through Julian’s bar window. Alexis and Sam arrive at the courthouse, where they meet up with Diane and Jason. The lawyers get to work, and first on their agenda is the penthouse. Jason wants to give it to Sam, but Diane explains it is prime real estate. Sam offers to move, and Alexis suggests they sell it and split the profit. Sam and Jason have flashbacks of shared moments at the penthouse. The two lawyers continue to hash out other details, such as a payback scheme for Aurora and the money Drew and Sam borrowed from Jason’s bank accounts. Jason tells them all enough squabbling, and signs the papers. He flashes back to more romantic times with Sam, such as Valentine’s Day, his proposal, and their wedding. He tells Sam the money doesn’t matter to him and he just wants her to be okay. Sam goes to sign the papers, but Alexis stops her because they still haven’t discussed custody of Danny. Lulu meets with Peter in the Metro Court restaurant and explains her plan to lure Faison out by interviewing his son. Peter is shocked because he thought Faison only had a daughter. She informs him that Faison has a son he doesn’t know about, Nathan West. Later, Lulu calls Nathan to tell him that Peter has given their plan the green light. Back up in Crimson, Mac pleads with Maxie to stop stressing because Faison doesn’t even know Nathan is his son and hopefully he never will.

Peter informs Nina that her budget is out of control.

Lulu tells Nathan that when Faison shows his face it will be to Nathan.

Oscar asks Drew to teach him how to fight.

Jason says, “Your tech said you had something.”

Carly thinks even the best of them can make wrong turns.

Sam Signs Divorce Papers and Then...