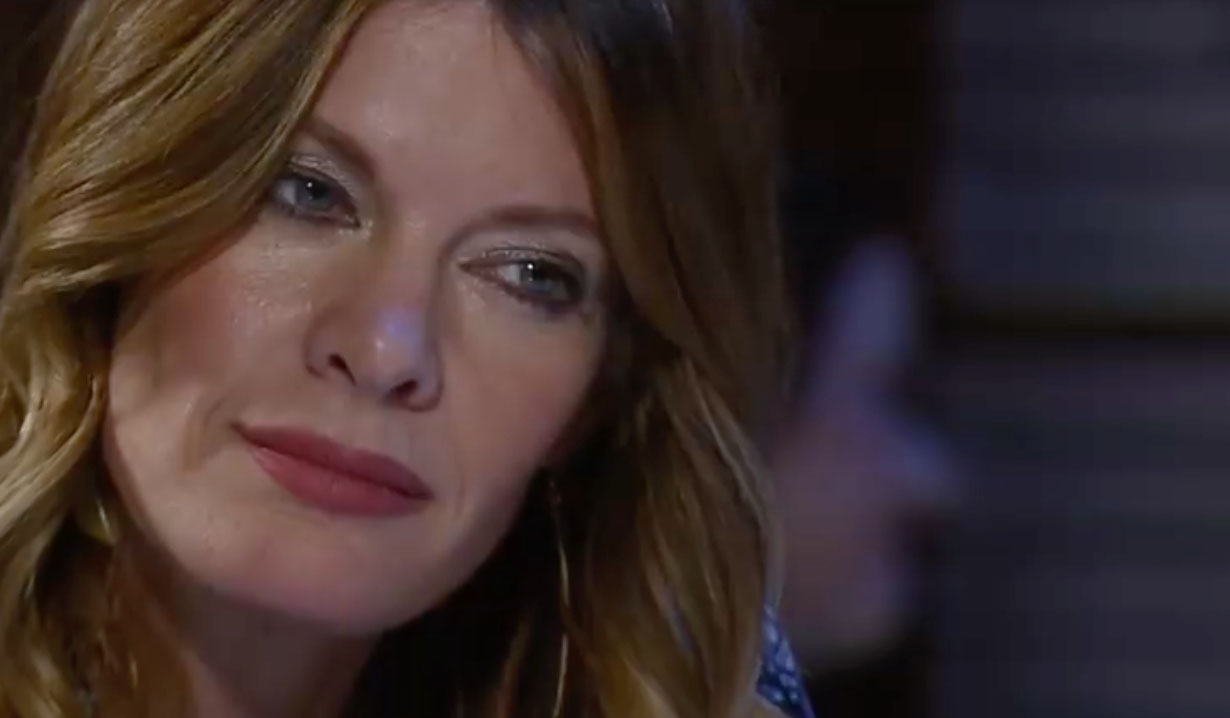 Franco returns home to find Jim Harvey played by Greg Evigan talking with Elizabeth. Jim says he dated Franco’s mom when he was a kid and recalls that he was an artist even then. A skeptical Franco doesn’t remember him, but wants to know what he’s doing there. Elizabeth invites Jim inside, as he tells Franco he keeps in touch with Betsy. He mentions how proud Betsy is of him, which makes Franco wonder if Betsy sent him. Jim quips Franco’s always been a tough nut to crack and then gets distracted by Franco’s twin painting. [“GH” was pre-empted at 3:19 PM – 3:40 PM EST for a national press conference.] Franco tells Elizabeth he doesn’t do business with people who call him Bobby. He then suggests they should set their wedding date. While dining at the Metro Court, Olivia jumps in Ned’s lap when he agrees to run for mayor. She offers her services as campaign manager and states no one can stop them. They make out and then toast to Mayor Quartermaine.

At Charlie’s, Laura tells a thrilled Kevin she’s running for mayor. Charlotte runs in, excited to see her grandmother. Nina follows as Charlotte shows off her skating costume. The little girl bemoans the fact Nina made her return the one Cassandra gave her. Nina breezes over the comment and whisks Charlotte off to get hot chocolate. The newlyweds speculate what that was about. Ned and Olivia walk in and learn about Laura’s mayoral plans and vice versa. The press enters looking for a statement from both candidates. They oblige and pledge a fair fight. Jim enters and tells Ned he has his support. Ned in turn thinks they share a vision of what Port Charles can be. Laura observes from afar and vows, “Game on.”

Jordan pays Valentin a visit at Wyndemere. She wants to know why he went to see Erich so soon after he was arrested. Anna lights candles at home for her and Finn’s belated New Year’s Eve celebration. She thinks it will be a proper farewell to their partnership. Over champagne and sparkling water, they catch up on what they don’t know about each other. They discover the one thing they have in common is that they both sleep naked. Anna starts to walk away but Finn grabs her arm and pulls her into a kiss. Later, after Anna has left, Jordan stops by the house to tell Finn Cassandra’s laptop is missing. They discuss the issue and then Jordan says she hopes things are different for him and Anna moving forward. She leaves as he eyes his and Anna’s celebration table. Anna arrives to see Valentin at Wyndemere as Nina returns with Charlotte. Nina and Anna stare each other down, while Valentin sends his daughter off to bed. Once they’re gone, Valentin suggests to Anna that maybe Finn put Cassandra in a coma. Anna says it doesn’t matter now because the case is closed. They agree that as strange as it might seem, it was a pleasure doing business together. Nina returns to Valentin after Anna has left, worried that Anna figured it out. She flashes back to NYE when she rushed over to Anna’s house. Anna wasn’t there, but a needle wielding Cassandra was. There was a struggle, which left Cassandra with the needle in her chest. Valentin recalls it as well and says that was the end of the nightmare, but Nina wonders if the nightmare is just beginning. Valentin flashes to her begging him not to call the police because she feared being sent back to a mental institution. He swore to take care of everything. They went back to Anna’s house, where Valentin cleaned up any trace of his wife and carried Cassandra out the door. He vows to always protect Nina, who tearfully hugs him. Alone, Valentin pulls out a laptop and deletes a picture of Claudette. He says, “In the past.”

A disappointed Anna returns home to a note from Finn, who got a room at the Metro Court.

Curtis tells Drew he found something.

Jim Harvey Reveals a Connection to...

Lulu and Nathan Hatch a Plan to Lure...