Jim Harvey Reveals a Connection to Someone in Port Charles.

Tuesday January 9, 2018: Sam asks Jason for a divorce, Liz wants to set a wedding date, and Ned and Laura both decide to run for mayor of Port Charles. 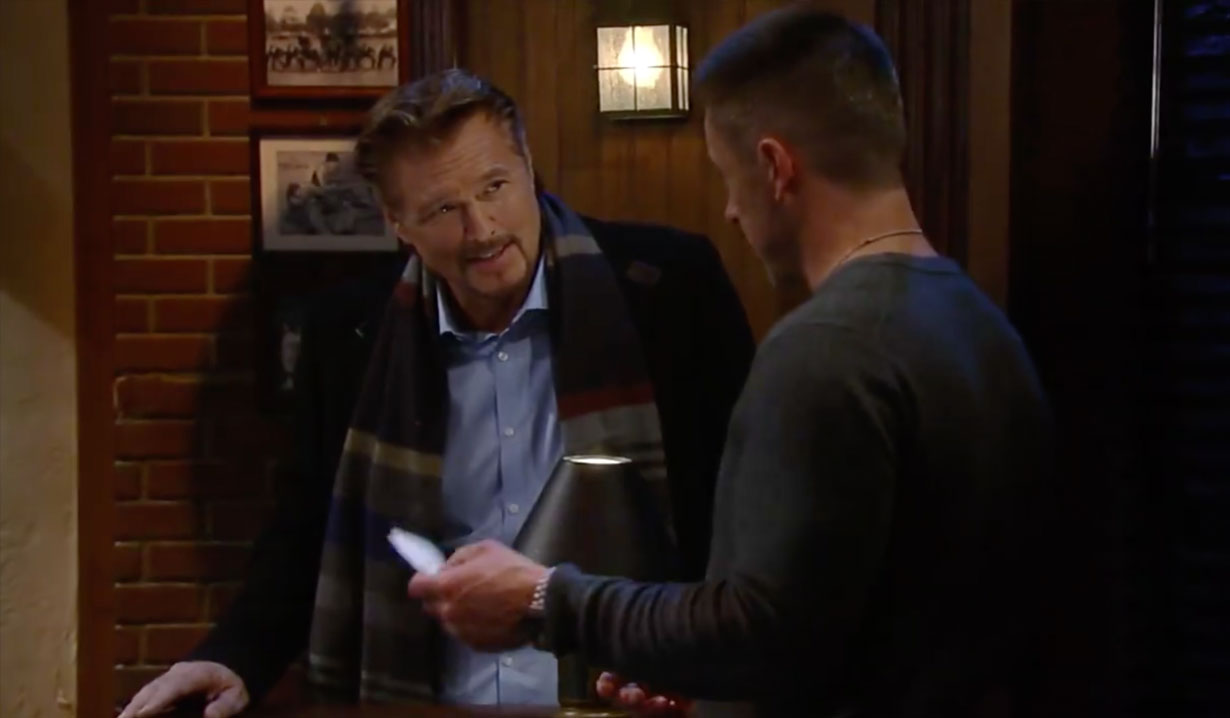 At Charlie’s Pub, Julian and Alexis discuss Molly’s issues with her landlord, when Molly walks in on them. Alexis sits down with Molly, who is determined to expose her greedy landlord. Laura drops by Liz’s place with the boys Christmas gifts. Liz asks her how things are going with Kevin. Laura admits she was initially hesitant to marry again, but she’s glad she took the risk. She feels sometimes you have to let go of what’s safe and go for it. At GH, a delivery man drops Franco’s painting of the boys off, which was supposed to go to his studio and not his office. Kevin turns up at his office door admiring the painting. He feels peace when he looks at this painting, and asks Franco where he’s going to hang it. Franco explains it is going into storage because it evokes other feelings in him. Kevin suggests he rethink that because facing emotions head on can do wonders. At the Metro Court, Oliva tries to convince Ned to run for mayor, but he refuses. Ned takes a call from his friend Jim, who wanted to talk more about Charles Street. Ned informs him that he’s no longer working at ELQ and he’ll be dealing with Michael from here on out. At the bar, Michael finds Carly cleaning and realizes something is bothering her. They discuss Nelle working for Ava, which Michael is prepared to let play out for the time being. Michael spots Ned across the bar and goes to talk to him. Olivia leaves them to talk, and Michael tries to convince Ned to return to ELQ running the South American division. Ned is insulted, and accuses Michael of trying to get him out of the way because Michael knows he should be running ELQ. Up in the Aurora offices, Jason drops by to see Sam. She comes right out and asks him for a divorce so she can marry Drew. He agrees because he only wants her to be happy. They argue over what to put as the reason for the divorce, but adultery or incarceration don’t fit their situation. Jason suggests they use irreconcilable differences as the reason for the divorce, because he loves her and she loves Drew. Back at Charlies’, Jim meets with Julian and introduces himself. He offers to buy the pub, but Julian refuses. At their table, Alexis asks her daughter not to escalate anything with her landlord until they hear from Curtis and find out what he’s learned about the guy. Molly agrees, and Alexis heads out. Later, Laura meets with Jim, who attempts to convince her how his development plans will benefit everyone, but Laura doesn’t buy it. Jim leaves, and Kevin arrives and Laura and asks what he just missed. Laura rants to him about Jim’s plans, and he pushes her to run for mayor to stop the development. She agrees. Meanwhile, Molly confronts Julian about her mom obviously asking him to keep an eye on her. She assures him if she has a problem, she’ll ask Sonny, the garbage man, or anyone else but him for help.

Franco returns home with the painting and is greeted by Liz with a passionate kiss. She tells him she wants to them to pick a wedding date immediately. She starts going through dates on the calendar, when Franco realizes they are out of milk and runs out to get more. After he leaves, Jim drops by to speak with Franco. Liz informs him that he’s not there, so Jim leaves his card. Jim reveals he knew Franco as a kid when he went by Bobby Frank. Franco returns, and Liz introduces Franco to his old friend Jim. Back at the Metro Court, Jason meets Carly in the restaurant, and she learns Sam asked him for a divorce. Carly believes Sam is making a mistake, one she can’t admit to herself. At Ned and Michael’s table, Michael wishes he and Ned could come to an agreement, but says the door is always open if Ned ever wants to return to ELQ. Michael leaves, and Olivia continues to push him to run for mayor until he agrees. Alexis drops by the Aurora offices where Sam asks her to help her divorce Jason again. She admits to her mom that she shared a kiss with Jason, but she has to let go of that person to move forward. Alexis wants to make sure she’s letting go for the right reasons. Alexis feels she needs to make peace with Jason before she remarries Drew. Sam admits she’ll always love Jason, but she loves Drew and the life they’ve created. Alexis offers to help her get her divorce.

Olivia tells Ned they have to start the campaign at ground zero.

Anna suggests she and Finn say a proper farewell to their partnership.

Jordan questions Valentin on a visit to a prisoner he made.

Franco asks Jim what he’s doing at his home.