Monday January 8, 2018: Sonny and Jason talk to Anna about Faison, Joss hopes Oscar will ask her to the ball, and Sam is eager to get married. 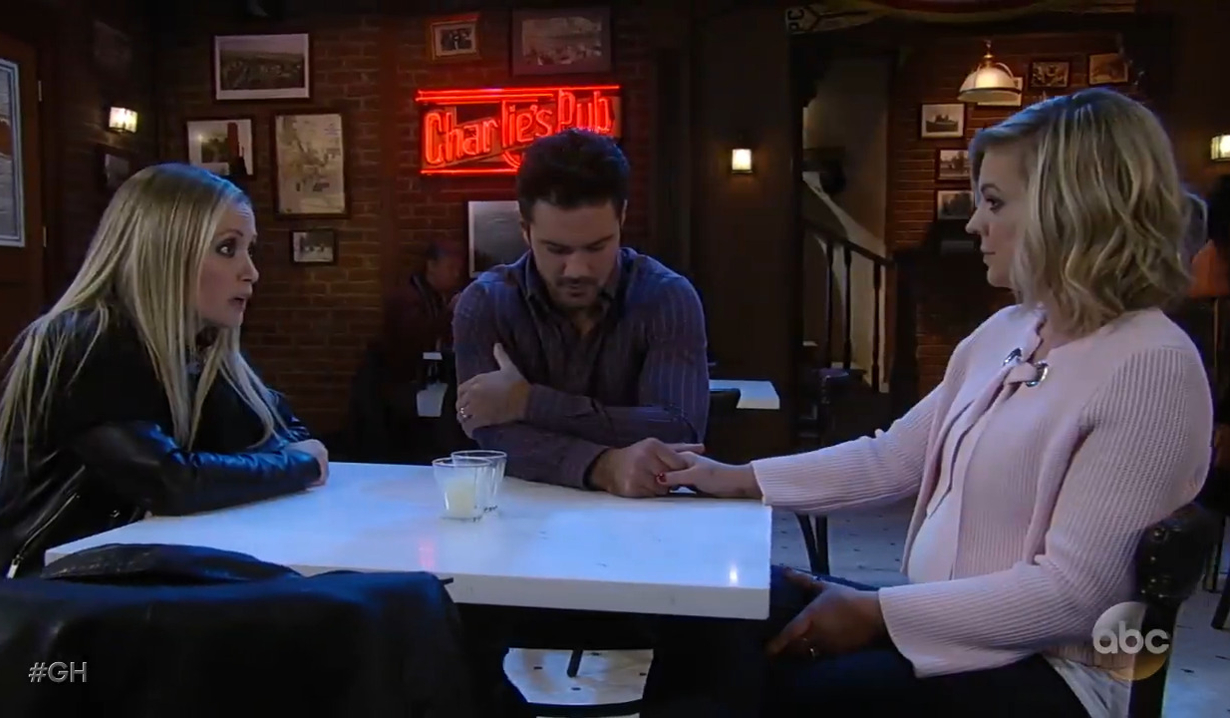 At Charlie’s, Maxie assures Nathan that she’s not worried their baby will turn out like Faison. Lulu butts in and demands answers. Nathan explains that Faison is his father. After he leaves, Maxie starts freaking out that her child will inherit Faison’s genes. Lulu tries to talk her around, but Maxie is unconvinced. Lulu continues trying. They realize Faison doesn’t even know Nathan is his son. Maxie runs out the door.

At the PCPD, Jordan tells Dante that the Feds were impressed by how quickly he closed the case on Cassandra. After she takes off, Nathan shows up and tells Dante who his father is. Falconeri tells him he’ll have to learn to live with it and details his complicated relationship with Sonny. Dante assures his friend that he’s already chosen to be a good man, he doesn’t need to reject Faison. Nathan wants to smoke his father out and put him behind bars. Lulu arrives. When her husband steps away, she tells Nathan that they should work together to take Faison down. At the hospital, Anna catches Finn trying to leave. He wants to tell the cops what he did. She tries talking him out of that. As they bicker, Sonny interrupts. Anna orders Finn to take a nap and talks to the mobster and Jason in the hall. They inform her that Nathan is Faison’s son, but he’s not the one they are looking for. They think the traitor, St.Clair, is the other son. Anna remembers that there is another woman who could have had his son, Desiree, but she’s been dead for decades and all traces would have been eliminated. She offers to talk to the WSB and begs them to move on. Meanwhile, Jordan arrives in Finn’s room. He’s about to tell her what he thinks happened to Cassandra when Anna returns and explains he was too incapacitated to do anything. The cop tells them they already know who injected Cassandra and left her to die. It was her accomplice, Eric. He confessed to everything so that closes the case. Jordan wishes them well and exits. Since Finn is determined to leave, Anna insists that he come home with her.

Carly arrives at home and catches Joss bopping around. She talks about the upcoming Mad Hatter’s ball, sure that Oscar will ask her. After showing off her dress, she runs upstairs. Carly gasps that her girl is growing up. Oscar arrives and Joss opens the door as Carly makes herself scarce. He thanks Joss for giving him the book about the Quartermaines. Things are awkward. She gets frustrated. He’s perplexed and apologetic. Joss kicks him out and starts complaining to her mom. Oscar returns in a Mad Hatter’s hat, drops on his knee and asks her to the ball. She’s impressed and happy to accept. As Joss promises him a night that will blow his mind, Carly listens in horror. At Aurora, Drew worries about not knowing himself. Sam says he knows his heart and asks him to get married today. Although she’s ready, he points out that there is a 24 hour delay between the license and the wedding.

Sonny and Jason return to the office. Corinthos calls Brick and asks him to dig up Desiree. Sonny asks Jason about Sam, who suddenly calls and asks Jason to meet her at the office. Stone Cold heads out. Maxie rushes in and begs Sonny to keep Nathan’s paternity a secret. He assures her he will stay quiet.

Back at the station, Jordan tells Dante that it seemed like Finn was going to confess. He reminds her they already have a confession. They both seem a little doubtful.

Alexis faces off with Molly.

Michael has to accept Nelle’s choice.

Jim Harvey Reveals a Connection to...