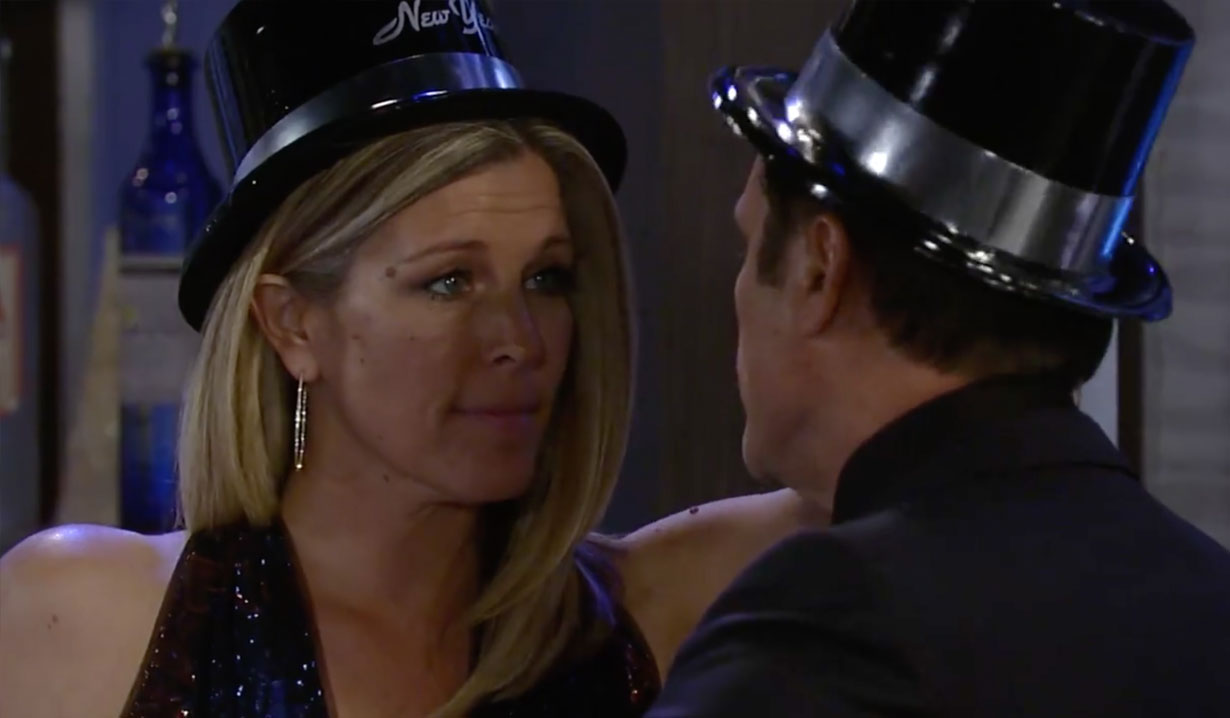 At the Metro Court, Sonny grills Carly about what she did to Jason, Drew and Sam. She explains everything, and Sonny warns her that she has to stop poking the bear, and Jason being with Sam is something Jason must decide for himself.

Jason and Sam kiss under the fireworks on the deck of the Haunted Star. Drew arrives after the kiss and asks what is going on. They all compare notes, and Drew realizes that this has Carly written all over it. He tells Jason to speak to his bestie and tell her to back off. Jason leaves on the boat Drew came on, and promises to check on the tugboat that the Harbormaster was sending. Drew and Sam head inside, and he notices the tequila and dominoes out. Drew is displeased, and confronts her about still having feelings for Jason. Drew wants her to be honest with herself. Sam explains to Drew that she will always be grateful for Jason helping her to become the person she is today, and that person loves him. They kiss, and wish each other happy New Year.

At her place, Ava gets a call from Griffin, who is working at GH. He wishes he could be with her tonight, but anticipates good things for them in 2018. After the call, Ava grabs her coat and heads out. At Anna’s, Cassandra informs Finn that GH will get a note from Anna indicating she and him ran off together in love. While Anna is dealt with, the two of them will be on their way to China to work on their new business venture. She blows a powder from her compact in his face, which she explains is a form of the opiates he’s been developing for her. Finn becomes dizzy and stumbles across the room. She hopes this wets his appetite, and laughs that he’ll make her new drugs and she’ll pay him with a supply of them to feed his addiction. When she jokes maybe Anna will want a high of her own, Finn goes into a rage. Cassandra’s man Eric holds Anna and Valentin hostage in a warehouse. When he leaves them alone, Valentin says he noticed the metal bracelet she was wearing when she was brought in and believes it may cut their ropes. Anna manages to cut herself free, and takes down Eric when he returns. She frees Valentin and the two take off. At GH, Ava finds Griffin thanking Kiki for sticking with him because he knows this hasn’t been easy. They hug, and Ava confronts them on what is going on. Kiki explains they were discussing a patient, and thinks her mother is trying to control her life again. Kiki storms off, and Ava all but accuses Griffin of taking up with her daughter. Ava walks off. Meanwhile, Kiki gets a text containing a picture of a plane ticket. Nina bumps into her, and asks if her husband has been brought in, maybe having been in an accident. Kiki finds no record of anyone matching Valentin having been admitted. Later, Kiki talks to Dillon, who sent the photo, and wishes she could be with him for their anniversary. He suggests they meet half way in Omaha, and she agrees. Griffin follows Ava home demanding to know what is going on. Ava admits she followed him and Kiki the other day and saw how close they were getting. Griffin can’t believe she is accusing him of having an affair with Kiki, and asks when she’ll accept that he cares for her. She admits she will always feel her scars will be a barrier between them, and that’s not fair to either one of them. Griffin decides it is time for her Christmas present. Griffin tells Ava that he and Kiki have been studying Klein’s formula and modifying it so that it is safe and legal. Ava is speechless because nobody has ever done anything like this for her before. The two kiss, which leads to the bedroom and sex.

Back at the Metro Court, Michael drops by to wish his parents a happy New Year, and fill them in on Nelle’s blood pressure situation. Jason arrives, so Sonny takes Michael off to let them talk. Jason informs Carly that he loves Sam, but Sam is happy with Drew and they have a family. He doesn’t want to be the one who causes Sam pain, and begs Carly to stop. Later, Carly pours them all champagne to toast the New Year. Jason thanks them for believing in him and says he’s happy to be home. Elsewhere, Valentin reconnects with Nina and pulls her into a hug.

Anna returns home and finds Cassandra unconscious on her floor and Finn stumbling around the living room.

Franco tells Liz she can’t hang the painting of him and Drew in their house.

Kevin informs Laura, “This is the key to your future.”

Alexis meets Curtis, Molly and TJ at Charlie’s, and feels she isn’t here for just breakfast.

Ned and Michael square off about what is best for ELQ.

Olivia asks Julian what his angle is.

Jordan asks Anna what kind of undercover operation has she been running in her town.

In the hospital, Finn says to someone, “There is something I need to tell you.”

Laura Isn't Sold on the Idea of...