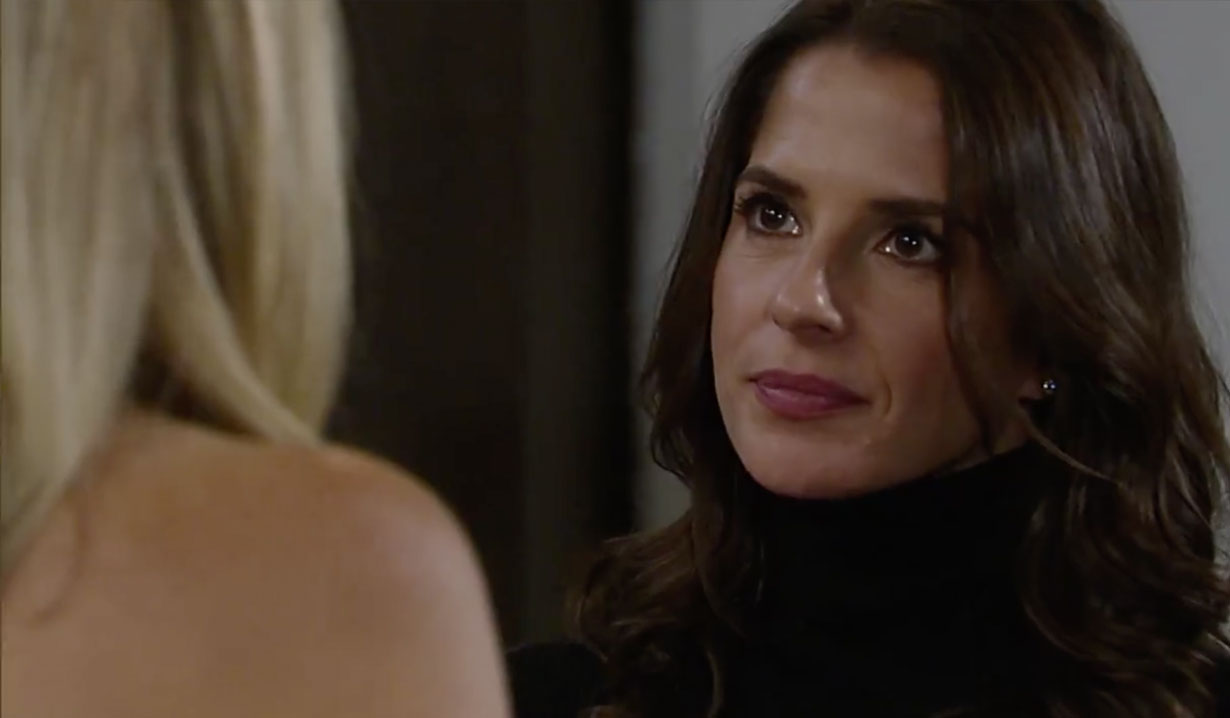 At Aurora, Sam, Drew, Nina, Nathan, Maxie, Lulu, Dante and Peter gather as Peter toasts to them and to a great New Year. Up in the Metro Court restaurant, Jason reveals to Carly and Sonny that he has a plane to catch to Russia, where he hopes to get a lead on Faison. Carly runs off, and heads up to Aurora to extend an invite for them to join the big party in the restaurant. Sam and Drew reveal they have rented the Haunted Star to watch the fireworks. Drew decides to run by the hospital and see Monica to wish her a happy New Year. Maxie talks with Sam about her drab outfit, which she refuses to let her wear on New Year’s Eve, so she takes her to raid the Crimson closet. Everyone else heads off to the party except for Peter. Lulu returns after she realizes she left her purse, and talks with Peter about taking on another story. He asks her to write about Faison’s involvement in what happened to Jason and Drew, and try to locate where he’s hiding. Back in the restaurant, Sonny accuses Jason of running away from Sam. Jason admits he is, but he’s not running away for good because his kids are here. He tells Sonny that Jake is not handling this well, but Sonny thinks the boy will come around and feel that connection to him, just as Sam will. Carly reconnects with Jason later, and learns his flight has been delayed. She pretends to get a text from Sonny, and tells Jason to meet Sonny at the Haunted Star because he has information on Faison. Meanwhile, Nathan, Dante and Nina talk about Nathan becoming a father. Nathan brings up his worries over his genetic history and not knowing if he’s a Cassadine, which makes Nina realize that is why Maxie yanked Valentin’s hair out the other day. Michael brings Nelle to GH because she keeps getting dizzy. She heads into the exam room, while out in the hall Drew runs into Michael. Drew explains he wanted to see Monica to wish her happy New Year, and asks why Michael is here. Michael reveals he’s here for Nelle. Drew asks Michael if he is sure the baby is his. Michael isn’t, but is planning a DNA test. Later, Monica fills Michael in on low blood pressure being behind Nelle’s dizzy spells, and says she needs to just take it easy. At Anna’s place, Anna works on getting her computers tuned in on the bug Finn planted in Cassandra’s phone. Finn hopes they can nab Cassandra quickly because Cassandra has a problem keeping her hands to herself. Anna can’t believe it because he’s supposed to be unavailable. She hopes he didn’t lead Cassandra on, which Finn takes offense to because he’d never cheat on her, whether their relationship is fake or not. Suddenly, Anna’s computers start chiming. Valentin finds Cassandra and her associate sitting in his living room. She tells him that she’ll be leaving town to put an appearance in at the factory, and needs him to come with her. She also needs him to eliminate Sonny Corinthos. Cassandra gets a call from her lab and learns the formula Finn worked up will work.

More: GH spoiler video of Sam and Jason together on New Year’s Eve

Maxie takes Sam and her wardrobe selections to the Haunted Star so she can see how the dresses look in the boat’s lighting. It comes down to two dresses, and Sam doesn’t know how to pick between them. Maxie leaves her to decide. Later, Sam is shocked when Jason walks in.

Back at Anna’s, Anna listens in on Cassandra’s call and orders the WSB to trace the source of it. They get a hit, and Anna believes they’ve located Cassandra’s factory so she orders a strike team. Later, Anna gets word the raid was a success and they’ve taken over the factory. Finn declares they’ve won, and hugs Anna. Anna reminds him they still have to take care of Cassandra and one other thing.

Cassandra orders Valentin to hustle because they need to go to the lab. He refuses to up and leave his family on New Year’s Eve, grabs her phone out of her hand and tosses it across the room. She tells him to take the night with his family, but be prepared to go in the morning. On her way out, Cassandra’s right-hand man informs her that there was a bug in her now broken phone. Meanwhile, Valentin calls Anna, and learns Cassandra’s factory was taken, and she has men out trying to apprehend Cassandra as they speak. Cassandra suddenly returns, and her man aims his gun at Valentin. She demands he not put up a fight and come quietly with her.

Anna asks Finn if he wants to stay. He says he’d love to.

Lulu thinks Nina is covering for whatever Valentin is up to his neck in.

Cassandra has her man beat the truth out of Valentin.

Anna Disappears As Jason and Sam...