Anna Begins to Panic As Finn Plants a Bug on Cassandra

Wednesday December 27, 2017: Ava gets jealous, Obrecht remains cagey about Nathan’s father, and Kevin has a suggestion for Laura. 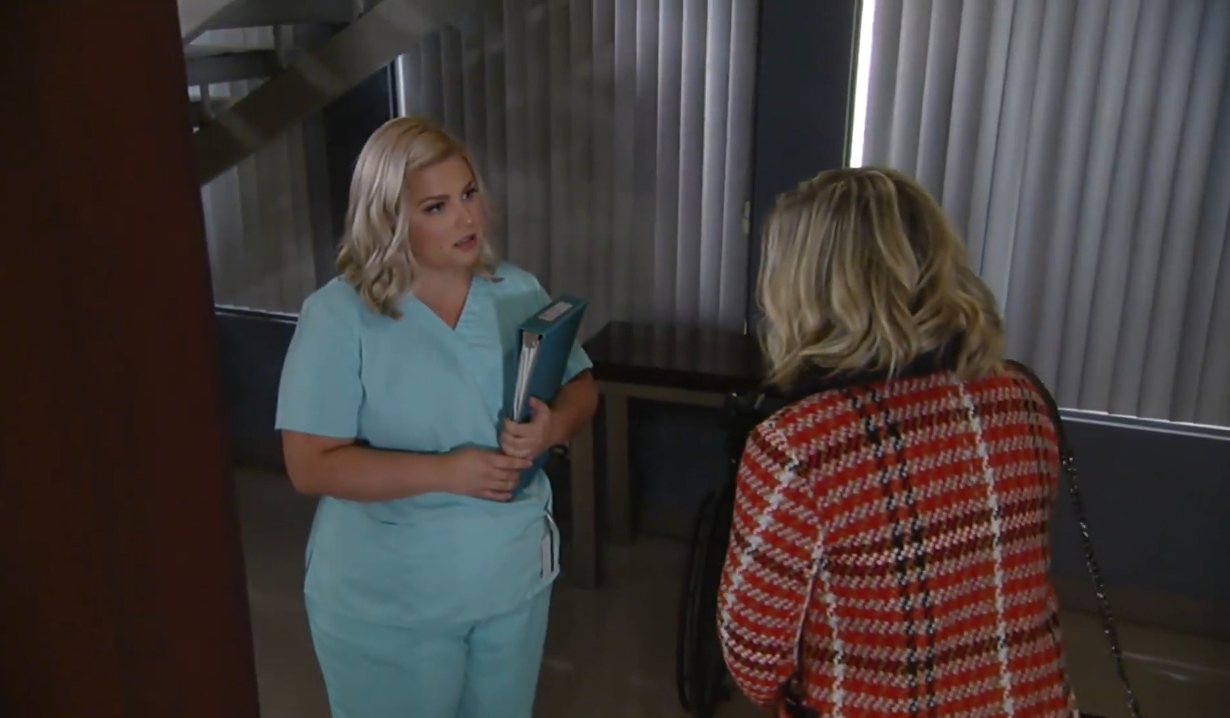 When Kevin and Laura arrive at the hospital, Kiki congratulates them on their marriage and putters off. Laura realizes she doesn’t know what her name is now. She’s not Laura Spencer anymore, she wants to be Laura Collins. That sounds good to him. He heads off to work and she runs into Stella, who tells her about her lousy landlord and his relationship with Lomax. Laura runs off to tell Kevin. He says he will support her but it’s time for their honeymoon. She can’t leave town now. Stella returns and asks again for Laura’s help. Kevin suggests they stop by the PCPD on the way to the airport. Over at the nurses’ station, Maxie orders Amy to run a DNA test for Nathan. Amy protests and says the cop isn’t into ‘backdoor shenanigans’. Maxie orders her to do as she’s told. Amy agrees. Liesl happily joins Nathan at Kelly’s. She gives him his Christmas gift. It’s a cuckoo clock she bought when she was pregnant with him. She gets choked up and tells him they have a chance to make things right. He asks what she’s not been telling him about his father. Obrecht asks him to let it go. The cop keeps pressuring her, but she tells him to concentrate on the future. After she leaves, Maxie arrives. He shows her the clock. She’s not impressed. Griffin is at Ava’s. She gives him a fancy watch, but he can’t accept it. It’s too much. She understands but is upset. Ava begs him to take it and he gives in. They make out until Kiki shows up. The nurse talks about missing her boyfriend. Ava goes off to get her gift. When she returns, she finds them whispering together. She interrupts with Kiki’s gift, a doctor’s bag. Kiki gives her mom a scarf. “Another scarf for me to hide in,” Ava snipes, before making a crack about her daughter and Griffin. The doctor tries to keep the peace. Kiki storms out and Ava sends Griffin away.

When Ava shows up at the hospital, she eavesdrops on Griffin and Kiki again. Kiki assures him she has no second thoughts and they run off. At the Metro Court, Anna instructs Finn to plant a bug in Cassandra’s phone and asks him not to get killed. She wishes him good luck. He goes in to see Cassandra, who sends her colleague into hiding. Anna listens as the doctor and the drug dealer chat. She makes him turn off his phone. He gulps. Anna loses her feed and panics. Felicia suddenly interrupts and starts quizzing her about Finn. Devane tells her all about the doctor. It sounds to Felicia like she’s in love. They bicker about this and Felicia tells her to dive into love. Back in the room, Finn and Cassandra go over some chemical details. He needs access to her factory. When they toast with champagne, he spills it. She rushes off to get a towel and he shoves the bug in her phone. When she returns, she towels him off and suggests they take a little trip after seeing the factory. He claims he’s tempted but it would be wrong. The doctor heads out and updates Anna. She says the whole charade will be over soon and they can go back to their lives. They both awkwardly look away. At the PCPD, Dante and Jordan assure Lulu that her work will put Lomax out of office. Alexis arrives in time to contradict this. She explains city council thinks Lomax is an embarrassment, but they can’t fire her. Lulu is still determined. Dante takes her into the interrogation, impressed by her pep. They make out. When they return, Alexis explains that the city council can refuse to pay Lomax and that will probably make her quit. Felicia, Stella, Kevin and Laura arrive to talk to Jordan about the landlord. Lulu tells them all about her article and the mayor being indicted. Alexis gets an update that Lomax has already stepped down. They wonder if Felicia will be the new mayor. Felicia says she’s not interested. Kevin suggests that Laura run.

Anna has some success.

Lulu has something to look forward to.

Carly Schemes to Get Jason and Sam...