Tuesday December 26, 2017: Nathan worries about his father's identity, Lomax's election is declared invalid, and Kim offers Drew something to help jog his memory. 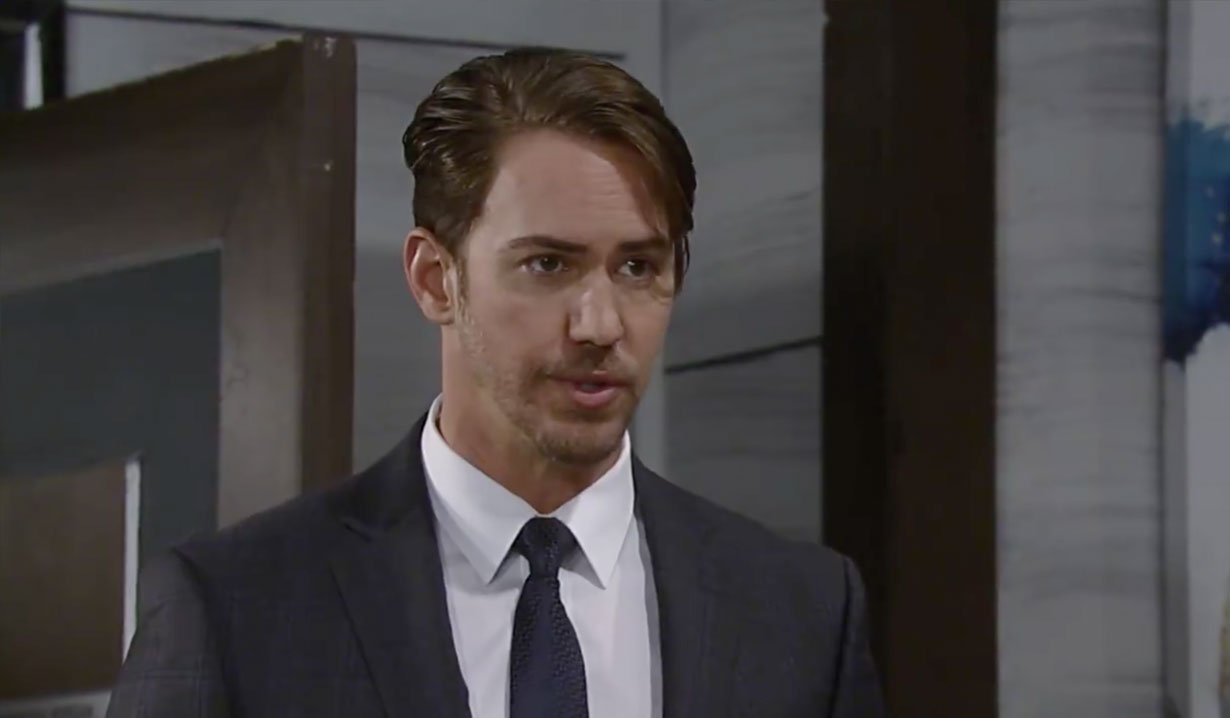 Anna brings Finn to Sonny’s gym to teach him self-defense. They get into the ring, where Anna drops him quickly to make him realize the danger he is in. He doesn’t see why it matters as he’s just another asset to her, but she informs him he is more than that. Finn moves in for a kiss, and takes Anna down by applying pressure to one of her carotid arteries. She doubts anyone else will ever let him get close enough to try that. Finn’s phone rings and he sees it is Cassandra. He takes the call, and she asks him to meet and review her formula tomorrow. He agrees. Anna wishes he would reconsider, but won’t let him go up against Cassandra unprepared.

More: Miracles and Grinches on Christmas in the GH blog At Kelly’s, Lulu drops off Charlotte with Nina and Valentin. Lulu wonders if any of them read her article. Valentin did, and suggests she write a follow-up article about her brother’s likely involvement in the election tampering. Lulu leaves, after saying goodbye to Charlotte. Later, Cassandra crashes Valentin and Nina’s reunion with Charlotte. Maxie and Dante meet with Kim at her office, where Nathan explains his mother may not have been so truthful about his father or his medical records. He’s worried about his family’s history of Beta thalassemia, but Kim notes his test came back negative, and Victor was never tested. She says without a DNA sample from Victor, there is no way to even prove if he is Nathan’s father. However, everything indicates they will have a healthy baby. Peter August drops in on Sam at Aurora and asks who actually owns this company. Sam explains that Jason is giving the company to her and Drew. He thinks an interview with the three of them would benefit the company, but she refuses. He suggests to her if Drew’s story was put out there then people with information on him might come forward. Sonny drops by Drew and Sam’s place to fix things between them. Drew invites him in. Sonny swears he is still his friend. Drew apologizes for how he acted when Jason returned, but as much as they may still be friends, their lives are moving in opposite directions and don’t fit together. At the PCPD, Lulu drops by to see Dante, and Jordan thanks her for breaking that story on Lomax, who is no friend to her. Lulu confides to Dante that she’s worried Nikolas helped Lomax rig the election. Dante says any evidence of that is circumstantial. Mr. Greenfield from the board of elections arrives and reveals the ballots Lulu found are authentic, and Lomax’s election is invalid.

Sam stops by Kim’s office at GH to speak about Drew’s past. Kim fills Sam in on meeting him outside of a bar, and from the start of their dating he made it clear he could be deployed at any point. She knew there was no future with Drew from the beginning. Kim explains he never opened up much, but that he grew up in a group home and went to high school somewhere in upstate New York. Sam knows Drew’s memories are gone, but he felt she was familiar the first time he saw her. She thought if they could find something about his past it might jar his memory. Sam thanks her for her time and leaves.

Back at Kelly’s, Nina sends Valentin and Charlotte off to have the cookies they ordered boxed to go. She then warns Cassandra never to come near Charlotte again. Nathan and Maxie walk in on her threatening Cassandra, and ask if everything is okay. She assures them it is, and asks Nathan how the baby is. He tells her everything seems okay so far, but continues to fret over whether Victor is his father. Nathan leaves for work, and Maxie gets an idea. She pretends to fix Valentin’s hair by polishing his appearance, but rips a strand of his hair out to test against Nathan’s DNA.

Lulu heads to Aurora to see Sam, only to run into Peter. She asks Peter for a staff position given the article she gave him, but he says he wants a story not an article. He instructs her to follow up with another article. She tells him the ballots are official, so he thinks she needs to write about that.

Sam returns home to find Drew talking with Sonny. Sonny decides to head out, but tells Drew if he ever needs anything to just ask. After he leaves, Drew tells her that he and Sonny were just coming to terms with their new reality. Later, Kim drops by with the mix CD that he once made for her, and thought maybe it will help him remember something.

Lulu asks Dante and Jordan how long it will be until Lomax is forced out of office.

Nathan confronts Obrecht about what she’s not telling him about his father.

Cassandra tells Finn that he’s not the man she thought he was.

Anna, listening in on Finn, exclaims, “Damn, no!”