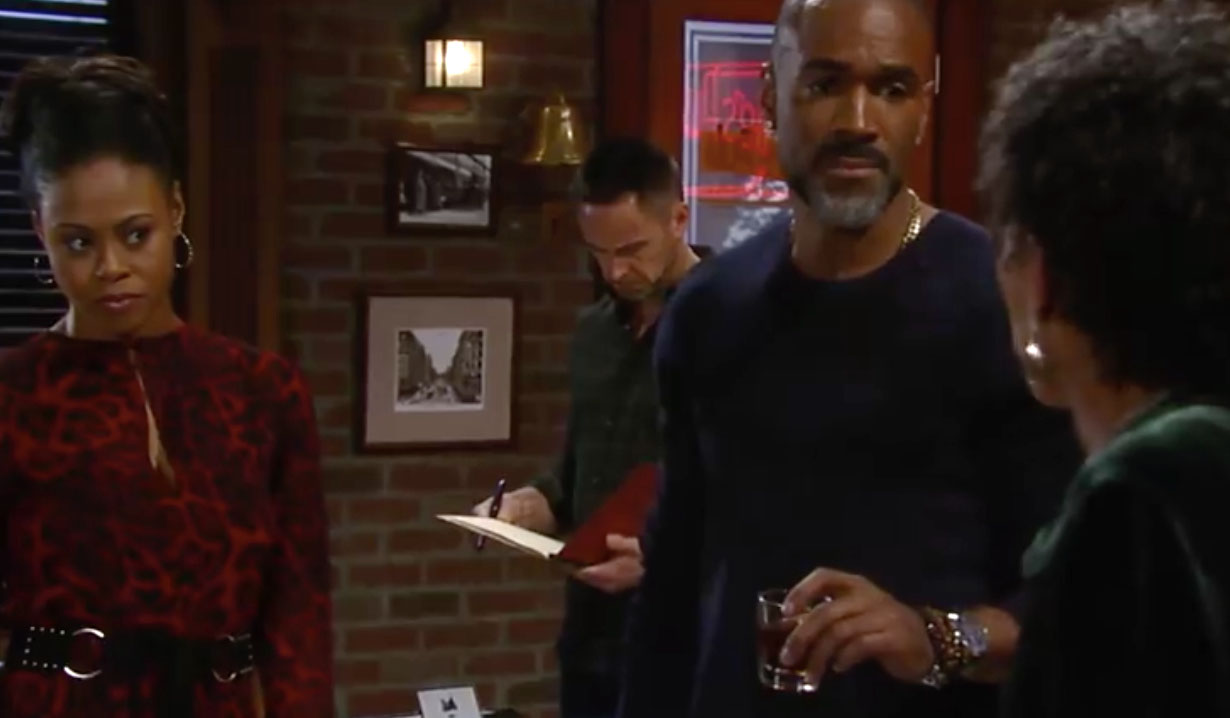 Michael joins his parents at Sonny’s for Christmas. They discuss how far they’ve come from last year, with Carly crediting Morgan. Jason stops by and Michael, thinking about his child, asks how he ended up a Corinthos and not a Quartermaine. He wants to understand the choices they made to help him make his own decisions. Carly, Sonny and Jason explain the whole messy ordeal. Michael asks if having him made Carly a better person. She says, no. Loving him did. The doorbell rings and Michael opens the door to Nelle, who passes out in his arms. She comes to on the couch with everyone staring at her. She explains she was driving home after discovering Kelly’s was closed and came upon a downed tree. She didn’t mean to come there, but she was feeling faint. Sonny brings Nelle some broth to sooth her. Michael asks if she’s okay. Nelle looks around and says she will be just fine. Jason follows Carly to the foyer. She compares herself to Nelle and recalls how wonderful he was to her when she got pregnant with Michael. She gives him a present, which is a key to their house. She wants him to know he’ll always have a home. He knows that. She hugs him and welcomes him home. Carly makes up a bed for Nelle and Michael helps her upstairs. Carly tells Sonny and Jason they’ve been through worse than Nelle Benson and they’re still standing. Sonny makes a toast to those they love, lost, those who came back and to family.

Molly and TJ host Christmas dinner at their place. Stella talks to Alexis about Thomas and how he was taken too soon, as Jordan and Curtis uncomfortably look on. Things get even tenser when Stella suggests Alexis call Kristina and connect with her while she still can. The dig at Jordan doesn’t go unnoticed as TJ asks if anyone needs a drink. Curtis asks for a double. The power goes out before the food is finished. With the icy roads, they can’t drive anywhere, so Stella suggests they go to Charlie’s. Ava and Griffin stop by a closed Charlie’s so Ava can wish her brother a Merry Christmas and congratulate him on his new life. Julian wonders why Griffin is there. They tell him Griffin didn’t want her falling on the ice while he waited in the car. Griffin and Ava leave for church, but return because the roads were too icy. They find the Ashford crew waiting outside the locked bar. Ava bangs on the door until Julian lets everyone in, including a reluctant Alexis. Julian tells everyone they can stay and that there’s still food in the kitchen. Molly and TJ go to reheat it, as Jordan and Stella get into it again. Julian tries to talk to Alexis but she lashes out at him, causing Griffin to intervene, which sets off Julian. Molly and TJ survey the scene and sneak out. Griffin orders everyone to put their differences aside and be decent to each other since they’re stuck there. His attempt at peace doesn’t work, as Julian, Stella and Jordan make snide remarks about forgiveness. Just as Julian discovers the kids are gone, TJ and Molly return reporting the homeless shelters are overcrowded and need supplies. Alexis asks Julian if he has any blankets he can donate, but he has a better idea. As Laura worries her and Kevin’s wedding has been derailed, Lesley Webber (played by Denise Alexander) enters the church and embraces her daughter. Lesley turns to Kevin to welcome him to the family and explains her friend is a storm chaser who flew her in. She then introduces them to her new boyfriend Marcello, who walks in. When Maxie notes there’s still no minister, Lulu suggests Lesley perform the ceremony. Laura says no because she previously married her and Scotty. Marcello chimes in to offer his services. The only snag is, he doesn’t speak English. As the women help Laura get ready, Bobbie gives her Aunt Ruby’s handkerchief. Once ready, Laura walks down the aisle to Kevin. Lesley plays interpreter as Marcello presides over the ceremony. Kevin says he’s glad he answered Laura’s ad in the beginning, which led to him meeting the love of his life. Laura in turn thanks God every day she has him in her life. She didn’t think she’d get to do this again. She will love him every day for the rest of her life. They exchange rings and kiss. Dante and Nathan get a weather advisory alert saying they all must stay off the roads. They break out champagne and toast. Maxie tears up thinking about celebrating her and Nathan’s baby next year.

Nathan is worried about the baby.

Lulu asks Valentin if he read her article.