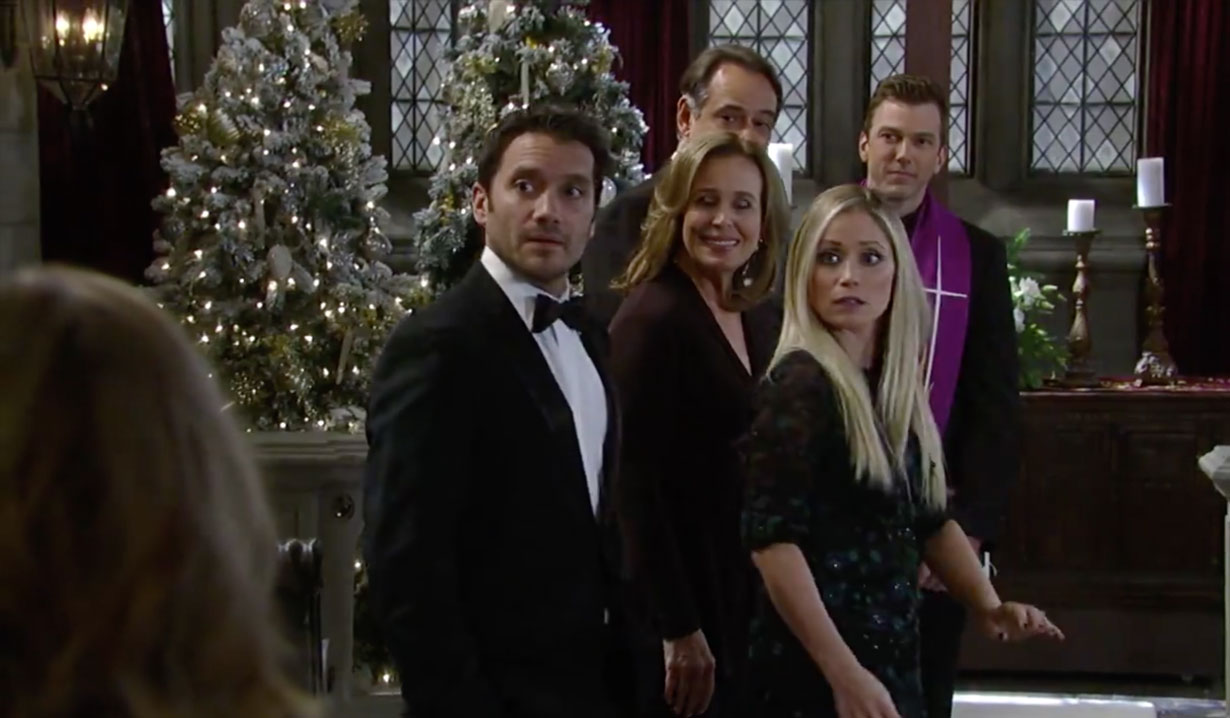 Joss meets Jason at Kelly’s and gives him a sketch pad and pencils to give Jake as a gift because he loves to draw. Jason thanks her for the help. He takes off as Oscar shows up. Joss surprises Oscar with a gift, a book by his great-grandfather Edward. He gives her a present, her very own mix CD just like Drew made his mom. At their place, Sam finally gets Scout down to sleep, and tells Drew that he should go to Monica’s and she’ll come later when Scout wakes up. Drew agrees, but before he goes, he produces a ring for Sam. She is thrilled and asks him to put it on her, which she does.

At the Quartermaines, Monica, Olivia, Ned and Leo gather for the holiday. Kim arrives, per an invite from Monica, but Oscar decided at the last minute he wasn’t ready to meet everyone. Drew arrives and catches up with Kim in the living room, and she surprises him and Monica and with books of photos of Oscar growing up. Maxie and Nathan walk in on Kevin, Laura, Lulu and Dante at the church altar, and Maxie thinks they can’t go through with the wedding because they’ve seen each other before the actual wedding. Laura and Kevin don’t believe in that old superstition. Maxie and Lulu help Laura get ready in the bride’s room, and are joined by Bobbie. Later, Bobbie has to be the bearer of bad news, a storm has rerouted flights and Lucky and Spencer aren’t going to make it in time. In the church, the reverend gets a call that his wife’s water broke and he has to go. Laura goes out to the church to see Kevin and says they need to face that there isn’t going to be a wedding tonight unless a miracle occurs. Suddenly, someone arrives at the church, shocking everyone. Back at Liz’s, Jason arrives with his gift for Jake. Jake isn’t pleased to see Jason, exclaims he already has a dad, and doesn’t want Jason there. Jake runs upstairs, and Franco follows to check on him. Liz tells Jason they just need to take things slowly. She also reveals that she and Franco are getting married, which he’s not thrilled about. Franco listens in as Liz assures Jason that Franco is a different person now, and she knows the evil in him was because of that tumor. Jason leaves, and Franco asks Liz how she’s doing. She thinks it’s going to take time, and hopes one day Jason and he can be civil. She is glad he has a truce with Drew, who has no reason to have a vendetta against him. Later, Liz gets the mail, and Franco receives a Christmas card from Betsy. She hopes one day he will forgive her and can find peace, which Liz finds puzzling because it was Drew she wronged.

Jason drops by Sam’s place to give Danny his present. Sam says he’s at the Quartermaines, but he can leave the gift under the tree if he wants. He thinks that would be a good idea, and notices Sam has a new ring. She tells him that she and Drew are getting married. She assures Jason once they start to get things straightened out that they’ll move out of his penthouse, but Jason wants her and his son to stay there. He also plans on letting her and Drew keep Aurora, and tells her to consider it a Christmas gift. They wish each other a Merry Christmas, and Jason heads out.

Sam and Scout finally arrive at the mansion, and Oscar decides to show up. Oscar meets everyone. Olivia takes Ned aside and scolds him for giving Kim and Oscar the cold shoulder over this ELQ nonsense. Ned is only trying to protect his family, but Olivia wishes he’d be more open. Drew gets a chance to talk to Oscar and advises him that the family can be overwhelming, but they mean well, and he promises he’s here if Oscar needs anything. Ned notices Oscar eyeing his guitar, and the two bond over their love of music. Ned explains that it is a tradition to sing before they eat on any holiday. Ned plays “Silent Night,” and everyone joins in. Sam meanwhile thinks about the Charlie Brown Christmas tree she and Jason had one year.

Back at Kelly’s, Joss runs into Jason as she’s about to head home. She asks if he wants to ride home with her, but he says he’ll catch up with her and the others later. Jason thinks about his and Sam’s first tree as the snow begins to fall outside.

Laura’s mom (played by Denise Alexander) arrives at the church.

Alexis screams, “What is wrong with you!” at Julian.

Aunt Stella wishes she was able to make it home in this storm so she didn’t have to spend time with Jordan.

Nelle collapses and Michael catches her.

Lulu Pitches the Voting Scandal to...