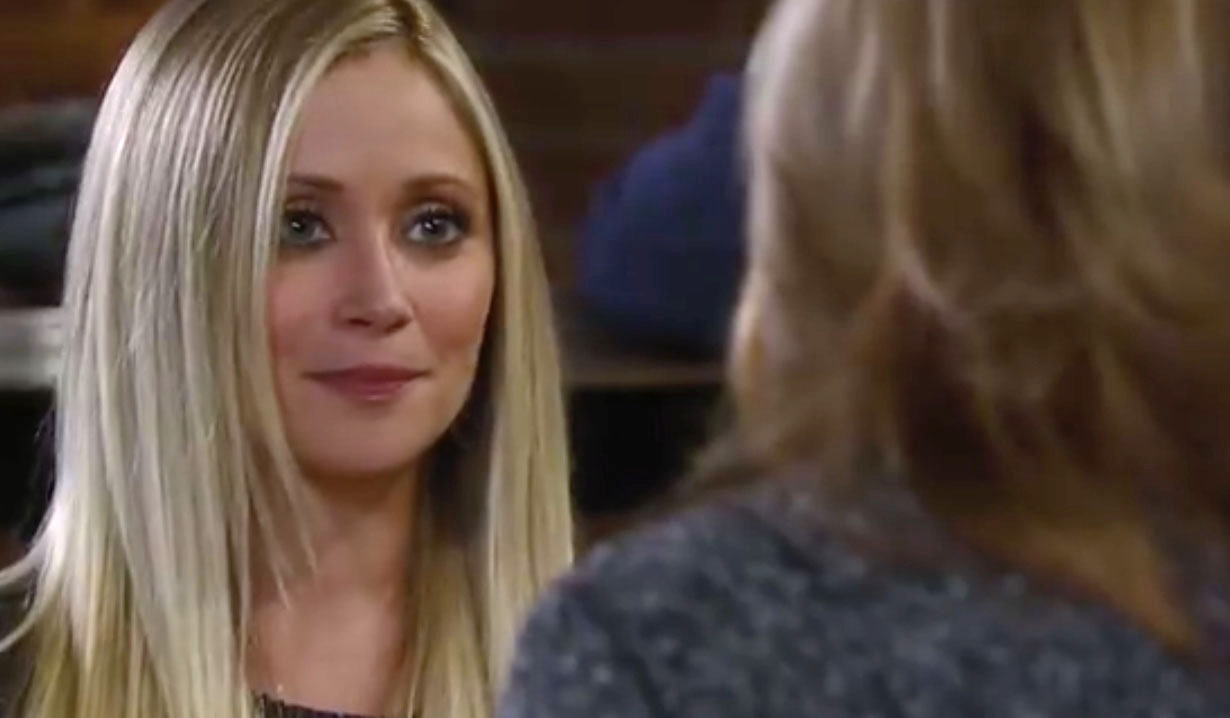 Nelle sits at the counter at Kelly’s, eyeing Lulu, who looks at the voter ballots. Lulu hides them when her mother walks in. Michael shortly follows. He beelines it for Nelle, who immediately mentions her financial needs. Michael hands her the want ads. She’d rather have an allowance from him, but Michael will not let her live off him. They debate her trustworthiness. Nelle urges Michael to remember their child was conceived in love. He wishes her luck with the job hunt and leaves. Shortly thereafter, Nelle finds something interesting in the paper and takes off. At a nearby table, Laura tells Lulu she is not only her daughter, but her best friend. She asks if she will be her matron of honor. Lulu readily accepts. Laura excuses herself to go to the Charles St. meeting, as Peter August walks in. Lulu pitches him the voting scandal as a story. Kevin enters the police station to ask Dante for help with his wedding. Kevin tells his future step-son-in-law that Mac and Felicia will be out of town for the holidays. Will he stand up for him? Dante would be honored. After Kevin has left, Lulu rushes in asking Dante for help. They go over the ballots in the interrogation room, with Dante worrying about the repercussions of her story. Lulu points out the voters have a right to know if the election was stolen from them and that their voices count for something. Griffin and Julian face off at the gallery. Ava intervenes asking them to play nice. The men continue to trade barbs until Julian leaves. Griffin assures Ava that while he sees no redemption in Julian, he’s seen the change in her. She defends her brother. He worries Julian will lead her down a bad path, but Ava doesn’t need Julian to lead her astray. She can falter all on her own. Griffin leaves when Nelle races in. She asks about the assistant job and Ava immediately hires her. Nelle hopes Ava isn’t doing so to stick it to Carly and Sonny. Ava hopes the same on Nelle’s part. Nelle smirks. Molly and TJ meet Alexis at Charlie’s Pub for a town hall meeting. Molly rants about Lomax’s plans for gentrifying the neighborhood which will price people like them out. Alexis half listens as she nervously eyes the room, presumably looking for Julian. Molly notes her weird behavior, as Ned walks in. Alexis sees her chance to escape her daughter’s questions and runs over to talk to her ex. Alexis asks if Ned is onboard with the gentrification project. He responds, wouldn’t it be better for ELQ to help spearhead the development instead of a faceless corporation? Alexis doesn’t think Michael will agree. Lomax approaches them and exchanges snide remarks with Alexis. Outside the pub, Laura meets up with Kevin. She sees Lomax (played by Shari Belafonte) through the window and says she doesn’t want to give up the neighborhood without a fight. Kevin says her fight is his fight. Back inside, Molly can’t believe it when Julian walks in. She rants until Julian tells her he owns the bar. Across the room, Michael finds Ned and disparages Lomax’s plans. Ned makes his case for ELQ to get involved. Michael isn’t saying no just yet. Lomax gives her spiel to the crowd to make Port Charles a premiere mid-sized neighborhood. She receives push back from Molly and TJ, both of whom Julian defends. Next, Laura gives an impassioned speech about her long history in the community, bringing up Mary Mae Ward. She asks everyone in the room to vote no on the proposal. The crowd cheers, as Peter sits in a corner observing. Lomax announces the vote will be next month and adjourns the meeting. Molly vents to TJ as Alexis thanks Julian for sticking up for her daughter. Meanwhile, Ned continues to try and convince Michael to take on the project. Nathan and Maxie go over Victor Cassadine’s medical records at home. Nathan has a few follow up questions about them for his mother. Nathan leaves, as Felicia shows up to give Maxie Christmas presents. Maxie starts to worry about caring for a newborn, since she wasn’t around for Georgie. She asks, What if she’s not good enough to be a mother?” Felicia assures her everything will be fine.

Nathan meets his mother at Kelly’s. He notes Victor was never tested for a condition common in the Cassadine family. He wonders why. Liesl counters that since Nathan didn’t test positive for it, there’s nothing to worry about. Liesl acts unfazed as she flounces out, but her face darkens once alone.

Nathan steps off the hospital elevator and asks Griffin to look over Victor’s medical records.

Monica won’t turn anyone away who is part of the family.

Obrecht Warns Britt Not to Cross...