Obrecht Warns Britt Not to Cross Faison by Testifying Against Him

Tuesday December 19, 2017: Alexis and Griffin learn Julian is a free man, Danny learns the truth about his father, Kiki get bad news about Dillon, and Nathan believes Obrecht may have lied to him. 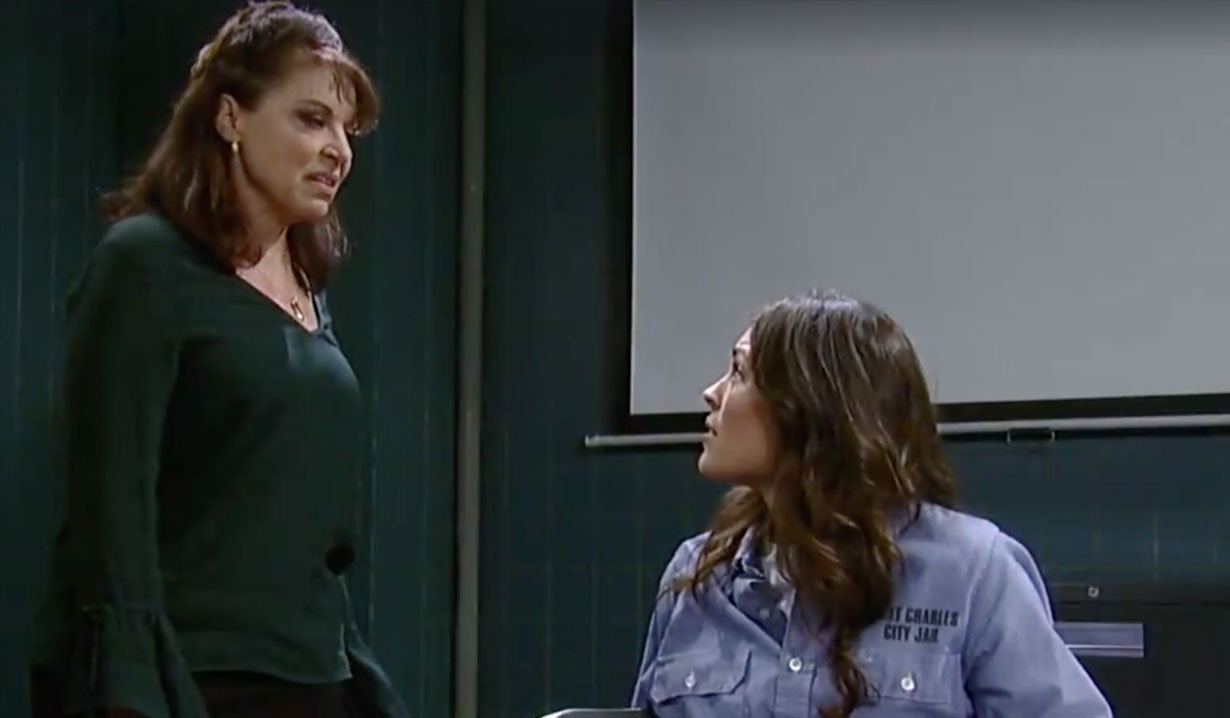 Curtis and Aunt Stella meet at Julian’s new place, Charlie’s Pub, which is in the heart of the Charles Street district where Stella moved to. Curtis surprises Stella with a housewarming gift, a piece of art, because he knows she always loved visiting the Baltimore Museum of Art.

At their place, Maxie and Nathan hang their stockings by the chimney, along with one for the baby. Nathan notes his mom is still being squirrely about his father’s medical records, and he’s starting to wonder if she lied to him about Victor Cassadine being his dad. Maxie thinks she was telling the truth, because it would be a terrible lie seeing there isn’t anyone worse than Victor Cassadine. At the PCPD, Obrecht visits with Britt in the interrogation room. Britt reveals she could get a reduced sentence if she provides evidence against Faison. Obrecht informs her that Faison doesn’t forgive betrayal, he punishes it without mercy, and if she turns on him then he won’t hesitate to kill even her. Britt promises not to say anything against her father, which relieves Obrecht. They change the subject to Nathan’s upcoming baby, and Britt asks why she’s not given Nathan his father’s medical records. Obrecht claims she is working on getting him the records. Griffin and Kiki visit Ava at her gallery. Kiki gets a call from Dillon and leaves to take it. Alone, Ava reveals to Griffin that the charges against Julian have been dropped and he won’t be retried. Later, Jordan drops by, and notices a piece of art she likes. Kiki accidentally sold its pair, so Ava offers her a deal on it. Alexis and Danny run into Julian at the town square. Alexis sends Danny to play on the slides, and Julian swears he wasn’t following her. He tells Alexis that he’s a free man, and he’s starting a new life as a pub owner. When Julian brings up Alexis’ doctor friend, she refuses to discuss her romantic life with him. He only wants her to be happy. Jason drops by his and Sam’s old place to see Drew. Jason fills Sam and Drew in on what he learned from Andre about Drew’s memories, and that the ornament he hid them in has gone missing. Alexis and Danny’s return interrupts their meeting, and Danny is excited to see his mom’s old friend again. Alexis leaves, and Danny thinks Jason looks like a man in the picture at his Grandma Monica’s house. Sam sends Danny to get a juice box from the fridge, and Drew suggests they tell Danny the truth. Sam, Jason and Drew sit Danny down to tell him the truth about his uncle and his father. Drew promises he will always love him, and it doesn’t matter what he calls him. Jason would like to get to know Danny, which Danny says he’s okay with. Danny and Jason hug. Later, Jason leaves, but not before he and Drew give each other a nod. Drew didn’t think anything could be harder than telling Jake the truth, but his heart is breaking all over again. Sam promises he will always have her, Scout and the boys. Drew reminds her they don’t even know who he really is, and she deserves to know that. Sam knows who he is and asks him to marry her. Drew accepts, and says this is a moment they’ll remember forever. Obrecht drops by Maxie and Nathan’s place to deliver Victor’s medical records. She quickly excuses herself and rushes out. Nathan looks through the records, and Maxie notes that Victor was incredibly healthy. Nathan can’t help but think something is wrong with the records.

Jordan crashes Curtis and Stella’s lunch at Charlie’s and presents her with the piece of art she just bought as a housewarming gift, which turns out to be the piece that accompanies the one Curtis gave her. Stella doesn’t think she needs two, and decides to return Jordan’s and donate the money to those less fortunate. Stella leaves to take a call from TJ, and Curtis tells Jordan that Stella just gets this way around Christmas because of Thomas. He knows things will get better. Back at the gallery, Kiki, learns Dillon isn’t coming home because he’s got a job on a new movie. She thinks she should give up on being a doctor, because she’s not sure it will even happen, and move to California to be with Dillon. Griffin talks her off the ledge, and she thanks him. Ava overhears and tells Griffin it’s like he’s becoming part of the family. Julian crashes the moment, and confronts the elephant in the room. He asks Griffin what they do about the fact that Griffin has a problem with him.

Laura has something to ask Lulu.

Kevin asks Dante for his help.

Maxie tells Felicia that she’s not sure she can do this.

Michael informs Nelle that he won’t let her live off of him.

Griffin can’t believe Ava wants him to play nice with his father’s killer.

Drew Proposes to Sam While Jason...

Lulu Pitches the Voting Scandal to...