Drew Proposes to Sam While Jason Looks for the Flash Drive 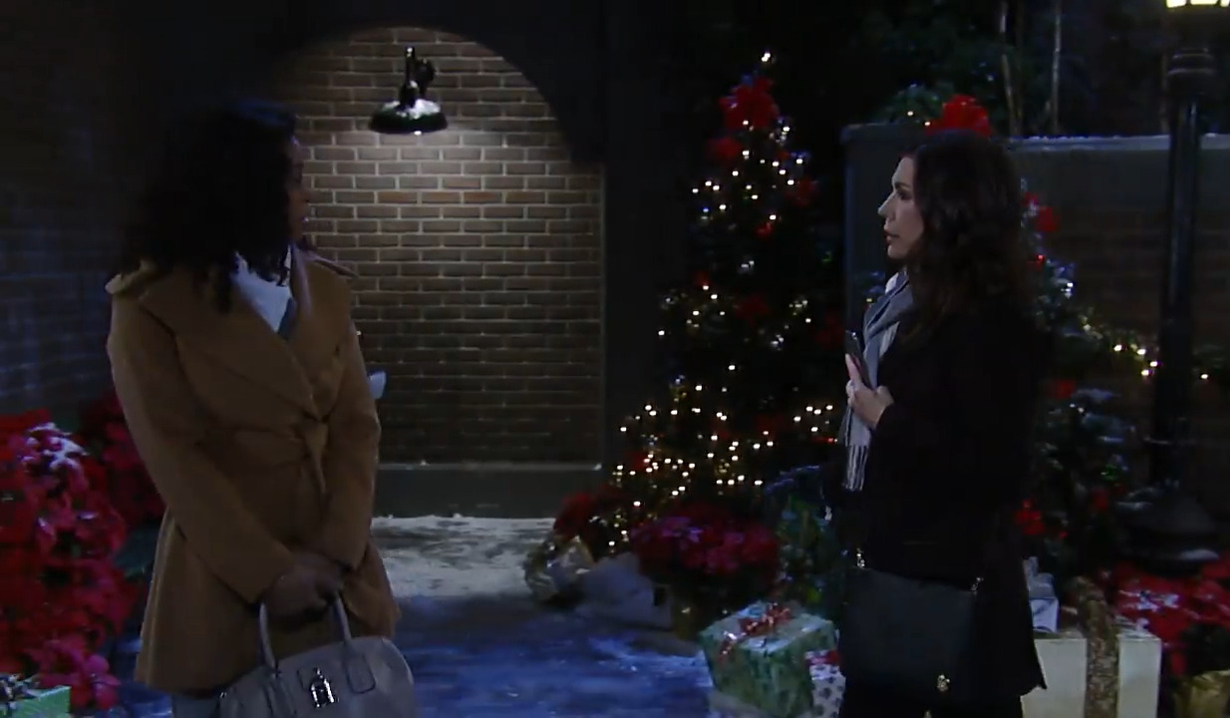 Anna bumps into Jordan at the Toys for Tots drive in the park. Jordan tells her that Andre’s been sent to Pentonville. The cop beats herself up for never having a clue about Andre. Anna tries to be reassuring.

At the hospital, Franco admits to Liz that he knew the truth about Drew before everyone else. He explains everything that happened with Andre and that he sat on the proof because of Jason’s possible influence over her. Franco admits to being a coward, but he doesn’t want Jason anywhere near Jake, telling him the horrible things he did in the past. She asks him to clear up any other secrets he has. He imagines telling her that Betsy told him he tried to kill Drew when he was three. In his imagination, Liz threatens to tell Jason and runs off. Franco decides not to tell this to Liz. The nurse agrees to believe him and loves him more than she’s ever loved anyone. She can’t wait to marry him. In his office, Drew assures Sam that, even if their marriage isn’t legal, he still meant his vows. He repeats them and asks her to marry him under his own name. She sobs and says their vows were real. He wants it to be legal and starts talking about the awkwardness with Oscar. She’s sure it will just take time to figure things out. Oscar interrupts and Sam takes off. Drew assures him that he’s interested in getting to know him but doesn’t want to pressure him. They discuss Scout and how great she is. Oscar would like to know about what his mom used to be like, but Drew can’t remember. Jason is at the Metro Court. He calls Robin to get her mom’s contact info. He calls Anna and then joins Carly and Sonny at the bar. Sam comes in to pay the bill for the launch party. She and Carly step aside and Sam explains Drew just proposed. She hasn’t made up her mind, but insists Jason is in the past. Carly says he doesn’t have to be and is sure that Drew must know she still has feelings for Jason. It isn’t clear how anyone can win in this situation. The blonde thinks that Sam should be showing Jason some more sympathy. “He’s a big boy. He can handle it,” Sam says. She’ll always love Jason but she’s in love with Drew. Her friend advises her to be with the one who ‘gets’ her. Meanwhile, Jason and Sonny discuss Brick digging for who is behind what happened. Anna joins them and Jason explains that Andre left a flash drive in the Christmas ornament he gave her. She leaves to get it. Jason assumes that Drew can remember more than he thinks he can. Carly and Sam return. Sam shares an awkward stare with Jason and walks away.

Sam goes back to the Aurora office and assures Drew that she loves him and will marry him. He’s not sure they can get married right now. It wouldn’t be fair to her. He needs to know who he is and so does she. He feels like they are forever, but he asks her to wait.

Back in the Metro Court, Carly and Sonny discuss Sam and the two brothers. She wishes Sam would realize that Jason is her soulmate. Sonny explains that, considering what Faison did, there still must be a threat.

More: GH Blog on how Naughty Nelle needs to go

Anna jogs back to the park to look for the ornaments she donated. After she searches, she calls Jason and tells him they have a problem. When he arrives, she explains that the ornament and flash drive are gone. Maxie joins Lulu at Kelly’s. Her friend announces that they are doing a food drive. As Lulu pours loads of sugar in her coffee, she explains the importance of food drives in the era of food deserts. She asks Maxie to spread the news to her followers.

Drew hears what he needs to hear.

Obrecht Warns Britt Not to Cross...