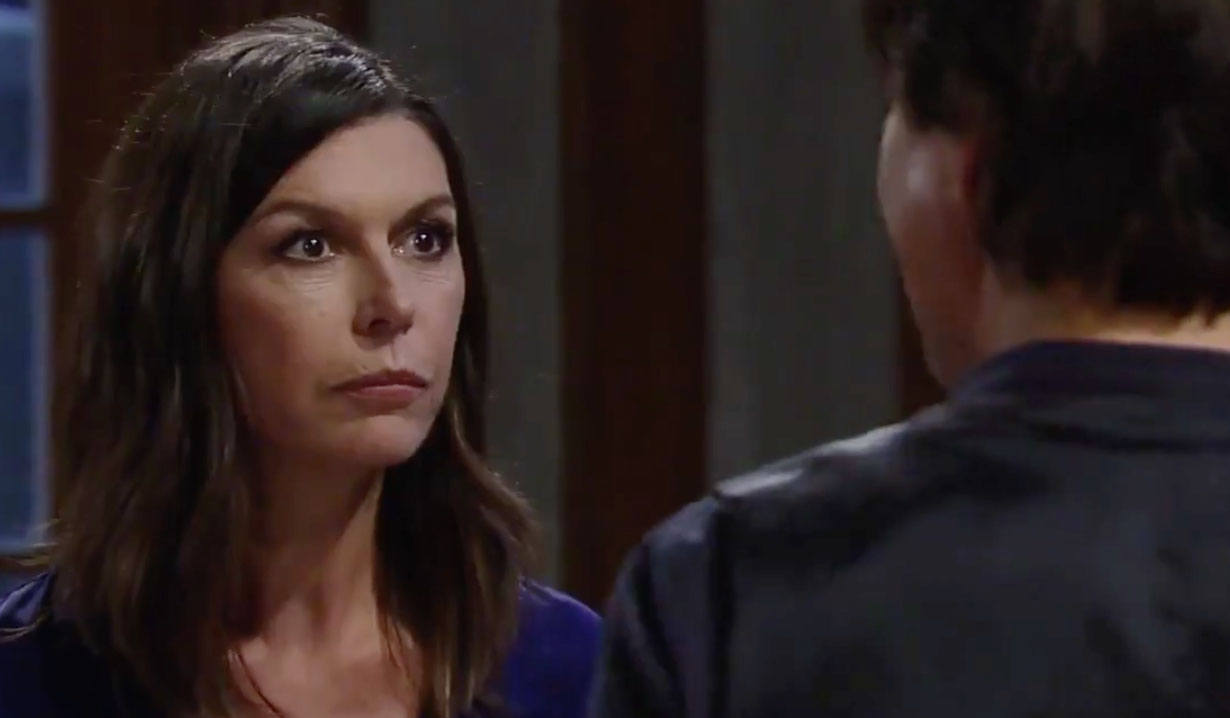 After some heated banter at Anna’s, Finn pulls her into a passionate kiss. Finn pulls away and calls her arrogant. Anna responds he’s still miserable and then kisses him again. They’re interrupted by a call from Robin. When Anna gets off the phone, Finn asks if she wants to talk about the kiss. She absolutely does not and gets busy wrapping presents for Toys for Tots. Anna finds mistletoe in one of the boxes. Finn takes it and leans in close, but puts it back in the box for the community tree. Finn puts his coat on and tells Anna not to wait up for him. They longingly look at each other before he leaves. At the hospital, Liz worries to Franco about Jake. She notes she would normally go to Andre for help and doubts herself for ever trusting him. They kiss as Kiki walks up and congratulates them on their engagement. Liz exits to run some errands and Kiki asks Franco if everything is okay. Franco admits that he didn’t trust Elizabeth with something big. Kiki thinks he’s paying a price for staying silent, but Franco can’t face her disappointment. Kiki thinks Liz’s love is a gift and it’s time he return the favor. Julian causes a commotion as he’s brought to the PCPD. Scott enters as Julian rants that no progress is being made on his case. Jordan interrupts his ravings to tell him the judge has said he’s free to go. Julian thanks Scotty for his help, but tells him he needs time before he can pay him. They talk about the other project they’re working on, as Jordan warns Julian to walk the straight and narrow. On the docks, Jason refuses to take Sam’s wedding ring back. He also tells her Faison is the reason for the whole mess and he wants to know why it happened and if there’s a threat. To do that he will need Drew’s help. Jason is hopeful Andre can give Drew his memories back. Sam says it wouldn’t matter because she’s married to Drew and they have a life and family together. They can’t get the past five years back and she can’t keep Lila’s ring either. She begs him to take it. He thinks she should keep it and give it to their son when he finds a woman he loves. Drew rushes into his office to find Alexis. Since Diane is fiercely loyal to Jason, he asks if he can count on her help with his legal issues. Alexis assures him she’s on his side because he’s good to her daughter and grandkids. However, she says he and Sam aren’t legally married. After going through all his legal documents, Drew notes his entire existence is invalid. He also tells Alexis about Oscar. A stunned Alexis says they will discuss it later, but encourages him to talk to Sam about their marriage. Alexis steps to the hallway and takes a call from David, confirming their plans. Sam arrives and tells Drew about seeing Jason. After they talk about Lila’s ring, Drew says they aren’t married anyway. He wants to say the vows with his legal name and asks her to marry him.

After signing Scott’s legal documents at Charlie’s Pub, Julian sees Alexis walk in. She panics because she’s meeting David there and doesn’t want to get sucked into his drama. She asks Julian to leave, but he won’t because he owns the place. He just bought it. Elizabeth visits Andre at the station. She lashes out at him for how everything he’s done is affecting Jake. Andre thinks Jake is in a good place and will find his way through this, especially with her guidance. She thinks Franco will help too and tells the disgraced doc they are engaged. Andre congratulates her and wishes them both happiness. Later, Jordan enters as Andre is led out of the room in cuffs. Jason runs in asking to talk to Andre. Jordan wishes Andre luck and walks off. Jason asks if Drew’s memories can be restored. Andre says it’s never been done, but there’s a baseline of both Jason and Drew’s memories. He says he gave it to the one person he trusts in this town, but she doesn’t even know what it is. The scene cuts to Anna packing up some Christmas ornaments.

Liz returns to Franco at the hospital, who has something to tell her.

Lulu asks Maxie for a favor.

Sam Finally Opens up to Jason, While...

Drew Proposes to Sam While Jason...