Sam Finally Opens up to Jason, While Drew Tries to Connect With Oscar

Thursday December 14, 2017: Drew bonds with Oscar, Monica makes assumptions about Kim, Sam and Jason have a heart to heart, and Lulu makes a discovery. 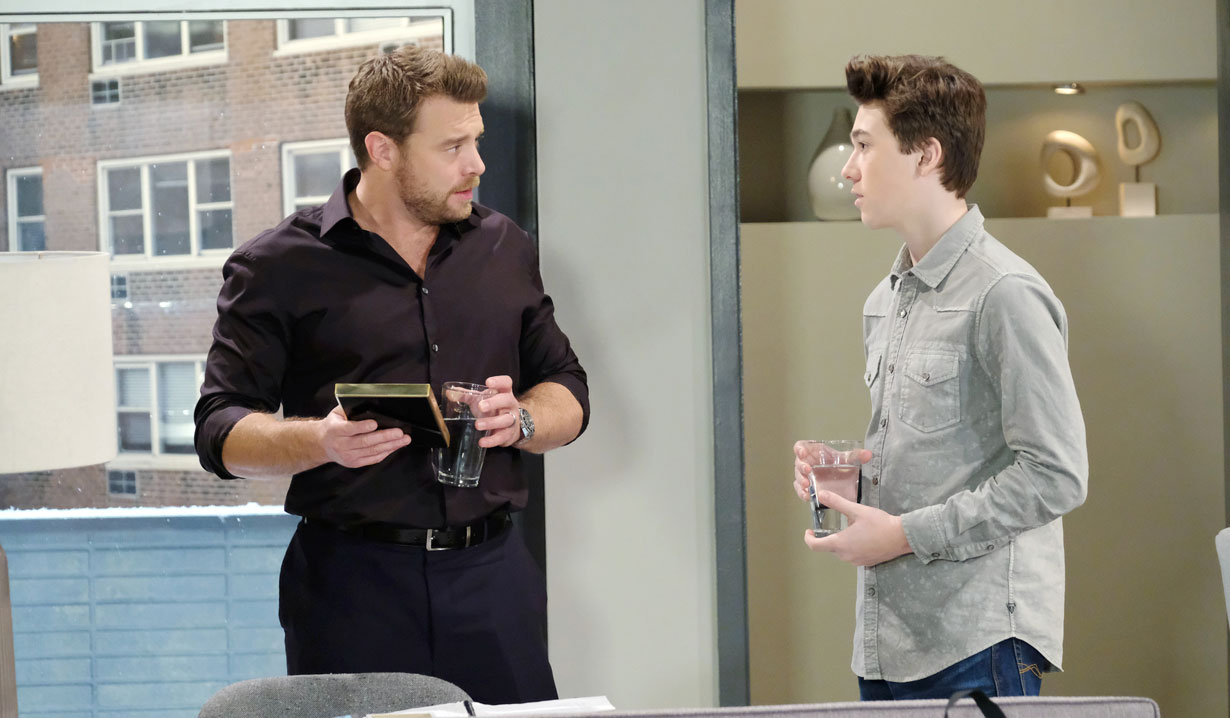 At Anna’s, the spy pleads with Finn to bow out of his investigation of Cassandra, and to turn her offer down. Valentin meets Cassandra at the Metro Court restaurant. She tells him that Finn is going to produce their new product. Valentin asks to talk to Claudette, which Cassandra offers to arrange, when he’s earned the right. Valentin storms off, and Cassandra receives a call from Finn, who agrees to work with her. Meanwhile, Laura and Kevin are lunching. She mentions that Lulu has been asking about their wedding date. Kevin suggests a Christmas wedding. At Wyndemere, Lulu drops by to pick up Charlotte’s Christmas list. Nina leaves to look for it, and Lulu rummages through Charlotte’s crafting supplies and finds another ballot for Felicia in the 2014 mayoral race. She wonders why this is here. Nina walks in wondering the same thing, and dumps a bag of ballots onto the table. Lulu suspects election tampering and decides to take the ballots to investigate, which Nina refuses to allow. Lulu wonders if Nina is worried Valentin helped Lomax steal the election. Nina reminds her Valentin wasn’t living here, but Nicholas was. Nina warns Lulu that her investigation might reveal things about Nicholas she won’t like. Later, Valentin returns, and Nina asks him if he tampered in the 2014 election. He has no idea what she’s talking about. They kiss, and she smells Cassandra’s perfume on him. Valentin promises she will soon be out of their lives. At the Quartermaine mansion, Monica speaks with Kim about learning Oscar is her grandson. Monica doubts it is a coincidence that Kim just recently relocated to the city where Oscar’s very wealthy family lives. Kim claims she only wanted Oscar to know about his roots, which she traced to Port Charles through an Ancestry DNA service. Kim swears she wants none of her fortune, or her family drama. Monica apologizes for coming on too strong, and Kim accepts. Monica would like to know about Drew, because she and Alan didn’t get to raise him. Kim only knew him for three months, but knows he grew up in an orphanage. She says he loved the brotherhood and comradery of the Navy Seals. Monica feels Drew has a real brother and family now, and so does Oscar. Monica asks her to tell Oscar that he is always welcomed here. Drew drops by Oscar’s place to discuss what they both have recently learned. Drew thinks if anyone knows how he’s feeling these days it’s probably Oscar seeing that his life just got turned upside down too. Oscar thinks he’s done pretty good without a father, and doesn’t want to complicate Drew’s life any further. Drew would like the chance to get to know him. Kim returns home, and asks what is going on. Drew explains they are just trying to get to know one another. Oscar leaves to do his homework, and Kim asks Drew what he did. Drew responds, “Nothing right.” Drew leaves, and Kim talks with Oscar about meeting Monica, and that she would like to meet him. Oscar insists he needs to get his homework done, and shuts down discussing Drew or Monica with her. On the pier, Jason asks Sam to talk to him. She admits she’s been so focused on Drew’s pain that she didn’t pay attention to what he’s lost. Sam doesn’t know what to do, because she loves Drew and married him. Sam switches the topic to his meeting with Sonny. Jason fills her in on the lead they got on Faison, and what Britt told them. Jason is only alive because some traitor double-crossed Faison and didn’t kill him as they were instructed. Sam cries as she details looking for him in the water after he was shot, and only finding the phoenix figurine. She blames herself for not listening to her gut, which told her that he was still alive. She thought Drew was him, but even though he isn’t, she doesn’t regret loving him. Jason tells her about the manuscript they found at Faison’s place, and that Spinelli is analyzing it. Jason brings up that Spinelli feels guilty for marrying her and Drew. Sam suddenly realizes her wedding ring to Drew is actually the one Jason gave her. Back at Anna’s, she is furious with Finn, but quickly realizes he’s having fun playing spy. The two argue, and Anna accuses Finn of wanting her. Finn laughs at the suggestion, but pulls her into a kiss.

Lulu meets with Kevin and Laura at the Metro Court, and they reveal they are planning a Christmas wedding. Lulu is thrilled, and reveals her own news that she has discovered something big, but she doesn’t know if she should report it.

Lulu asks Franco if everything is okay.

Andre tells Liz there is something she needs to know about Franco.

Julian asks Jordan why she had him dragged down here.

Alexis informs Drew that he and Sam aren’t legally married.