Tuesday December 12, 2017: Carly tells Bobbie about Nelle's pregnancy, Nelle hits Nina where it hurts, Sonny informs Anna about Faison, and Lulu gets a lead on a new story. 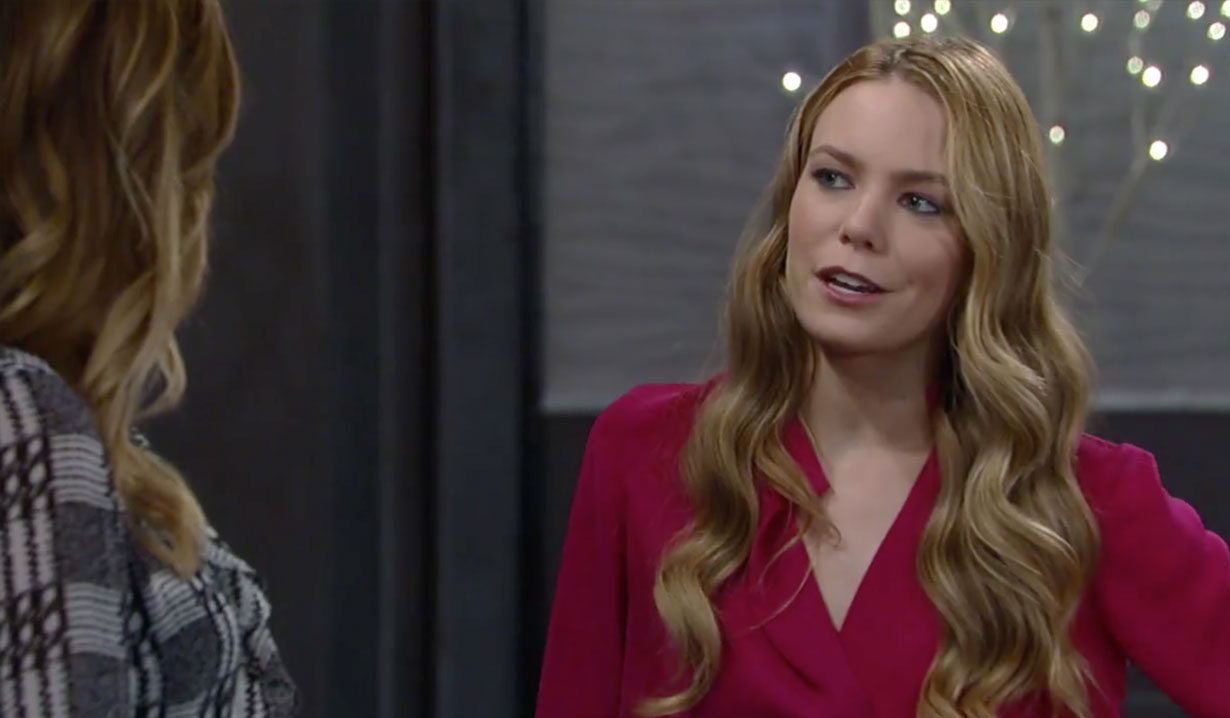 Bobbie drops by the Corinthos place and learns from Carly that Nelle is pregnant. Carly asks Bobbie to alter the paternity test Nelle that has agreed to take, but her mom refuses because it will just blow up in her face. Carly worries this is karma biting her in the ass. Bobbie reminds Carly that she forgave her for her schemes, and she is her daughter, but Nelle is a scheming and conniving snake. She also points out the baby is not at fault and is a gift. Carly thinks she should focus on Michael’s baby. At the Metro Court, Sonny meets with Anna to warn her that Faison has been in Port Charles. He shows her the burnt manuscript found at his place after he ran off. Anna recognizes the author as Faison’s penname. Sonny tells her that Britt claims he didn’t write this, that it just appeared and it frightened him. She flips through it and finds the ending is unfinished. Anna can’t help him because it’s too close to her, so he plans to put Spinelli on it. Meanwhile, Nina and Charlotte walk-through on the way to see Santa, and Charlotte runs over when she spots Nelle having breakfast. Nina sends Charlotte off, and blasts Nelle for selling her brother out to the tabloids. Nelle brings up the subject of nannies and daycare to Nina because she is looking into one for her upcoming bundle of joy with Michael. Nina says, “Poor Michael,” to which Nelle quickly jabs back that Nina will never experience this joy because she can’t have kids. Nina retorts that getting pregnant doesn’t make one a mother, and she hopes she learns that for her baby’s sake. Finn meets with Cassandra up in her room, where she offers to fund his research. He can’t accept without thinking it over. She understands, and he will be in touch soon. Finn thanks her and leaves. She makes a call to someone and believes she’s found the man who will help speed up the development of their new product. He heads down to the restaurant and meets with Anna, who is alone, to discuss his meeting with Cassandra. She realizes nothing she says will stop him, so she won’t stand in the way of whatever he’s planning. Later, Nelle makes it a point to get Sonny’s attention as he’s leaving and tells him the news that she and Michael are expecting a baby. Carly arrives just in time to intervene. Up at his door, Finn discovers his keycard no longer works. He heads back to the restaurant, snags Carly away from Sonny, and asks about his room key not working. She reminds him he checked out, and she had all his things moved. He’s confused, until he looks over at Anna smirking at him. Michael stops by the PCPD to talk to Dante and gives him the news that Nelle is pregnant. Dante suggests he talk with Sonny about his situation, because he of all people will understand given he has a child with Ava. In the interrogation room, Britt is thrilled to see Nathan. They hug, and Nathan is proud of her for turning herself in. Nathan promises to do what he can to help her get out, because he definitely needs help, and reveals he and Maxie are expecting. She reminds him she’s an OBGYN, and asks what he needs to know. He needs help with their family medical history since their mom hasn’t been forthcoming. Britt is sure since he turned out okay, so will his baby. Later, Britt is taken to lockup, and Nathan calls his mom. Lulu has breakfast with Laura at Kelly’s and they discuss odds and ends, including Laura becoming interested in stopping the development of Charles Street. Lulu notices the time and has to go meet Nina at the park because they are taking Charlotte to see Santa.

In the park, Charlotte and Nina meet up with Lulu to see Santa. As Charlotte visits Santa, Nina informs Lulu about Nelle’s pregnancy bombshell. When Charlotte returns, Lulu notices she has an odd piece of paper, which she realizes is an election ballot. She asks where she found it, and Charlotte says she got it at Wyndemere and was reusing it to save trees.

Michael arrives at the Metro Court to find his parents arguing with Nelle. Nelle suggests they sit down and talk about this new blessing. Meanwhile, Anna hands Finn a key and tells him they are now roommates because she had him moved in to watch over him and keep him alive, since he won’t give up trying to stop Cassandra.

Kim deals with Oscar’s reaction to the truth.

Nelle warns Michael he will regret it if he doesn’t make her life easier.

Sonny warns Carly if they take action then everything will change.

Britt Explains What Faison did and...