Britt Explains What Faison did and Andre Confesses to Anna

Monday December 11, 2017: Kim tells Drew what happened between them, Carly and Michael refuse to believe Nelle, and Jason finds a clue. 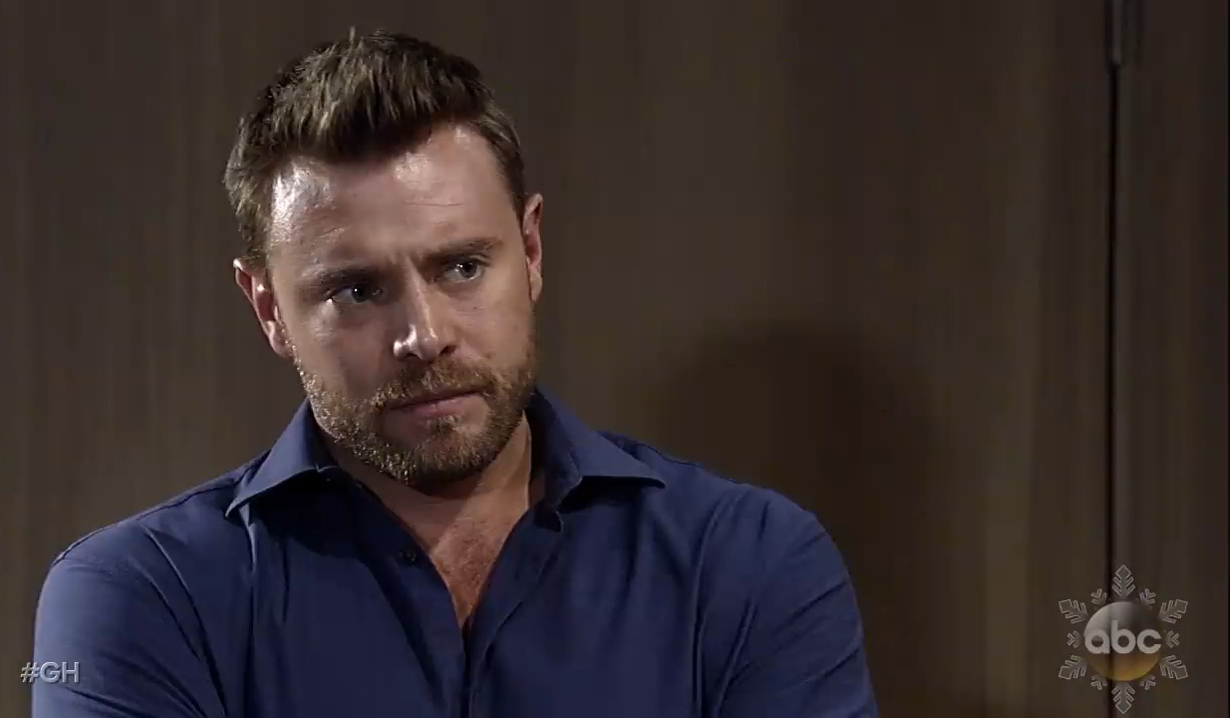 At the penthouse, Sam eavesdrops as Kim tells Drew that Oscar is his son. Sam interrupts and the other woman tells them about her brief relationship with Drew. She’s sorry that she never told him, but she had a lot to deal with and didn’t want to drop it on him. When she eventually tried to find him, the Navy told him he’d deserted. She offers to let him into their son’s life but doesn’t expect anything from him. Kim wants to tell Oscar the truth first. After she leaves, Sam gives him a hug. He doesn’t know how to make things up to his son and worries about her having to deal with this. She promises to support whatever he does. In an apartment, Britt tells Sonny and Jason that she’s sorry for what Faison did, but Jason should count his blessings and move on. That’s not what they want to hear. She explains that she and Faison toured around Europe, looking for who double-crossed him. The men wonder if the traitor is dead. She explains that her father was on the phone all night and agitated. In the morning, he was gone. Jason digs around in the fireplace and finds a charred manuscript: “The Severed Branch” by P.K. Sinclair, Faison’s old penname. Britt says the manuscript just showed up and upset her father. She asks about Rocco. Sonny tells her she can’t have any contact with him or Spencer. When he says he will tip off the cops about her, she offers to turn herself in. The men wonder who could give them some answers. Jason thinks that if Andre could take away Drew’s memory, maybe he can give it back.

Anna visits Andre in the interrogation room. He’s surprised to see her, but she wants to be a friend. She’s sure someone must have forced him to do what he did. “My wife,” he explains, telling her about their relationship. They eloped but were separated by his work in the WSB. Jordan eavesdrops as Andre explains that his wife had early onset Alzheimer’s. That’s why he created the memory mapping system. However, she was too far gone before he could use it. In tears, he says he was just trying to help. Anna offers to talk to the authorities. He warns that someone powerful is behind all of this. After she leaves, Jordan enters and confronts him about being married. He says his wife’s family made him dissolve it years ago, so they could be her primary caregivers. She’s hurt that he never told her the truth. He’s sorry and hopes she finds some peace. At the hospital, Nelle congratulates Carly. She’s going to be a grandma. Carly refuses to believe Nelle is pregnant with Michael’s child. Nelle accuses her of projecting and reminds her of her history of lying and promiscuity. Carly accuses her of trying to cash in. Michael makes it clear the he won’t believe Nelle until she proves it. He and his mom want a paternity test. Nelle doesn’t look happy about it. She makes it clear she doesn’t want his money and walks away. Carly repeats to her son that Nelle is lying. He’s not so sure. In his office, Finn tells Cassandra that her health is fine. She senses something is wrong with him, so he complains about the hospital board. He tells her how addictive his drug can be and how worried this has his backers. He’d like to get paid. Now that he’s finished being her doctor, she asks him out on a date. She thinks they can help each other. As he walks her to the elevators, Anna eavesdrops around the corner as Cassandra tells him she may have a job for him at her company. As soon as she’s gone, Anna leaps out and demands to know what he’s doing. She lectures him and threatens to arrest him. She won’t actually do this. He walks off. “Two can play at this game,” she grumbles.

Oscar and Joss are in the park. He asks her to check her phone for the results of the paternity test. They get confirmation that Drew is his father. Even thought this was expected, he’s shocked. She points out that he’s a Quartermaine now and he has a half-sister. He doesn’t know how to process all this. Kim shows up and Joss takes off.

Cassandra has an offer for Finn.

Charlotte is happy to see Nelle.

Nelle Gleefully Tells as Many People...