Michael Cuts Ties With Nelle, so She Claims She’s Pregnant 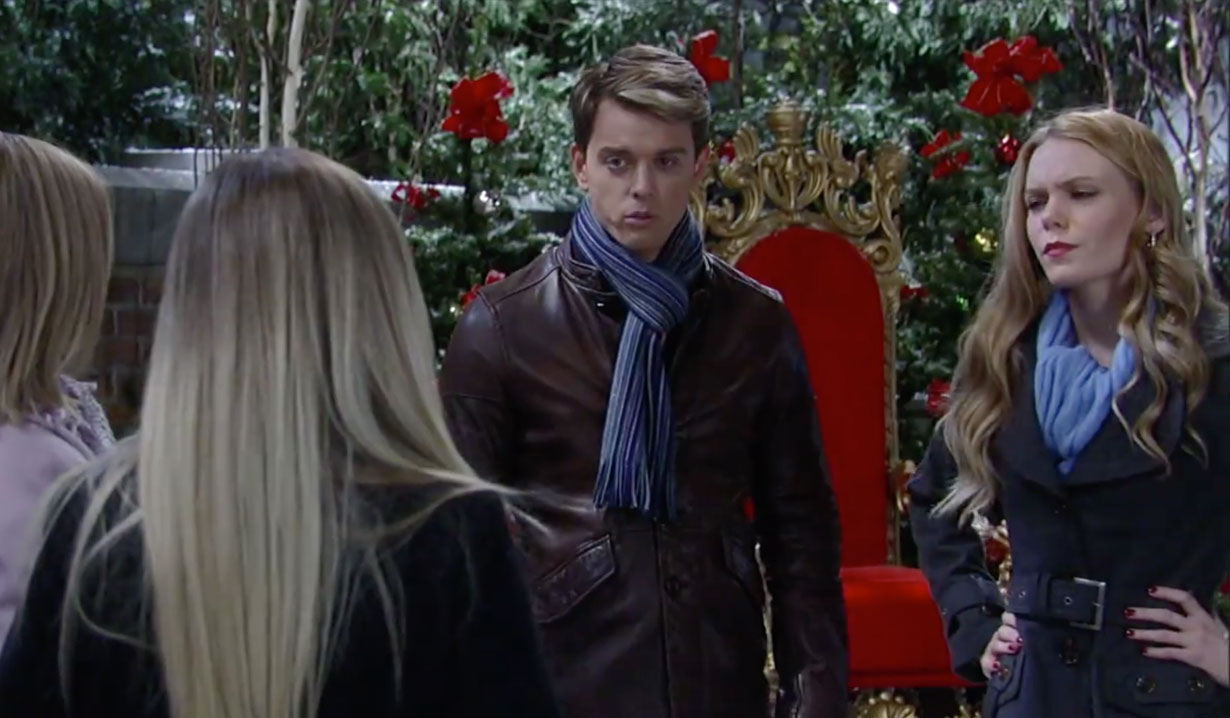 Michael helps Nelle clean up the park after photos with Santa are finished for the day. Maxie and Lulu appear and accuse Nelle of ratting out Nathan and Amy to the tabloids. She denies it, so they show her and Michael the photo they took of the check stub from the Intruder with her name on it. Nelle finally admits did it because she needed the money, and tries to explain to Michael that the public had a right to know the truth. Michael feels she always has an excuse, and always plays the victim. Nelle cries she was in debt and Nina fired her thanks to Maxie, but Maxie says it is something Nelle did involving Nina’s husband that got her fired. Michael informs Nelle she takes advantage of people, she is broken, and he can’t be around her. Maxie and Lulu leave Michael and Nelle to have it out. Michael cuts all ties with Nelle and tells her she’s on her own. He sends a message to his broker to sell her apartment, and suggests to her maybe it’s time for her to leave town and start over. She cries she can’t because she’s pregnant with his child.

Franco surprises Liz in his art therapy room, which he’s decorated with romantic paintings, flowers and candles. He pulls out a ring, gets down on one knee, and proposes to her. She says yes, and they kiss. Franco slips the ring on her finger, and she tells him how happy she is. Franco wants to talk about Jason, but they are interrupted by Kim, who mistakes the room for the lounge. Liz offers to show her to the lounge seeing her break is over, and tells Franco they’ll talk later. Liz and Kim grab coffee, and Kim brings up Monica’s two sons, and that she briefly knew Drew years ago. Liz admits she almost married Drew, and explains the whole story to her. Franco listens in as they talk, and overhears Kim how she feels about Drew now that he isn’t Jason Morgan. Franco quickly scoops in to speak with Liz, so Kim leaves them. Franco suggests to Liz they elope so they can spend Christmas as husband and wife.

More: GH up for a Writers Guild award Drew paces his cell when Andre is ushered into the cell across from him. Andre apologizes to him, but Drew is furious that Andre sat back and watched him live a lie for years. In the station, Sam thanks Alexis for what she’s doing to help Drew, but thinks they need a new tactic. At Sonny’s, Jason and Sonny wait to hear from Spinelli, who is tracing a burner phone that Obrecht recently bought. Jason gets a call from Sam, who asks for his help. He takes off, and later Joss returns home, followed by Oscar. Oscar asks if she heard anything on the DNA test. She tells him the results aren’t in yet. Sonny appears and offers Oscar some Thanksgiving leftovers, and Joss goes to check on Avery. Sonny overheard the conversation and asks Oscar why he’s interested in Drew. Joss returns and learns they’re talking about Drew. Sonny gets a message and has to run. After he leaves, Joss gets a text alert, confirms to Oscar that the results are in. Jason arrives at the station, and Sam asks him to help Drew. He agrees to do what he can. Alexis returns with the Navy’s officer, who recognizes Jason as Andrew’s twin. Jason sits down with the man and explains everything that happened to him and Drew over the past few years, including Andre’s involvement. He also suggests Faison is the real culprit, who had his brother abducted in order to weaponize the both of them. The Navy officer agrees to contact Washington with this information and see how they want to proceed. Later, Sam thanks Jason, who vows to always help her. He then leaves to meet Sonny. In their cells, Andre explains to Drew his procedure was meant to help people with Alzheimer’s disease and Dementia, but Drew thinks that doesn’t help him. Andre doesn’t know much about his former life, but suggests exploring who he really is may help him. Drew doubts that, but Andre points out he may have friends, a family, a woman he loved, people who are desperate to find him. Drew asks if his memories will ever return, or if Andre has them stored somewhere. Before Andre can answer, a cop arrives to take him to speak with his lawyer.

Sonny and Jason burst into an apartment with guns drawn.

Joss asks Oscar if he doesn’t want to know if Drew is his father.

Kim talks to Carly about Drew, and tells her about his arrest.

Sam confronts Franco and accuses him of worrying that Jason will tell Jake the truth about him.

Liz and Drew break the news to Jake about his father.

A woman tells Jason she doesn’t know, but he doesn’t believe her.

Maxie and Lulu Get the Goods on...