Tuesday December 5, 2017: Ned suggests they buy out Drew and Jason at ELQ, Kim visits Drew and Sam, Nathan asks a favor of Obrecht, and Lulu seeks out a new line of employment. 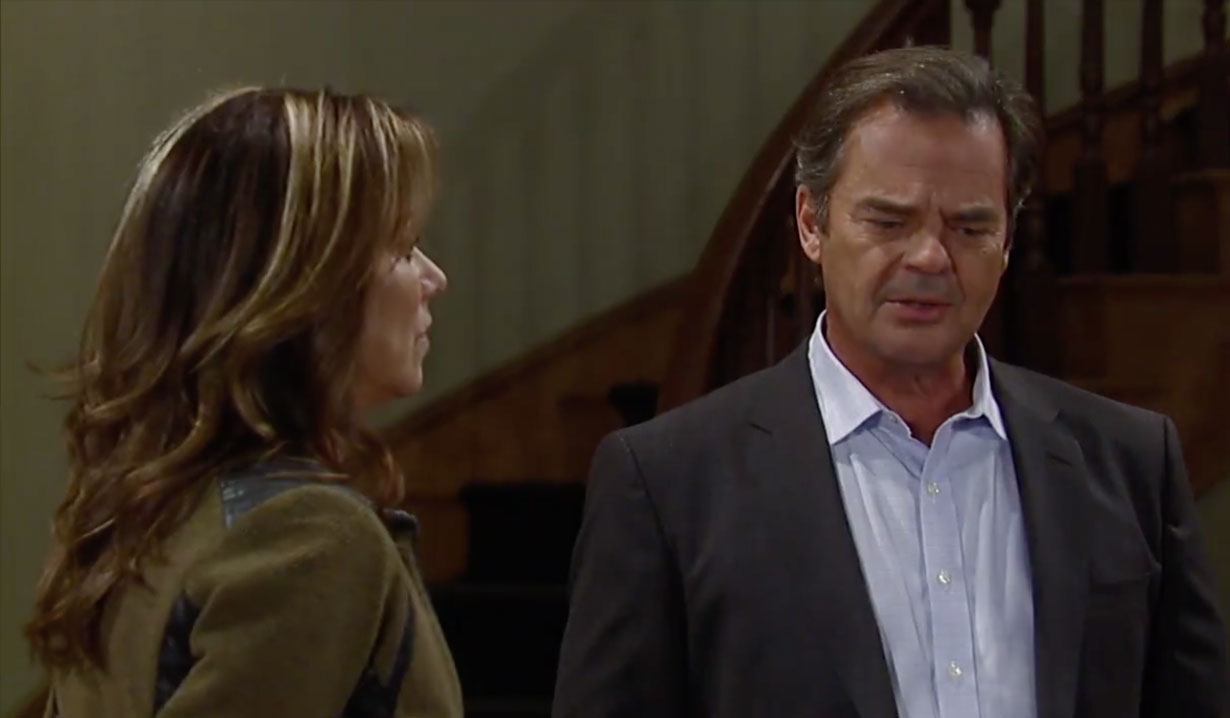 Olivia decorates a tree in the Quartermaine living room when Monica walks in and is shocked by her taste in white trees and colorful ornaments. The two argue about Quartermaine traditions, and Olivia wishes Monica would treat her as a member of the family. In the foyer, Alexis, Ned and Michael discuss Edward’s will and the fact that Drew Cain now owns shares of ELQ. Ned suggests they buy both Drew and Jason out of ELQ. Michael feels it goes against grandfather’s will, and reminds him that Jason meant too much to grandfather. Ned says they can at least buy out Drew. Monica walks in on them and refuses to allow Andrew to be denied his birthright. Monica reminds him that it was Drew who restored ELQ to them from the Cassadines. Olivia sides with Monica, because loyalty to family is important. Ned agrees, and admits his impulse to protect ELQ goes too far sometimes. Monica jokes it is in his DNA as Tracy’s son. Later, Monica and Olivia get a moment alone, and Olivia admits her tree is tacky and got carried away. Monica lets her know she should have been more open to seeing things her way, and she appreciates her sticking up for Drew. She tells Olivia to think of this as her house too. The two hug.

More: One bombshell after another on GH this December At the hospital, Amy walks Kim to meet her first patient. Nathan and Maxie sit in the exam room, and Amy can’t believe that Maxie is pregnant. Maxie asks her to keep this to herself because they don’t want to tell too many people during the first trimester. Amy comments that unlike some people she knows how to keep a secret, which Maxie takes offense too. Nathan tries to cool the ladies down, and sees Amy out. He promises her that Maxie didn’t sell out Ask Man Landers to the tabloids. Kim calls Nathan back in, and he and Maxie listen to their baby’s heartbeat. After the appointment, Kim overhears Nathan and Maxie that the man they thought was Jason is actually Andrew Cain. Lulu meets Peter August at the Metro Court and discusses how he can help her pursue one of her first loves, journalism. Peter isn’t blown away by her recent stories on school cafeteria food, but offers to find her a position with his paper if she can bring him a story that knocks his socks off. Later, Lulu meets Maxie and Nathan. Maxie asks how her meeting with Peter went. As they talk, Nathan notices Obrecht at the bar and decides to go talk to her. Nathan fills her in on their first checkup, and that he needs to compile their family medical history for the baby’s records, including information on his father. When he suggests talking to Alexis and Valentin about the Cassadine medical history, she assures him it isn’t necessary because she compiled those when he was born. Nathan walks off, and Obrecht makes a frantic call asking for someone’s help. Meanwhile, Maxie rants to Lulu about how Amy thinks she sold them out to the Invader, which gives Lulu the idea to find out who sold them out as the story to give Peter. Maxie insists on helping her since this story affected her husband and Crimson. In the Aurora offices, Sam finds Drew at work. Drew notices the name plate with Jason’s name on it and trashes it, since he needs to start living his new life. He thinks about all the memories he has, none of which are his, except the ones from the last three years. Sam tells him the last three years happened, and so did Scout and their family. She promises him that she loves him, Drew, the man who took a bullet for her and gave her a beautiful daughter. Sam believes they both helped each other to be reborn. Kim arrives to see them and asks to talk about her son Oscar. Drew thinks he’s a good kid and asks her not to be too hard on him for sneaking over to see them. Sam remembers that Carly told them that she used to know Drew, and hopes she can tell them about him. She claims she can’t help because she only knew him a short time before he was deployed. Suddenly a man in a military uniform bursts in. He identifies himself as Chief Lock, (played by Robert S. Martin III), and that he needs Andrew to come with him as he’s under arrest for desertion.

Lulu and Maxie dress up in hazardous waste suits and head to the Invader’s office. Lulu is sure her plan will work.

Julian arrives at the Quartermaine mansion to see his son.

Maxie and Lulu snoop through the Invader’s office.

Nathan asks someone in jail, “What the hell were you thinking?”

Carly tells Sonny that nothing is settled.

Liz Proposes to Franco Just As...

Maxie and Lulu Get the Goods on...