Friday December 1, 2017: The truth about Jason Morgan comes out, Ava and Griffin reach a compromise and Alexis and David move forward. 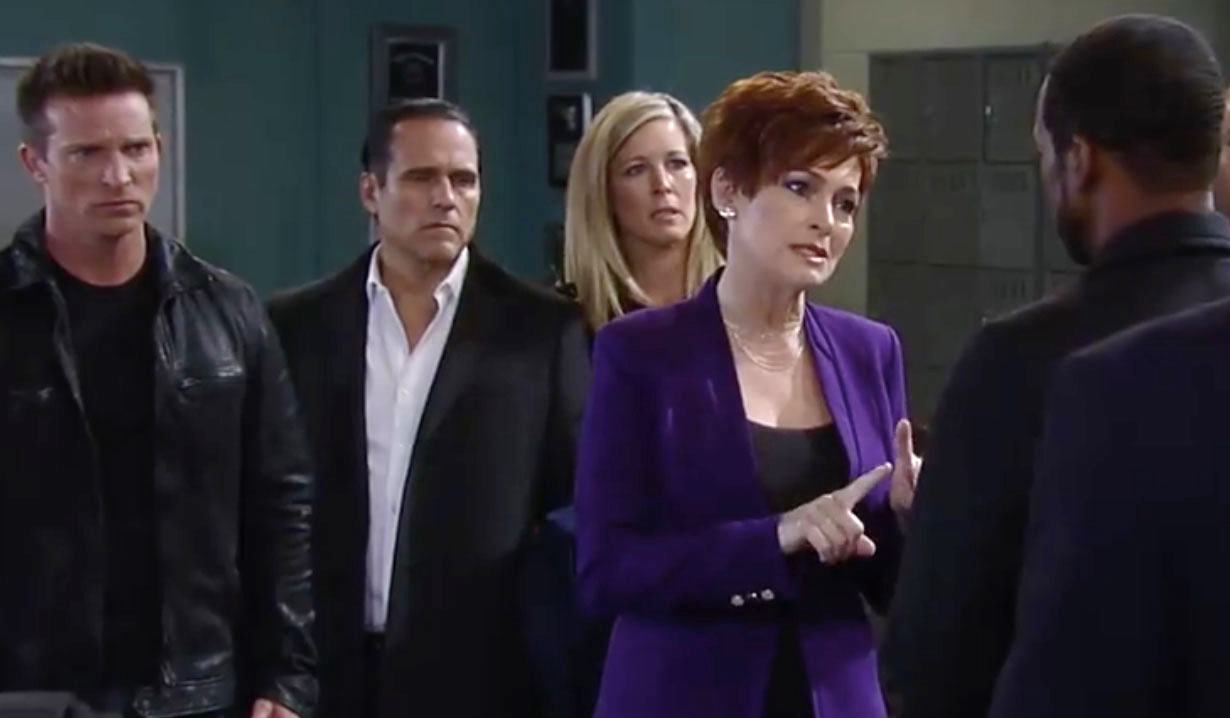 Julian drops in on Ava, who is thrilled to see her brother. She also lashes out at him for refusing her visits. He wanted her to move on with her life and notes she has, citing how good her face looks. He asks if he can stay with her, as Griffin comes to the door with flowers. Julian takes joy in needling the former priest for sleeping with his sister. Ava interrupts, explaining that Griffin saved her twice. They have a meaningful relationship and he needs to respect them. Julian apologizes and reaches his hand out to the doctor. An angry Griffin rebuffs his gesture. Julian takes his leave as Griffin demands to know why that murderer is out of prison. Ava reminds Griffin everything he taught her about forgiveness. He calls himself a hypocrite. He will never forgive Julian. Ava defends her brother, insisting he was just playing a part to please his father. That doesn’t bring back Griffin’s father though or make it easier for him to watch Julian go free. Griffin can’t be around it. Ava wonders if he’s asking her to choose between him and her brother. He respects her relationship with Julian, but wonders if she can be with him if he can’t be around Julian. Ava believes she can keep the two men separate. Griffin thinks it will be complicated, but she knows she can make it work as long as she doesn’t lose him. Griffin says he’s not going anywhere and they kiss. Alexis runs into Dr. David Bensch at the hospital. She’s still embarrassed about what happened at Thanksgiving. He laughs it off, but he doesn’t want to pursue her if she’s on the rebound. She explains her role in helping Julian get out of prison, but she has no intention of ever letting him in her life again. Julian pops up and says, “Hello, Alexis.” Alexis introduces the men and David leaves them alone. Julian assures her he’s just there for a doctor’s appointment. He wasn’t following her. David returns as Alexis reiterates she can’t be around him. Alexis tells David to call her to set up a date and leaves. Julian urges the doctor to be good to Alexis. David spits out that Alexis will tell him if she doesn’t like the way she’s being treated. Emotions run high at the PCPD as everyone circles around Andre. Diane questions the doctor, who explains his research. He recalls that he never spoke to either twin before the procedure, as they were already unconscious. However, he knew which man was Jason as he needed to “Xerox” his memories. In fact, Andre mapped memories from both men so he could place Jason’s over Drew’s. He didn’t know what happened to the men afterwards, until he was contacted in 2013 by his employer to monitor the situation in Port Charles. After some prodding, Andre turns to Jason and says he was sent there to monitor Andrew Kane, which is him. He turns to Six and tells him he is Jason Morgan. Sam’s husband won’t accept it, believing Sonny paid Andre off. Sonny insists it isn’t true. Diane asks for proof, but Andre doesn’t have any. Spinelli blurts out that he has proof that Sam’s husband is Andrew. He pulls out a photo of the twin who was a decorated navy seal. He went AWOL in 2012 with no apparent motive. He says the Navy has Andrew’s fingerprints on file so all Jordan has to do is perform a simple search to compare them to Sam’s current husband. She complies and they’re a match. The man now called Andrew points out the electronic files could have been altered. Curtis tries to get Andrew to believe the facts, adding that being in the military is a badge of honor and he should be proud. However, Andrew doesn’t remember anything about that life. He glares at Jason and says, “I only remember his.” After everyone has dispersed, Jason thanks Diane, Spinelli and the Corinthoses for believing in him. They want to celebrate, but Jason has to hang back for his paperwork. In the interrogation room, Sam tells her husband he is a hero, but he says he has no connection to Andrew Kane. Andrew grows upset, worried the life he built for his family will be taken away. He storms out to confront Jason. He says no matter what the DNA tests say, they are not brothers.

Franco and Liz head to the hospital. They worry about how Jake will process the new information. Liz believes Jason will wait for her to tell their son when the time is right. Franco notes she has a lot of faith in him. Liz says she does.

Sam tells Andrew they are in it together.

Spinelli Returns to Port Charles and...

Liz Proposes to Franco Just As...