Kim Nero Meets Sonny and Carly, and Is Stunned to See Patient Six

Wednesday November 22, 2017: Families gather for Thanksgiving, Maxie reveals a secret, and Kim is shocked by a familiar face. 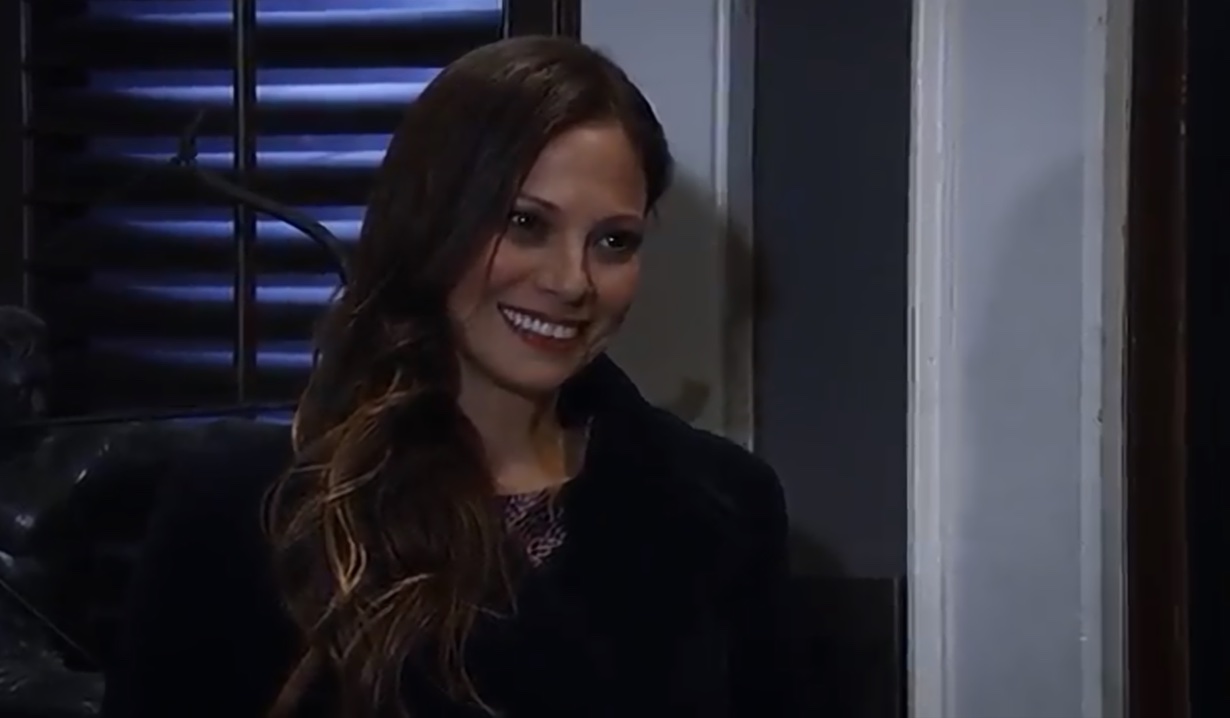 At the Corninthos compound, Sonny barbeques the turkey. Inside, Joss welcomes Oscar, whose mom had to run back home because she forgot her pie. Joss and Oscar discuss the guy he found online, who turned out to be gay and was never with a woman. Later, Oscar’s mom
Kim Nero, (played by Tamara Braun), arrives and meets Sonny, Carly and Joss. Joss and Oscar vanish to check on Avery, and Kim tells Sonny his house is very nice and obviously organized crime has been good to him. She knows exactly who they are, and is concerned about Oscar’s involvement with their daughter. However, she won’t try and come between the kids, because this is their first romance and they will likely break up eventually. Sonny wouldn’t bet against the kids just yet. Alexis welcomes TJ, Jordan, Curtis and Aunt Stella to her place, where Dr. Bensch is doing all the cooking. Everyone mingles over drinks and appetizers, and Stella brings up that crazy Liv Jerome appearing on TV this afternoon and clearing her brother. Everyone becomes quiet, and Stella had no idea that Alexis was married to Julian. Molly asks what this means. Jordan says that Julian can make an appeal to try and be released, but she doubts it will happen. Olivia and Ned join Lulu, Dante, Nathan and Maxie at Lulu’s place for dinner. Ned and Dante talk about how Monica is headed to Mexico, leaving the Quartermaine house empty for Thanksgiving. Meanwhile, Lulu questions Maxie if she is pregnant, but Maxie can’t tell her before she tells Nathan. Lulu thinks that must mean she’s pregnant. Laura and Kevin arrive, and Lulu announces the food is ready. Everyone gathers around the table and everyone gives thanks for what they are grateful for. Monica returns home after her plane was grounded and finds Jason looking at family photos in the living room. He ask if they are still good, given everyone is telling him his life belongs to someone else. Monica assures him that his relationships with everyone are real, but Jason says they now only extend to the past three years. He feels his friends don’t need him anymore now that they have this other guy, and he worries soon his family will feel the same way. Monica states she is his family, not Sonny and Carly, and family doesn’t cut and run. Jason asks, “What if I’m not your family?” Monica doesn’t care who he is because they have formed a relationship, which Jason worries means he’s not really him. He is grateful to have her as his mother, and she cries that he is her son. They hug, and Jason leaves. At Sam’s, Six offers Sam to let that guy go on using his name so he and Sam can go on with their lives. Sam asks, “What would happen to you?” He would leave on his motorcycle, but Sam points out that wouldn’t be fair to Carly and Sonny, who have spent five years missing him. Six believes things will only get worse, but Sam tells him to let them because the only way for all of them to move forward is to know which man is Jason and which is Andrew. Six decides to get going to Carly and Sonny’s, but Danny walks in before Six leaves. Danny remembers him and the two talk for a bit. Six heads out, and Danny tells his mom that he likes her friend. Sam tells him that he is someone special.

Jason arrives at Alexis’ place and asks where Sam is. She eventually appears with Danny, and he asks what kept her. As Alexis brings the turkey out, she trips and the bird goes flying across the room. Later after everyone has left, Bensch helps Alexis cleans up, and she apologizes for ruining everything. She can’t believe he isn’t running from her by now, and she pulls him into a kiss.

Back at Lulu’s, Ned calls Monica when he learns she is home, and asks her to come over because they have plenty of food. She swears she’s fine with a turkey burger, and tells him to enjoy his day. As the food is dished out, Maxie begins to feel nauseous due to the smells, falls over onto the table, and sends the food crashing to the floor. She runs to the bathroom. Later, Nathan tends to Maxie, who is in bed. Maxie reveals she is pregnant. He’s thrilled.

Back at Sonny’s, Carly asks Kim about Oscar’s dad. She explains he hasn’t been in the picture for a while, and it is complicated. Jason walks in, and Kim freaks when she sees him and calls him Drew.

Monica sits alone with her turkey burger in the living room, when Ned, Jason and the others arrive carrying pizza and singing the Thanksgiving song.

“General Hospital” won’t be seen tomorrow and returns on Monday, November 27 with a new episode.

Nora Reads a Statement from Olivia...