Tuesday November 21, 2017: Jason visits Liz on Thanksgiving, Robin has a heart to heart with Six, Alexis questions Sam about Six, and Nora makes a big announcement. 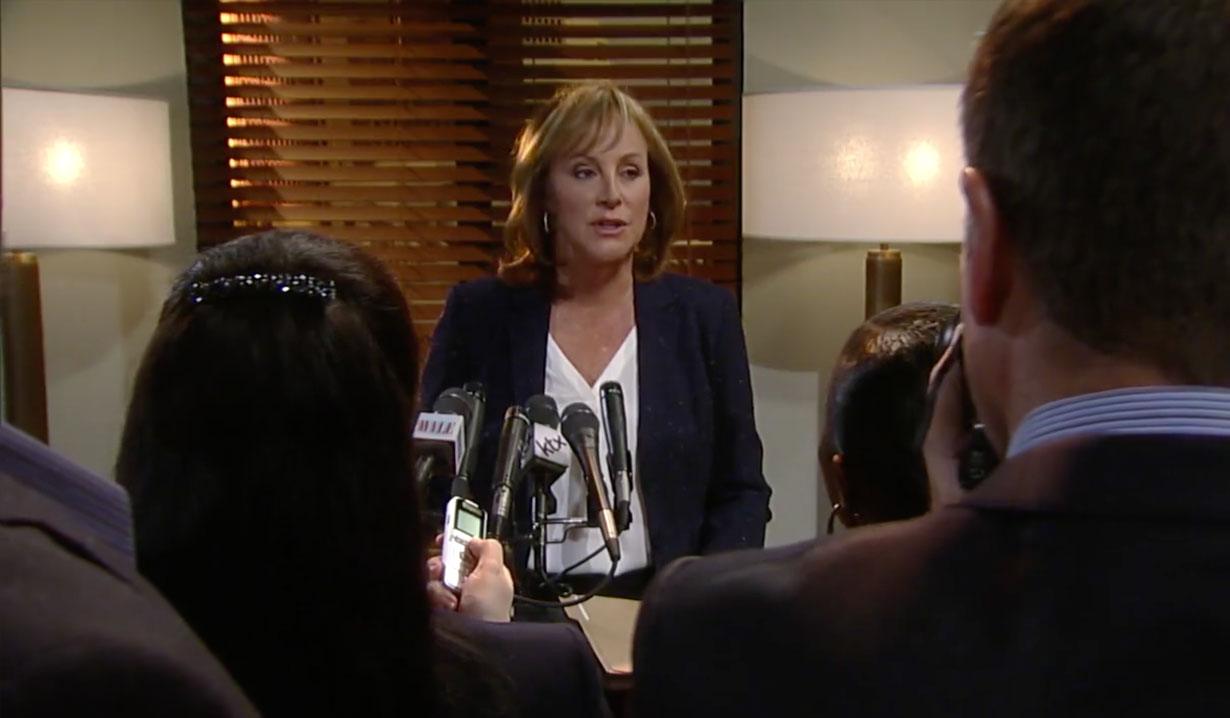 At Liz’s place, Franco gives the boys, himself and Liz some pilgrim hats and suggests they say what they are thankful for while they wait for the turkey. Franco is thankful for all of them, as is Liz. Aiden is thankful for his Grandma Audrey, who helps him with his cursive. Cameron is thankful he got to meet his Aunt Hayden. Jake says he’s thankful that his mom and dad are getting along better. Robin drops by Sonny’s where Six is. Sonny and Carly invite Robin to stay for dinner, but she has plans with Anna. Carly and Sonny give Six and Robin a second alone. Robin knows he’s missing Sam and Danny, but he doesn’t blame Sam for moving on. She points out Sam didn’t really move on because she thought she was married to him. She thinks Sam likely just needs time and space to figure things out. Robin leaves, and Michael and Six talk about Morgan.

Alexis drops by Sam’s place where Jason reveals something big is going down regarding Olivia Jerome and has to run out and cover it for the media company. After he leaves, Alexis asks Sam if anything has happened with Patient Six. Sam hasn’t seen him, but doesn’t know what she’s supposed to do if he turns out to be Jason. She feels like she would betray her husband if she even believed that to be true. Sam suggests they watch the news conference and turns on the TV. They watch Nora speak at the courthouse. At the art gallery, Ava emails a doctor she found on the web to try and convince them to perform surgery on her face. Griffin drops by with turkey sandwiches and warm apple cider and refuses to let her spend the holiday working. Ava gets a text from Kiki with a link to a live feed of Nora’s press conference, so she and Griffin tune in. Jason swings by Liz’s place. Liz sends the boys off to play, and Franco leaves Liz to talk with Jason. Liz knows he’s hurting, but tells him soon they will have the answers he is looking for. Later, Robin drops by to see Liz, not knowing Jason is there. Robin apologizes to him for thinking he was Jason. Jason realizes she believes the other guy. Liz leaves them to talk. Jason can’t believe she of all people can’t see the truth. Robin believes Helena messed with his mind to convince him that he’s Jason. She tells him he is a Quartermaine, he is Scout’s father, and everyone who cares about him still cares about him. Jason needs them to believe him. Robin leaves, and Franco returns to give Jason some advice. Liz eavesdrops as Franco tells Jason to screw what everyone else thinks and not give up his identity without a fight. Jason informs Franco that his opinion is the only one he doesn’t give a damn about. Jason leaves, and Liz tells Franco it was a nice try. She wonders why he would try to reach out to Jason. Franco says it is because he is important to her and Jake. They kiss.

At the courthouse, Nora reads a statement from Olivia about her brother’s arrest. In it Olivia explains she experienced a mental breakdown after Duke’s death, and now being of sound mind must clear her conscience. Nora reads on that Julian was not responsible for the crimes he committed and only did so because Olivia was threatening him and his loved ones. Back at Sonny’s, Sonny and Carly watch Nora’s speech to the press, and wonder who is really behind this attempt to get Julian out of jail. Michael and Six talk on the patio about Nelle and all the stuff that happened between her and Carly, and his failed relationship with her. Later everyone discovers Six is missing. At Sam’s, Sam asks her mom what this means for Julian. Alexis thinks this could get him a new trial. Alexis suggests they put this aside for Thanksgiving. Sam realizes her mom doesn’t seem shocked by all this. Alexis admits she will be relieved if Julian gets out of prison, but if he does she promises to try and move on to the next chapter of her life. Sam hopes so. Alexis leaves, and Sam gets a visit from Six.

At the gallery, Griffin is paged and tells Ava he wants a raincheck on dinner with her and will call her tomorrow. She says she has a big project she’s working on the next few days. After Griffin leaves, Ave gets a call from the doctor she emailed and sets up an appointment with him.

Dr. Bensch joins Alexis and her family for Thanksgiving.

Jason asks Monica if they are still good.

Sonny and Carly welcome Oscar’s mom into their home.

Six asks Sam what she wants him to do.

Michael and Six are Reunited for...