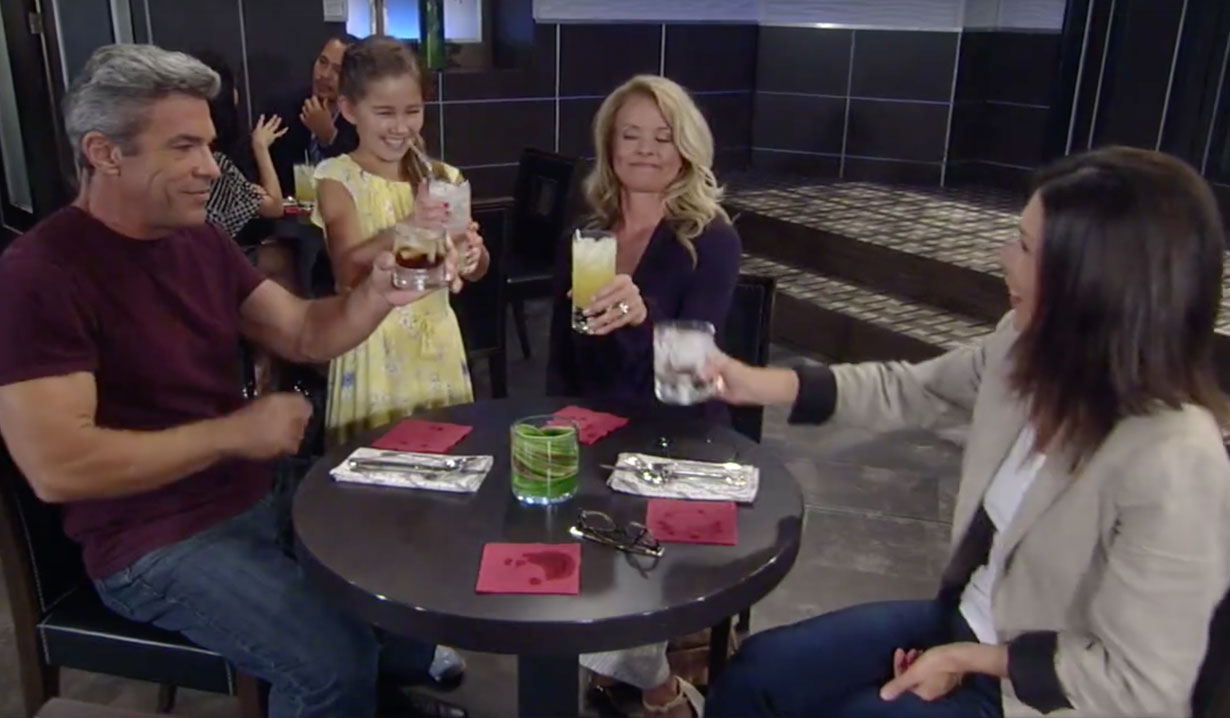 Mac and Felecia arrive at the Metro Court, arguing about whether to tell Anna about nearly being busted for indecent exposure. Felicia thinks they should come clean. Anna and Emma join them. They look at pictures of Patrick and Robin’s new baby and then toast to him. After they eat, Felicia has to leave. Emma leaves to take a call. Mac hands Anna a flashdrive that documents everything Valentin has done while she was away. They see that he’s been visiting the Jeromes’ building and wonder why. Mac encourages her to find something better to do than chase after the Cassadine. Emma returns and tells them about her complicated love life. She shows them the jewelry Spencer gave her. Anna thinks it contains a real diamond.

In Portland, Georgie eats grass while Maxie yells at her. Spinelli rushes over to speak up in the name of grass eating. He wonders if she’ll stick around. They discuss his beard and then he encourages her to suggest Nathan get a job with the local police. She doubts he would leave Nina alone and wonders what else is holding him back. Spinelli suggests that Nathan could be jealous of their bond. Maxie assumes there is something else. She asks him to expose Man Landers. Spin is reluctant. He follows that blog. Maxie thinks that outing him in the magazine could land her a promotion. After that, Nathan won’t be able to resist moving to support her career. When Spinelli explains that Man Landers has millions of followers, Maxie decides to discover his identity and blackmail him into working for her.

More: Interview: Ryan Paevey on playing a villain, and his GH role

Amy meets Nathan at Kelly’s to tell him he’s her hero and her brother is slowly recovering. She thinks the cop must be missing being Man Landers. He can’t handle living a double life and mentions his in-laws committing acts of public indecency. As they debate keeping his identity a secret from Maxie, Felicia interrupts. Amy makes an excuse and escapes. Felecia sits down and asks the cop what he was up to. She thanks him for protecting she and Mac from the police. After he walks out, Amy returns and thanks him again for his help. When she throws her arms around him, Felicia spots them through the window.

At the hospital, Franco stops Liz from rushing off to confront Obrecht for chasing Hayden away. He insists on doing it himself and walks over to Liesl. He asks about the rumor he heard that she ruined Hayden and Finn’s lives. Franco explains that Hayden has run away. That makes Dr. O happy. She hopes Finn learns the role she’s played in this. Liz comes over to lecture Obrecht, who battles back until Franco drags the nurse away. Meanwhile, Finn asks Curtis to track Hayden down for him. The PI refuses. He’s already tried looking and came up empty. He can’t hunt down a friend who doesn’t want to be found. The doctor begs. Curtis offers to give him a referral. Finn talks about how much he needs a second chance and leaves to find her on his own. In the hall, he runs into Obrecht. She begins taunting him until he realizes Hayden’s departure was her doing. Curtis joins them and Liesl continues her taunts. Finn wishes he’d left her to rot in jail. Seeing this is enough to make Curtis agree to help find Hayden, but he’ll leave it up to her if she wants to return or not.

More: All Korot is returning to GH

Franco and Liz head home and debate his involvement with Obrecht. They discuss his trip to New York. He hated being away from her and the boys. She says he’s free to roam if he comes back. Liz asks him to move in. He gets her to confirm that she really wants this. She asks him again. They have sex.

Kiki has some advice to give.

Nina has demands that need to be met.

Obrecht makes a mistake in her quest...

Kiki gives Franco some advice about...