Carly suspects Jason and Sam are keeping a secret

Tuesday August 15, 2017: Joss confesses the truth about the bullet to Carly while Oscar tells the police the truth, Ava and Griffin spend time together, and Parker's return stuns Alexis. 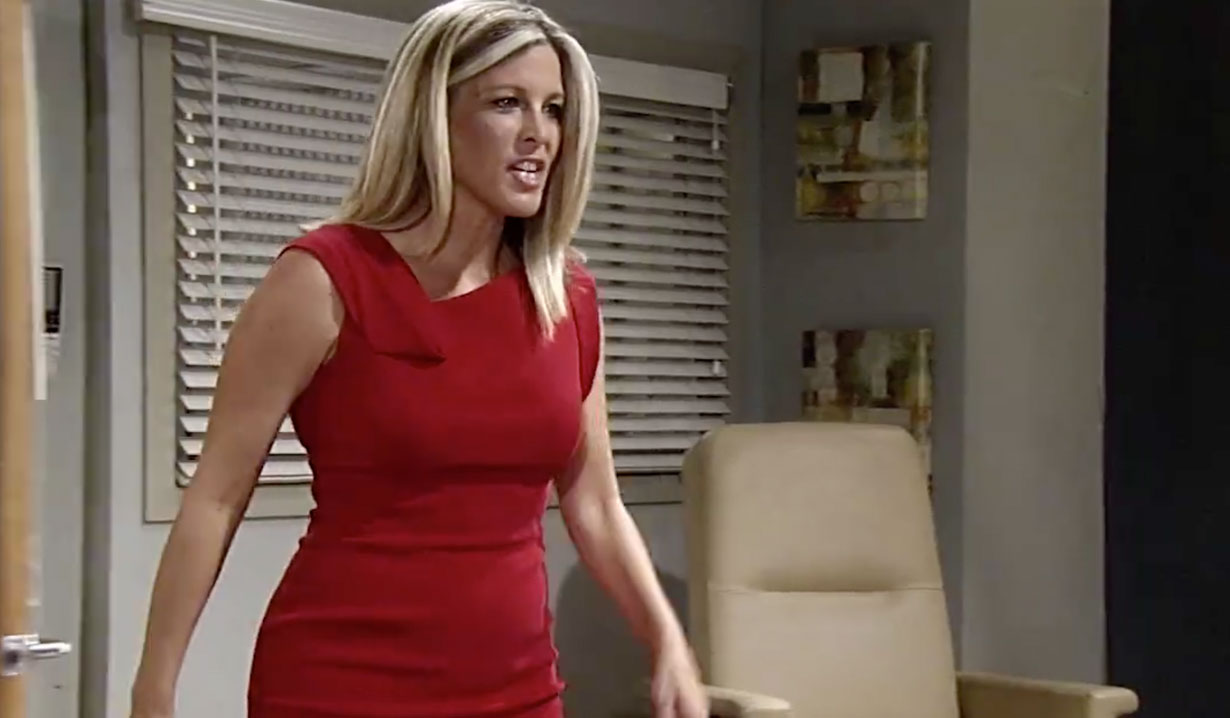 Alexis and Kristina have a picnic in the park. They discuss Kristina starting at Port Charles University, and how it will be a fresh start. Suddenly, Parker walks by. Parker says hello to Alexis and Kristina, and reveals she’s teaching at PCU this semester. Kristina knew because Molly is in her class. Alexis refuses to allow that to happen. After some bickering, Parker excuses herself, and Alexis claims she needs some lemonade because she’s parched and storms off. Alexis chases Parker down to grill her. Parker swears she had no idea that Kristina went to PCU, which Alexis doubts. Kristina finds them and shuts her mom down. Parker heads off, and Kristina is furious that her mother doesn’t trust her to handle her life. Alexis doesn’t trust Parker, but Kristina reminds her she was the one who made poor choices. Kristina is trying to right her wrongs, unlike her mother, but quickly apologizes for the remark. Alexis thinks she’s right, and decides to leave. Later, Kristina tracks down Parker and joins her for the concert. They exchange smiles. Elsewhere, Michael and Nelle enjoy a picnic, but are interrupted when the police call Nelle to the station to answer questions.

Griffin stops by Ava’s place to ask her to join him for a picnic in the park to watch the Port Charles symphony. He refuses to take no for an answer.

Joss meets Oscar on the bridge, and he invites her the concert in the park.

At Sonny’s, Dante informs his father that they got a lead on who sold the gun that shot him, and the feds are bringing him in. He suggests if Sonny knows something that he fess up. Sonny says nothing.

At the PCPD, Jason grabs one of the officers and name drops a mutual friend of theirs in order to have some accommodations made.

Carly storms into Sam’s room at GH and screams, “I know what you did to Sonny!” Sam quickly stirs awake from her nightmare to find Carly sitting by her bed. Before Sam can say anything, Jason wanders in, and suggests Sam needs her rest. Carly decides to take off. Sam confesses to Jason about her nightmare, and he reminds her they can’t tell Carly the truth until the case is closed. Jason gets a call and excuses himself.

Ava and Griffin select a spot in the park, and Ava keeps her face covered with a scarf and dark glasses. Suddenly Griffin grimaces in pain and thinks something stung him. Ava checks out the sting on his back, which is swelling up rapidly. Elsewhere, Oscar and Joss arrive and run into Michael and Nelle. Michael informs Joss that the cops wants to question Nelle about the bullet, so they can’t keep covering for her and Oscar. Oscar offers to come clean, so he and Nelle leave for the station together. Michael suggests Joss confess to their mom.

Carly returns to Sonny’s place and fills him in on her visit with Sam. She felt like Jason was trying to protect Sam from something. Sonny has something to tell her, but Michael and Joss arrive and interrupt. Joss confesses the truth to Carly about Oscar finding the casing while they were at the construction site, and that Nelle covered for her. Carly is grateful she and Oscar found it, but she is back to being grounded for lying to her. Carly orders her home, so Michael takes her. Carly recalls that Sonny had something to tell her, and he claims he has to reschedule his start date for his physical therapy.

At the PCPD, Nelle sits with Oscar as he tells Dante everything. Dante thanks him and goes to see the guy who sold the gun that shot Sonny. He wants to know who he sold it to, and the thug reveals it was a woman. Dante asks for a description, but the criminal’s lawyer arrives and refuses to allow him to answer any more questions. Dante leaves, and another officer informs him that the third gun has gone missing from the locker. He also tells Dante that Jason was hanging around earlier.

Ava and Griffin return to her place. He is in pain, but she tells him to calm down because Kiki has a similar allergy and she has a home remedy for bee stings. Griffin takes his shirt off, and Ava takes in his body. She gets to work applying the ointment, and he’s impressed by her treatment because the pain vanishes.

On the bridge, the cop from the station meets Jason and gives him Sam’s gun. He hopes he and Mr. Corinthos are square now. The cop leaves, and Jason wipes the gun clean and tosses it off the bridge.

Kristina asks Parker how it all worked out.

Jared rants to Obrecht that Hayden screwed him over.

Liz is delighted to see Franco, and they kiss.

Hayden disappears on her and Finn's...

Obrecht makes a mistake in her quest...