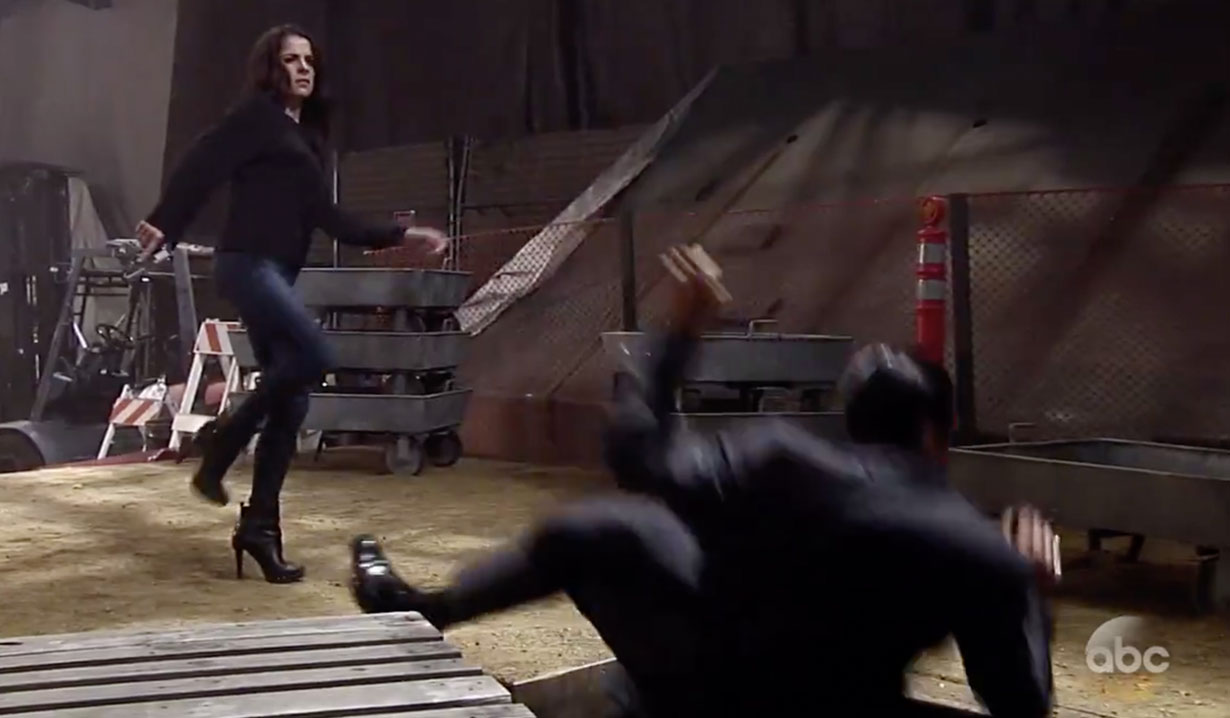 Maxie returns home and surprises Nathan at The Floating Rib. He asks if she is home for good, but she is only on a layover on her way to a fashion conference. She inquires about who he was talking to on the phone with so seriously when she surprised him. He says the call was nothing, which worries Maxie because Ask Man Landers says it’s never a good sign when a guy says, “it’s nothing.” He asks how she knows the columnist, and she explains her magazine was looking to sign him. Maxie calls him overrated, but Nathan defends his advice. Maxie laughs that Nathan has read the column. Nathan has something to tell her, but before he can, Felicia and Mac walk in and see their daughter. They rush her demanding to see the latest photos of Georgie and catch up, usurping Nathan and Maxie’s time together.

Laura arrives at the station and is shown Spencer’s glasses, which they recovered from the house Garvey had him in. Dante promises her they are combing the place for clues and will find him.

Nina runs into Anna outside of Kelly’s, and as they bicker about Valentin, he approaches beaten and bloody. Nina asks what happened, and he simply says he has been indisposed. Anna leaves them, and he explains Jason was questioning him about Spencer. Nina is furious, but he says it’s over and Jason believes he is innocent. Nina still thinks he needs to make a statement because he looks like he’s been in a fight, which could be used to revoke his bail. Around the corner, Anna calls Patrick is shocked by what he tells her.

Carly and Jason wait at Sonny’s for news, but can’t get ahold of him. Carly worries about Sonny, especially since he may have to pull favors and owe a lot of people debts in order to get Spencer back safely. She fears it will keep him from getting out of the business as planned. Jason reassures her that Sonny can do whatever he puts his mind to. Diane walks in and is furious because Sonny has named Max his interim successor until a more permanent one is found. At the construction site, Sam holds Sonny at gunpoint and orders him to drop his weapon. He does, and Sam states she has to take him out to protect her, Jason and the kids. Sonny is confused and swears he’s not after them. She calls him a liar and screams she won’t let him pull Jason back into his web. Sonny begs Sam to let him help her, because he knows she is going through something. Sam begins to waver, and he gets her to lower her weapon. Suddenly the gun goes off.

Back at The Floating Rib, Anna sees that Maxie is home and gives her a big hug. Anna reveals that Robin is in labor right now.

Nina and Valentina arrive at the PCPD, and Laura pounces on him demanding to know what he’s done with Spencer.

Jason returns home and finds the place empty. Sam returns looking disheveled, and Jason asks what is wrong. She mumbles that she had to protect him, and it’s over. Suddenly, Sam collapses.

At the Floating Rib, Mac, Felicia and Anna toast to Robin’s new baby and their family getting bigger.

Maxie dresses at her and Nathan’s apartment. She wishes she didn’t have to leave, but will be back in a few weeks. She suddenly remembers Nathan had something to tell her, but a horn from the car picking her up signals from outside. He assures her it’s nothing that can’t wait. Maxie heads out.

At the station, Spencer turns up, and Valentin wonders if he was rescued or turned himself in. Laura says he escaped. Nina asks Spencer to tell Dante that Valentin had nothing to do with his kidnapping. Spencer says nothing, but glares at Valentin. At Sonny’s, Carly and Diane chat about Sonny’s decision to leave the business. Diane tells her that he’s doing it for her because that is how much she means to him.

Back at the construction site, Sonny lays unconscious at the bottom of a hole.

Nina urges Spencer to tell everyone that Valentin had nothing to do with his kidnapping.

Finn tells Griffin he’s getting a second chance at happiness.

Obrecht meets with Hayden’s ex-husband. She thinks he may want to go see his former wife.

Sonny remains unconscious while Sam tells Jason that they are finally safe.

GH Recap: Sam is hospitalized as...