Monday July 17, 2017: Sonny and Carly renew their commitment, Ava is released against her will, and Curtis learns what Stella did for him. 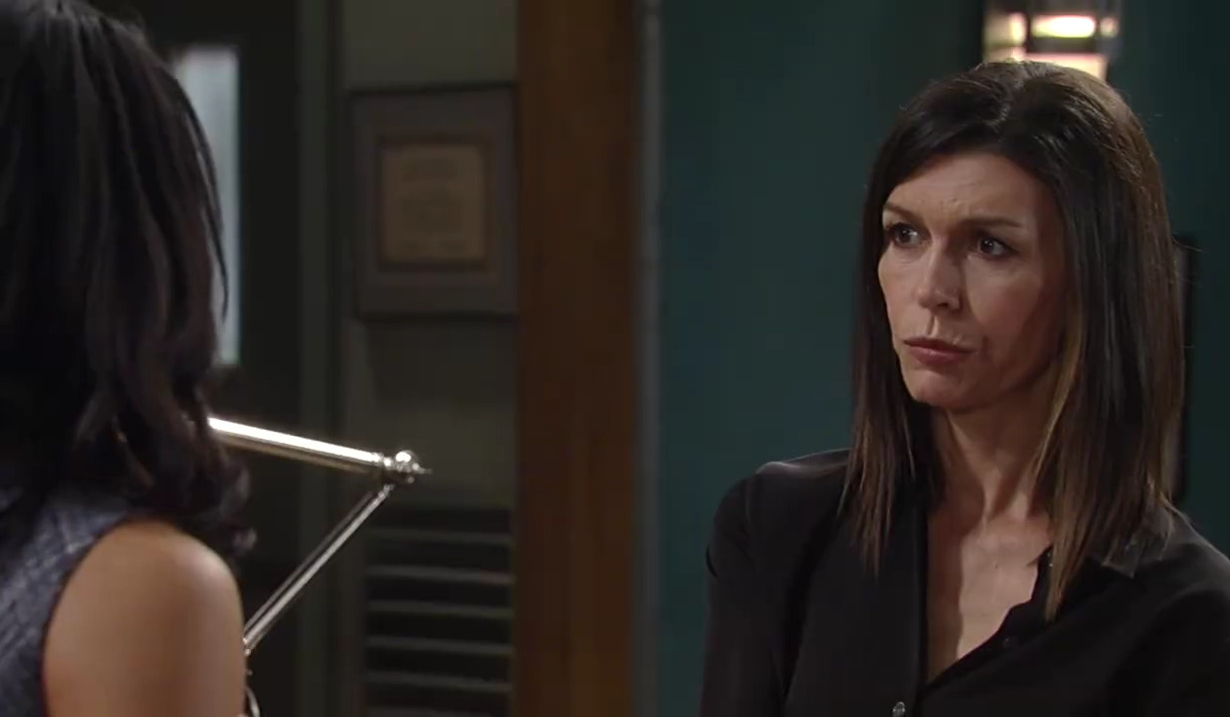 Anna’s surprised to see Andre at the PCPD. She tells him that Valentin is free again. Anna hopes he doesn’t go back to his old ways because she’ll have to take him down. As they talk about their dancing date, they agree not to be awkward about things. Jordan watches and then interrupts. He takes off. Jordan assures Anna that she has her blessing if she wants a relationship with Andre. She hopes that someone’s relationship works out. Jordan tells her about Stella’s stroke and how much the woman hates her. She’s afraid that she’ll drive her to death. Anna advises her not to look for reasons to avoid commitment. Jordan thinks she might be right. They hug.

More: Deconstructing GH: Returns with a heavy dash of foreshadowing At the hospital, Griffin finds Ava refusing to allow Felix to release her. Griffin sends Felix away and Ava tells the doctor she’s in no shape to leave. She wants to stay locked away where she can’t make children cry. He doesn’t think that her appearance can get in the way of her living a long and enjoyable life. “That’s easy for you to say,” she points out. When she’s left alone, she gets distraught. Andre shows up and offers to be her shrink. She doesn’t think he can be objective or helpful. Ava feels like she doesn’t belong in the world anymore. He leaves his business card. Meanwhile, Jason arrives at the hospital with Sam and promises to help her relax once they get her vitamins. Liz pops up and asks Sam about rescheduling her follow up tests. That piques Jason’s interest. Sam lectures the nurse for blurting out private medical information. They send Liz away and Jason demands to know why Sam has been lying. She insists she hasn’t lied. As he tries to get her an appointment, she has a vision of Sonny taunting her. Griffin pops up and says he wants to do some neuroscans on her. As Griffin talks, he turns into a vision of Sonny and he challenges her to eliminate him. In her room, Felix is regaling Stella with stories of Epiphany. He brings in some flowers TJ sent. Stella nearly cries. Curtis listens around the corner as Stella tells Felix about a man who used to send her peonies. Curtis interrupts to get the details but she waves it off. Felix leaves and Curtis admits he never thought of his aunt as a person with a life of her own. He gets her to talk about the man. She was engaged to him but it ended because of Curtis. His mom died and she needed to step up. She doesn’t regret it and offers to try to make peace with his being with Jordan. He leaves the room when Jordan calls and asks him to dinner. Carly arrives at the Corinthos compound and asks Sonny to put her wedding rings back on. He runs upstairs to get his out of a box of his precious objects. She asks him to promise to hold onto the good so they can give each other their best. They slip the rings on and make out. Then he ruins the mood by explaining the DA won’t charge Ava. Carly is furious and refuses to make peace with this. He doesn’t think revenge will solve things. The only way to beat Ava is forget her. Carly needs to visit Morgan’s grave.

Carly and Sonny visit Morgan’s grave and update him on the past few months. They sob as they say how much they miss him. Ava watches in the distance. Laura walks with Charlotte and Spencer in the park. Valentin eavesdrops from behind a tree as Spencer rants about theatre. He interrupts and Charlotte jumps into his arms. Laura sends the kids back to camp. Spencer sends a nasty look to Valentin before leaving. The Cassadine tells Laura that he’s petitioning to get full custody back. He makes it clear that his lawyers will cast doubt on the idea that Nikolas is even dead. Meanwhile, Spencer and Charlotte sit on a bench. He tells her that her papa killed his father. She refuses to believe it and runs off to her father, telling him what Spencer said. Spencer tries to make Valentin confess. He sends his daughter away and Laura sends away Spencer. Valentin is outraged that his daughter has been hurt and won’t let it happen again. Later, Spencer is rehearsing along when a man runs up and puts a hood on his head.

Laura has to face some harsh facts about Charlotte.

Curtis finds out what sacrifice is.