Friday July 14, 2017: Ava has a visitor, Nathan is a little too successful, and Valentin gets sued. 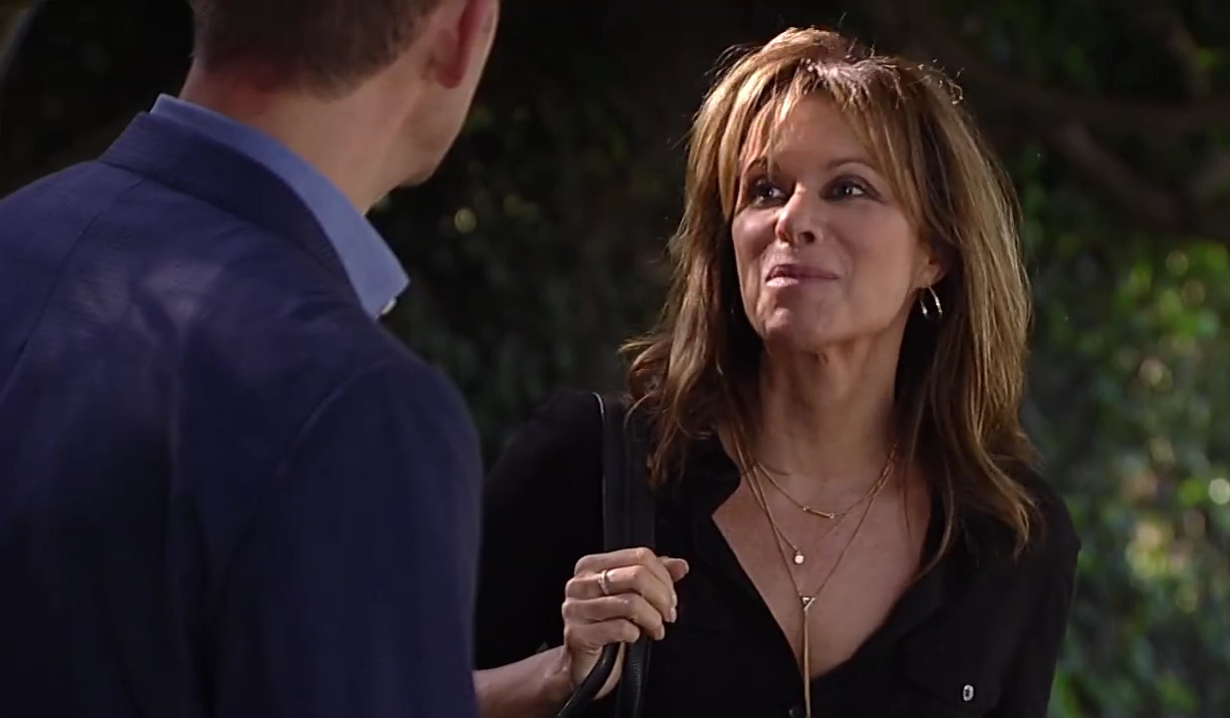 Alexis meets Valentin in the park. He has a picnic set up. This isn’t a friendly visit. He’s being sued for wrongful death. He points out there is no evidence he murdered Nikolas and this is pointless. She’s not suing him, Spencer is. He rips into her for this, suggesting that she’s traumatizing Spencer and exploiting him for money. Alexis thinks that Spencer and Ava will be able to convince a jury. He threatens to use the best lawyers in the country and tear Nikolas’ reputation to shreds. “You don’t know anything,” he tells her. She vows to get his money for Spencer. In a room at the Metro Court, Amy tutors Nathan on how to behave during his Man Landers interview. She assures him this will be over soon. He wears an ear piece and she hides on the balcony as the interview starts. Pretty soon, Nathan is not parroting Amy’s suggestions. He refuses to tell the interviewer about his own relationships. The cop covers this wrinkle and the calls start coming in. The first is about a long-distance relationship. Nathan follows Amy’s line about endurance and respect. When the next call comes in, Nathan takes over and talks about avoiding ruts and putting a woman’s needs first. Amy’s thrilled. When it’s all over, Nathan’s relieved. As he and Amy exit, she assures him this is finished and gives him a hug. Once she’s gone, the reporter returns and tells Nathan that Man Landers was a success and he’s now part of his podcast.

At Kelly’s, Laura lectures Spencer for threatening Valentin. He’s not thinking about violence anymore. He hired Alexis to sue Valentin in a civil suit. Laura gets a text about an old friend and sends Spencer home. Lucy is in Scott’s room when their daughter, Serena (played by Carly Schroeder), shows up. She runs in and embraces her parents. Lucy thought he deserved a good surprise today. They talk about her grandfather’s death. She shows them all of the selfies he was taking before he died. Serena cries as she details his last moments. Lee left him his fly-fishing kit. Scott regales them with a fishing story. He feels bad for not being there for Lee. Serena assures him that he was always in her grandfather’s heart. Scott recalls his troubled marriage to Laura. She arrives at the door and gives Scott a hug before spotting Serena. Scott wishes he’d told Lee how much he loved him. Laura’s sure he knew. The other women back this up and Laura leaves. The three of them make a toast to Lee.

In her hospital room, Ava is shocked when she looks in the mirror and is completely healed. Dante comes in and arrests her. She snaps out of it. It was a dream. Dante shows up in real life and pushes her for a confession. She assumes he has no case and is worried his father will kill her. Ava’s already asked him to do that but he wants her to live and suffer. After the cop is gone, Spencer shows up and tells her that his heart is with her, as was his father’s. Spencer once had burns too. She says he reminds her of Nikolas. The kid asks for her help in the civil suit. Ava would testify that Nikolas died a hero and her life probably would have taken a different direction if he hadn’t died. Spencer thanks her for making his father feel better and wishes her peace. He hugs her. Sonny bumps into Kiki and informs her that he has full custody over Avery now. He’s already told Ava and she accepted it. Kiki assumes her mother has given up on everything but she’s sure that Avery’s better off. He says she can see her whenever she wants. She leaves to do that as Dante arrives with bad news for his father. He can’t get the evidence they need. The DA is dropping the case. Sonny is not happy but his son says they need to let this go. Sonny’s not going to take the law into his own hands, but he will do something. He informs his son that he’s getting out of the business.

Kiki drops by the hospital to visit her mom. She has Avery with her. The kid looks away, frightened of her mother. That doesn’t make Ava feel good. Kiki sends the kid off with Pilar and Ava begs her not to bring the child back again.

Spencer meets Laura and Alexis in the park. She assures him that they will win the case. Across the park, Valentin vows to deal with Spencer himself.

Curtis feels bad about something.

Griffin has something to smile about.