Thursday July 13, 2017: Scott learns of the passing of his father, Sonny gives Joss good news, Carly fumes over her children's decisions, and Amy has another favor to ask of Nathan. 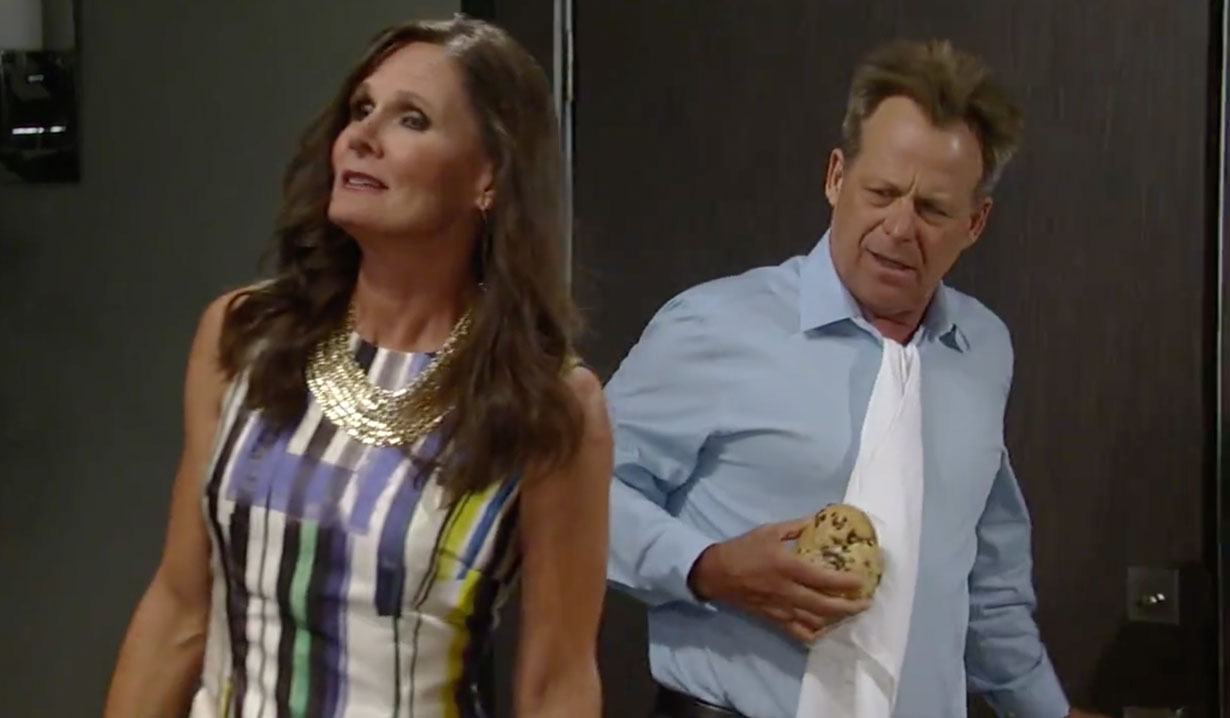 Scott enjoys breakfast in his room at the Metro Court when Lucy interrupts. She breaks the news that his father Lee has passed on. She explains it just happened while Serena was visiting Lee and Gail in Florida, and he went peacefully. Down in the restaurant, Michael and Nelle meet and share a kiss, but she suggests they not publicly rub this in Carly’s face in her workplace. Felicia hangs out with Nathan at the Floating Rib, and invites him to various events she and Mac are hosting. He wonders why it feels like she’s trying to book up all his free time. Felicia admits that Maxie suspects he’s keeping something from her. Suddenly, Nathan gets a call from Amy.

At GH, Bobbie informs Amy that if anyone needs her, she’s to let them know she took an early lunch. Bobbie meets up with Carly before leaving and tells her that she’s going to meet Felicia. She promises to make sure Michael never knows they were involved in exposing whatever else Nelle is hiding. In the park, Oscar starts recording video of Sonny on his phone and threatens to upload it and show the world what a perv he is for making a pass at Joss. Joss tells Oscar that Sonny is her step-father. Oscar tries to apologize, but Sonny tells him that what he did was the right thing. Sonny gets back to why he wanted to speak to Joss, and let’s her know that Jax’s issues with the State Department are resolved and he can return any time he wants. Joss is glad, but it still doesn’t absolve Sonny of what he did. Sonny refuses to stop trying to make it up to her. Sonny leaves them, and they get back to work at camp.

Back at the Floating Rib, Bobbie meets with Felicia, who is still with Nathan. Nathan receives urgent texts from Amy, so he uses Bobbie’s arrival as a way to escape his mother-in-law. Bobbie asks Felicia to help her take down Nelle, but Felicia refuses. Felicia suggests they suck it up and let Michael live his life. Carly returns to work and runs into Michael with Nelle. Michael invites her to joing them for lunch, but Carly refuses. The couple takes off, and later Sonny arrives and meets up with Carly. Sonny gives Carly the good news about Jax, which he’s already told Joss. He also tells her about Joss’ new friend Oscar, which sends Carly through the roof because he was the boy from the party. Carly realizes she has to intervene and do something.

Back in Scott’s room, Scott gives Serena a call and leaves her a message about Lee’s passing. He starts drinking, which Lucy points out is not the proper way to honor his father given his problems with alcohol. Scott lashes out that he was a disappointment to Lee in life, so he might as well be one in death. Scott feels like he took advantage of Lee and took him for granted. Scott reflects back on some of his arguments with Lee. Lucy refuses to let Scott feel sorry for himself, and he is not the man he was years ago. Lucy knows Lee was proud of the man Scott became after Serena was born. Scott asks to be alone, but Lucy refuses. Suddenly there is a knock at the door, it’s Serena (played by Carly Schroeder).

Nathan meets with Amy at GH. She has the photoshoot proofs for him to look at. He doesn’t think that was worth blowing up his phone over. She admits there is a problem, and needs him to be the face of the brand one last time. Amy explains she’s low on cash and needs Nathan to give an interview. He refuses and suggests she use this opportunity to reveal the truth. Amy thanks him for his help so far and cries she’ll figure something out. Nathan caves and agrees to do the interview.

Michael and Nelle walk into the Floating Rib and find Bobbie ranting to Felicia that it is hard to watch Michael get suckered by Nelle after what she did to Carly. Michael and Nelle grab a table, and Felicia advises Bobbie and Carly to decide whether or not to interfere with Michael’s life. If they want to, she’ll take the case. Felicia leaves, and Bobbie glares at Michael and Nelle. Nelle excuses herself to use the restroom and give Michael a chance to speak with Bobbie. Michael tries to reason with Bobbie, and points out how many second chances she and his mom were given. He returns to Nelle, and Bobbie calls Felicia. She wants to move forward, so Felicia plans to head to Florida which is where she thinks the real dirt on Nelle is.

Alexis meets with Valentin to discuss something important.

Scott is surprised to see Serena.

Amy and Nathan prepare for their interview.