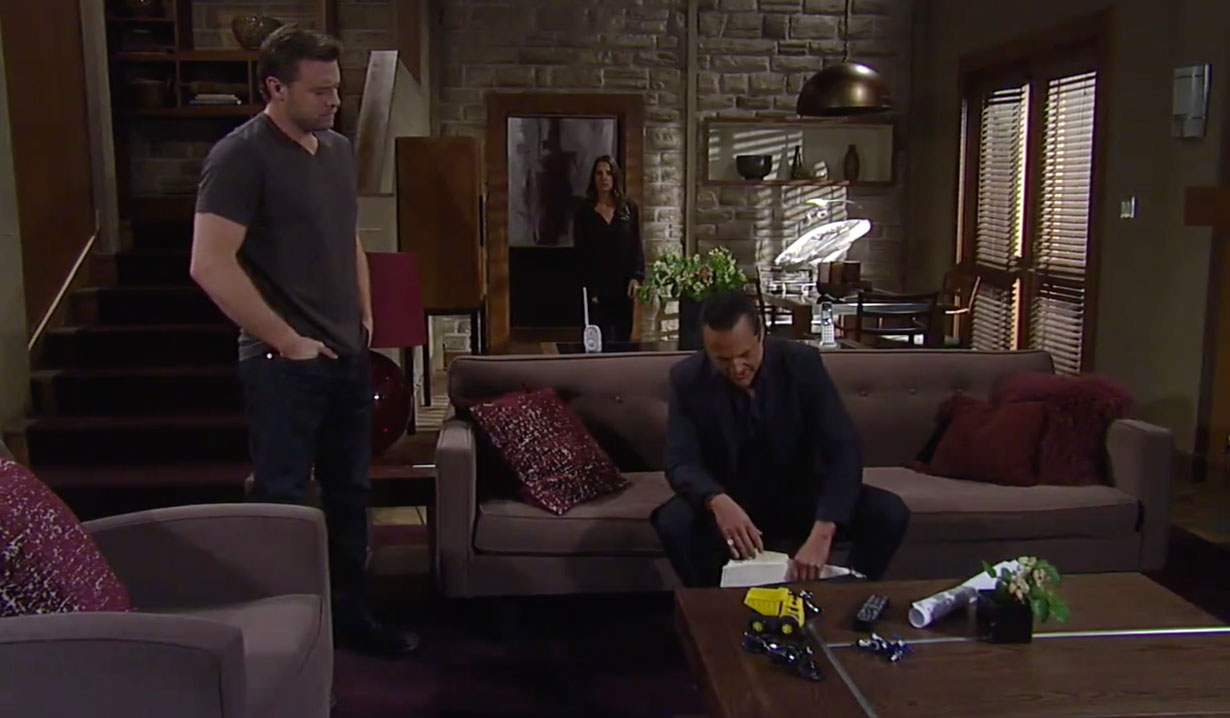 [Due to breaking local news, this summary began at 3:07 PM EST] Kevin and Laura have lunch at the Metro Court, and the doctor worries about Laura given the anniversary of Nikolas’ death is approaching. Up in the Crimson offices, Julian visits Nina to discuss business numbers. She points out Crimson is the only property he owns which is doing well, so he should focus on his other ventures. Nina shows Julian the door and finds Valentin waiting to see her. She agrees to give him a second and invites him into her office. Valentin wants to buy an ad for his new non-profit he just set up offering a safe home for washed up racehorses to save them from being destroyed. Nina accuses him of using her soft spot for horses to woo her, and that it doesn’t make up for everything he’s done, such as killing Spencer Cassadine’s father. Valentin claims that was an event open for interpretation. Meanwhile, Julian heads down to the restaurant and walks in on Kevin consoling Laura that at least Valentin is gone. He tells them that Valentin is free and back in Port Charles. Laura realizes she needs to call Lulu.

In the park, Joss introduces Spencer to Oscar. Oscar invites them to join him at the camp food tent, but Spencer needs to run his lines for Hamlet, the play the camp is putting on. At the hospital, Carly rants to Bobbie about Nelle and Michael attending the wedding together, and that she’s positive that Nelle is going to hurt her son. Bobbie has a plan, and calls Felicia and asks her to find out what else Nelle is hiding. Bobbie suggests if they can expose more dirt on Nelle that Michael will end things on his own.

Sonny drops by Jason and Sam’s place and pulls out a roll of plans. Sam has more visions of Sonny taunting her, so she excuses herself and leaves. Sonny asks Jason to partner with him in a completely legit business venture developing retail space. Jason declines, stating people will assume this is a front and he is taking over his business. He can’t take that risk and endanger his family. Sonny understands, and decides to ask Michael if he would want to work with him. Sonny leaves and in the hall, takes a call from Diane who passes on some good news.

Sam finds Julian at the Metro Court bar and asks for his help. She informs him of Sonny’s claim of quitting the business and going legit. Julian laugh. That won’t happen. Sam only wants to keep Jason away from Sonny, and she tells Julian if he wants a relationship with her or his grandchildren then he needs to start caring about this. Julian says the only guaranteed solution is to get rid of Sonny. Sam has more visions of Sonny goading her, saying that she doesn’t have the guts do to what is needed. Sam asks Julian not to tell her mother or anyone about this conversation, and she walks off. Sam makes a call to someone to make a purchase. In the restaurant, Laura gets an update from Lulu over the phone, and asks Kevin to go with her to get Spencer before Valentin can get near him. Back up in the Crimson offices, Nina vents to Nelle about Valentin. Nelle knows her boss still loves him and asks what it would take for her to see a future with him. Nina would need to know she and Charlotte are more important than the demons from his past. Back in the park, Valentin finds Spencer running his lines and promises he is not here to hurt him. He brings him a peace offering, a Cassadine ring that Mikos left to his sons. He wanted to pass it on to him. Spencer tells him this doesn’t make things between them even given he killed his father. Valentin thinks he knows a way to even the scales between them, but before he can say more, Laura and Kevin swoop in to protect the boy. Laura warns him to never come near Spencer again. Spencer tosses the ring back to Valentin, and walks away after vowing to bury his uncle. Elsewhere, Sonny discovers Joss with Oscar and asks to speak with her because he has good news. When Joss refuses to speak to Sonny, Oscar stands up to protect her.

Sam returns home and finds out that Jason turned down Sonny’s business offer. He swears to Sam that he’s not going back into business with Sonny. Jason heads off when Scout wakes up, and Sam pulls out a gun and promises to make sure Sonny isn’t an option for Jason.

Carly plans to play Nelle now that she knows her game.

Felicia asks Nathan if he’s keeping something from Maxie.

Sonny informs Oscar who he is.