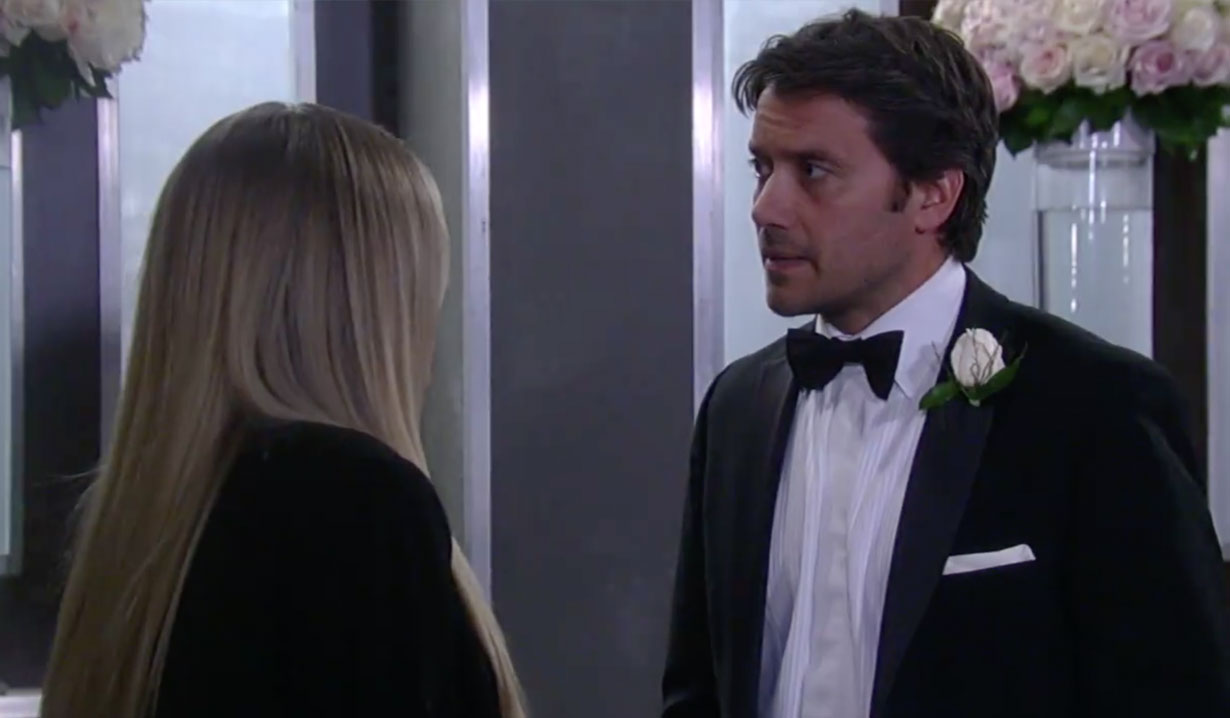 Hayden works late at GH. Liz has a break coming up, so she offers to take her out for some pregnancy food. Hayden accepts. At the PCPD, Finn arrives to see Obrecht with deal. Nathan implores his mother to hear him out. Finn speaks with Obrecht alone, and informs her that he and Monica want her to resign immediately, to admit what she did, and to apologize to him and the hospital. If she does this, then the charges against her will be dropped and she’ll be freed. She doesn’t consider that freedom, so she declines. Obrecht hates Finn because she had everything before he came. She was getting to know her son and she was Chief of Staff. He points out he only had one patient to treat, and had she let him do that without making the stink she did, then he would have left town long ago. She suggests he could still leave, but he has a love and a child on the way now. He suggests she take his deal or else she won’t be seeing her son except through Plexiglas.

Anna runs into Andre at the Floating Rib, and they discuss the amazing time they had last night. However, they both agree they are not ready for more and should stay friends.

At the Metro Court, Dante gives Lulu the news that Valentin is out of prison. Lulu doesn’t understand how this happened. Dante suggests they call Anna.

Nina wakes up on the couch at Wyndemere to find Valentin standing over her. She jumps into his arms. Valentin explains the charges against him were dropped, likely because the WSB didn’t want the truth about the Chimera made public in a trial. He hoped on the first plane to return home to his wife. She points out he doesn’t have a wife anymore and suggests he go see Charlotte. She tells him that she’s at the Metro Court for Dante’s mother’s wedding. Nina walks out. Back at the Floating Rib, Anna gets Dante’s call and is stunned by his news. She tells him she’s on her way. Elsewhere, Liz and Hayden grab some food. Hayden is suddenly hit with a pain in her abdomen. Andre rushes over to help, and they decide to get her back to GH to be looked at.

Anna meets with Lulu and Dante at the Metro Court, where Valentin appears. Valentin hugs Charlotte and promises her that he will never leave her again. Lulu takes Charlotte to get some lemonade, and Valentin provides Anna and Dante with the paperwork detailing his release from the WSB. Valentin states he is free, and he’s here to take his daughter. Dante won’t let that happen, but Valentin reminds him that Lulu only has temporary custody. He tells Charlotte she should go home with Lulu and Dante for the night, because he has to get Wyndemere ready for her to come home to. Lulu and Dante leave with Charlotte, and Valentin invites Anna to have a drink with him. Valentin had a long time to think about their past and what he did, and he realized he wouldn’t have Nina or his daughter if not for her. Anna advises him not to blow this second chance. Nina drops by the station to see her brother and tell him about Valentin. She needs him to remind her why she’s better off without her ex. Back in the detention area, Obrecht tells Finn she will consider his deal, so he leaves her to think about it. Finn heads back to the precinct, and Nathan puts Nina on pause to check in with him. Finn is certain Obrecht will agree to his terms. Finn leaves, and Nathan tells Nina that he needs to deal with some things, but to remember all of Valentin’s lies and how he left her for Anna all those times. Nathan checks on his mother, who fills him in on Finn’s deal, which will cost her the ability to practice medicine. Nathan points out it is better than prison. He leaves her, and Obrecht realizes her freedom will allow her to get revenge and take the most important thing in Finn’s life from away him.

Andre checks on Hayden, who is in a room at GH with Liz. Liz has to get back to work, and Hayden thanks Andre for being there for her. She’s embarrassed because all her food cravings led to a bad case of indigestion, though she admits this scare made her realize how much she wants this baby. Later, Liz thanks Andre for his help and admits how excited she is to be an aunt.

Finn heads to the Floating Rib to meet Hayden. She asks if Obrecht took the deal. He thinks she is considering it.

Nina finds Julian sitting in her chair at Crimson. He has news for her.

Kevin asks Laura if it helps knowing Valentin is gone.

At camp, Spencer runs into Joss and Oscar. Spencer says, “Hamlet did it all wrong, I won’t.”

Carly vents to Bobbie that she has to stop Nelle from hurting Michael.

Sonny drops by Jason and Sam’s place with a gift.