Monday July 10, 2017: Joss gets a lecture, Nina misses Valentin, and Dante gets some bad news. 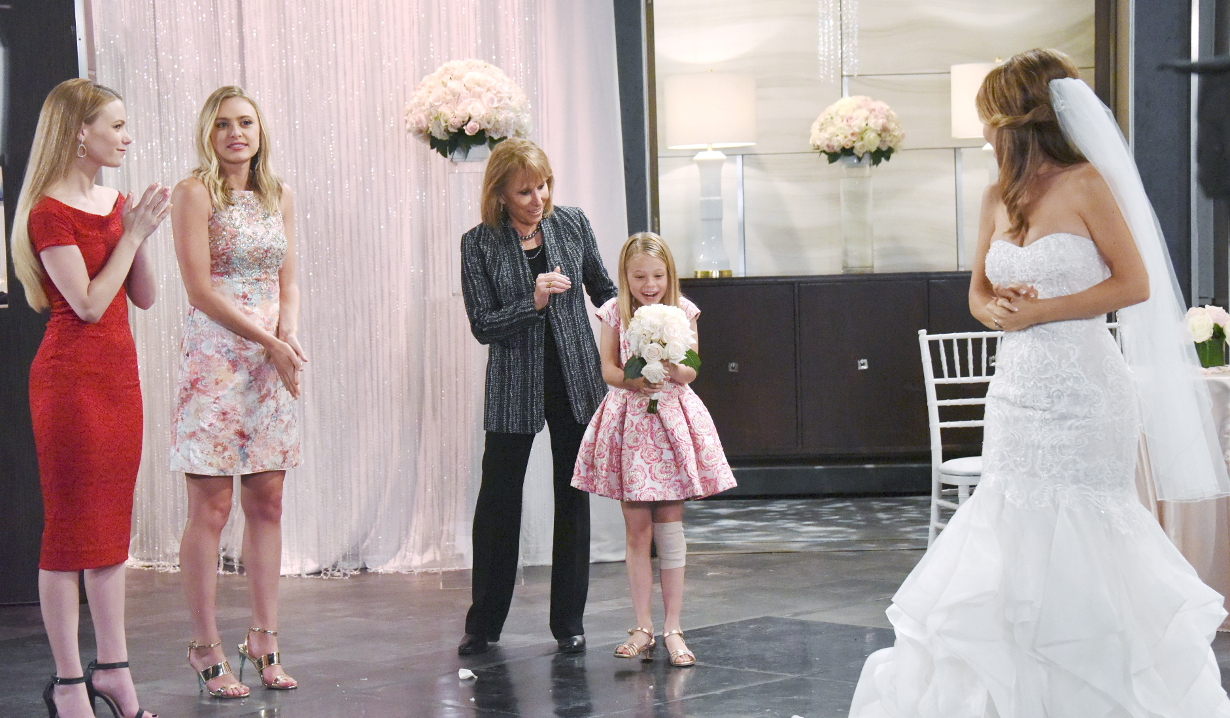 Nina wanders around Crimson, angrily reading a Man Landers column before taking out her wedding ring. She starts typing and then decides she needs a drink. In the Metro Court ballroom, Ned and Olivia’s wedding guests watch the fireworks on the balcony. Sonny gets a text from the nanny saying that Joss is not at Carly’s. Carly sends a text to her daughter and panics. Before they can leave, Sonny takes Olivia aside to say she deserves every happiness and Ned is a lucky man. Over at a table, Dante hangs out with Charlotte and Laura. Monica calls for the toasts to begin. Dillon makes the first, thanking Olivia for making all their lives brighter and preventing Ned from dying a ‘spinster’. Ned explains how grateful he is that Olivia is taking his name. He could think of no one else who could follow his grandmother’s footsteps as Mrs. Edward Quartermaine. When Nina wanders through, Charlotte rushes up to her. Olivia and Dante assure Nina she’s welcome to stay for a drink. Liv joins Ned for the first dance while Nina catches up with Charlotte. The little girl likes living with Lulu but really wants her papa to come home so they can be a family again. Michael and Nelle say hello and then Liv calls them onto the dance floor. Dante asks Charlotte to dance. Nina downs some booze and takes off as Kevin arrives. He informs Laura that her grandson has run off and shows her the text he left. She has a pretty good idea where Spencer went. They rush out. Soon after, Liv and Ned make a little speech thanking everyone and she throws the bouquet. It lands in Kiki’s hands. She quickly throws it to Charlotte. Dante thanks his mother for the life she gave him. He wants her to enjoy the rest of hers. She wouldn’t change anything that’s happened. Ned leads his bride away while the guests blow bubbles at them. He takes her to the bridal suite and they flop into the bed, declaring they are the luckiest people on the planet. Back downstairs, Dante gets a call. “That’s not possible,” he says. Lulu shows up and her husband informs her he has bad news.

Nelle and Michael go up to Crimson so she can change out of her borrowed dress. He unzips her and they make out. Joss and Oscar are on the bridge watching the fireworks. He thanks her for coming out to talk to him. She notices the time and realizes she has to go. A text from her mom comes in and she panics. Oscar offers to take the blame.

Nina goes to Wyndemere and thinks of Charlotte. Spencer pops up with a box he found in his father’s old room. He assumes it has his grandfather’s true will in it. Laura and Kevin arrive and she begins lecturing the kid. They decide to let him open the box. The paperwork inside is Mikos’ will but it’s the same will that leaves everything to Valentin. Nina offers to let Spencer spend time at the castle whenever he likes. After Nina is left alone, she sits and tells herself how much she misses Valentin. Later, a man enters the room as she sleeps. She wakes up and gasps.

More: Spoilers for all the soap operas

On the way home, Spencer asks Laura and Kevin to leave him on the bridge with his thoughts. He vows to fight for his inheritance and claim what’s his. He rips up the will. When Carly and Sonny get to her place, Joss is already there. She claims she didn’t get her mother’s text. After Sonny walks off to check on Avery, Joss complains about being grounded. Her mom points out it’s supposed to teach her a lesson. Joss points out that her mother is never held accountable for anything and keeps making the same mistakes. Carly says being human is about making mistakes. She wants her daughter to make better decisions than she did. That’s what Joss wants for her mother too. Sonny returns and says Joss is right. He admits that he’s made mistakes and assures her that things will be different this time. Carly walks him to the door and Oscar sends Joss a text.

Anna blows up at the WSB.

Nathan gets some devastating news.

GH Recap: After a few tribulations,...