GH Recap: After a few tribulations, Ned and Olivia head down the aisle 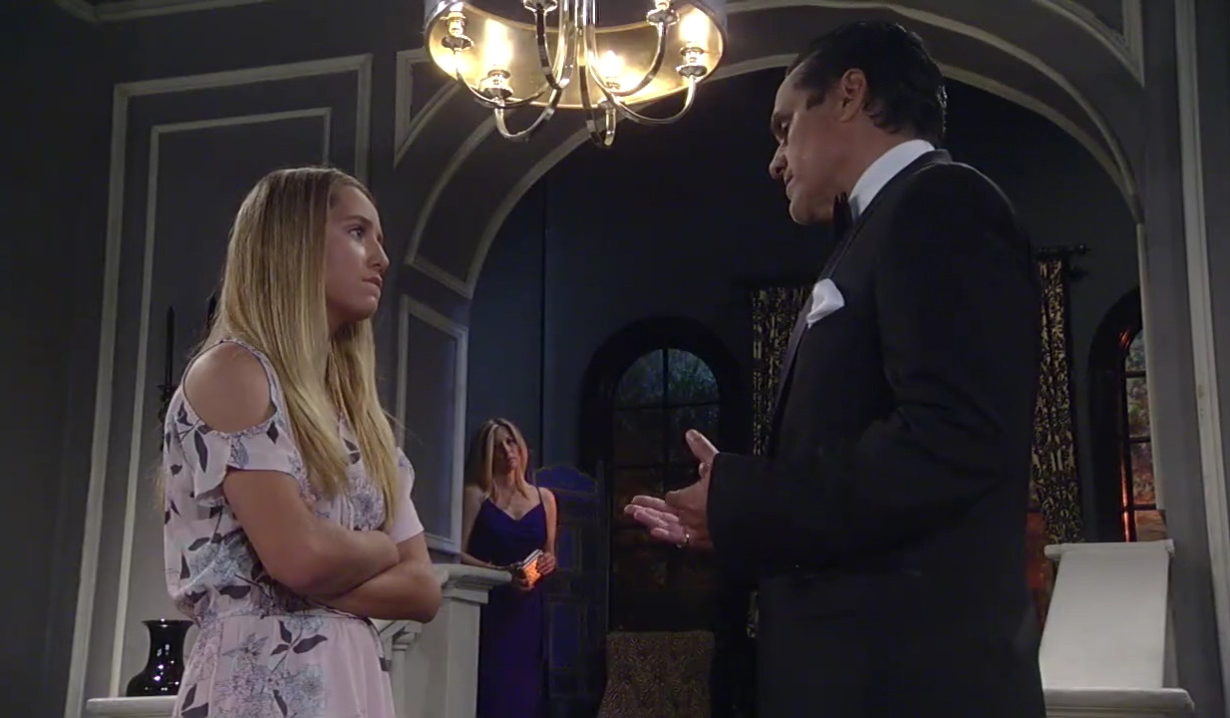 At home, Joss continues refusing to go anywhere with her mother if she’s with Sonny. Carly orders her to be civil. When she walks off to get ready, Sonny shows up. He knows Joss is angry with him for what he did to her dad and feels bad about it. Carly watches while she thanks him for his apology. He promises to prove himself this time. Carly comes out and reminds Joss that she’s grounded. After the couple leaves, Oscar sends her a text, asking her to sneak out to see him. At the Crimson offices, Nina assures Nathan and Amy that no one will ever find out the truth about Man Landers. Nelle starts knocking on the door. Nina goes out to her and signs some paperwork, urging her off to the wedding. Nelle worries about her dress so Nina offers her a designer sample. Soon, Nelle is spinning around in a red dress. Meanwhile, Amy listens to Nathan covering with Maxie on the phone. She decides they shouldn’t keep up this pretense anymore. The cop assures her everything will be fine. Besides, helping her gives him something to do. Nina joins them and complains about Valentin never coming back. Amy complains about being single. Nathan encourages her to get out more. Nina and Amy joke that he sounds like Man Landers.

More: Emme Rylan reveals the name of her baby At the Metro Court, Ned and the rest of the wedding party agree to try to prevent Olivia from discovering her jail escapade made it into the papers. Charlotte is excited when Michael explains that Nelle is coming. Dillon brings in a package from Tracy for Ned. It contains monogrammed champagne flutes and a congratulatory note. Upstairs, Laura, Monica and Kiki and show up in Olivia’s room. The bride-to-be tells them about her raucous evening with the firefighter and her arrest. They pretend they haven’t heard anything about it. Olivia starts freaking out when she notices her dress hasn’t arrived. When Kiki tries checking for a delivery update on her tablet, Olivia notices her picture in the paper. 500,000 people have seen it. Liv is mortified. Laura assures her the Quartermaines have done worse but Olivia thinks this is a sign and the marriage is doomed. Ned shows up at the door. She tells him the wedding is off. Keeping his back to her, Ned assures her that everything will be okay, even if she walks down the aisle in a pillow case. Monica shows up with a gown she got from Nina. Olivia sends Ned away. Lulu gives Olivia earrings that belonged to Connie, Laura gives her a hanky and Kiki gives her a blue garter. Sonny and Carly arrive in the Metro Court ballroom. They discuss her daughter and he tells her not to worry. When they spot Michael with Nelle, they storm over. Michael asks his parents to respect his choices. Nelle apologizes and hopes she can make amends. She and Michael go off for a drink. Sonny advises Carly not to interfere. When they sit down, Laura joins them and congratulates them on their reunion. The ceremony starts. Dante walks his mother down the aisle to Ned. Olivia says Ned is better than any man she could have dreamed of. She’ll love him forever. Ned picks up a microphone and sings his vows, bringing her to tears. They complete their vows and exchange the rings. Everyone claps as they kiss. Sonny tells Carly they should renew their vows. She’d love that. Ned and Liv go out to the balcony and fireworks go off.

Joss meets Oscar on the bridge. He gives her flowers and they admire the view of the city. Oscar tells her about his problems with his mom and his absent father. She tells him about her dead brother. When she sleeps, she dreams everything is okay. They commiserate about their mothers. As the fireworks go off, they touch hands.

Dante shares a dance with Charlotte.

Nina runs into someone at Wyndemere.