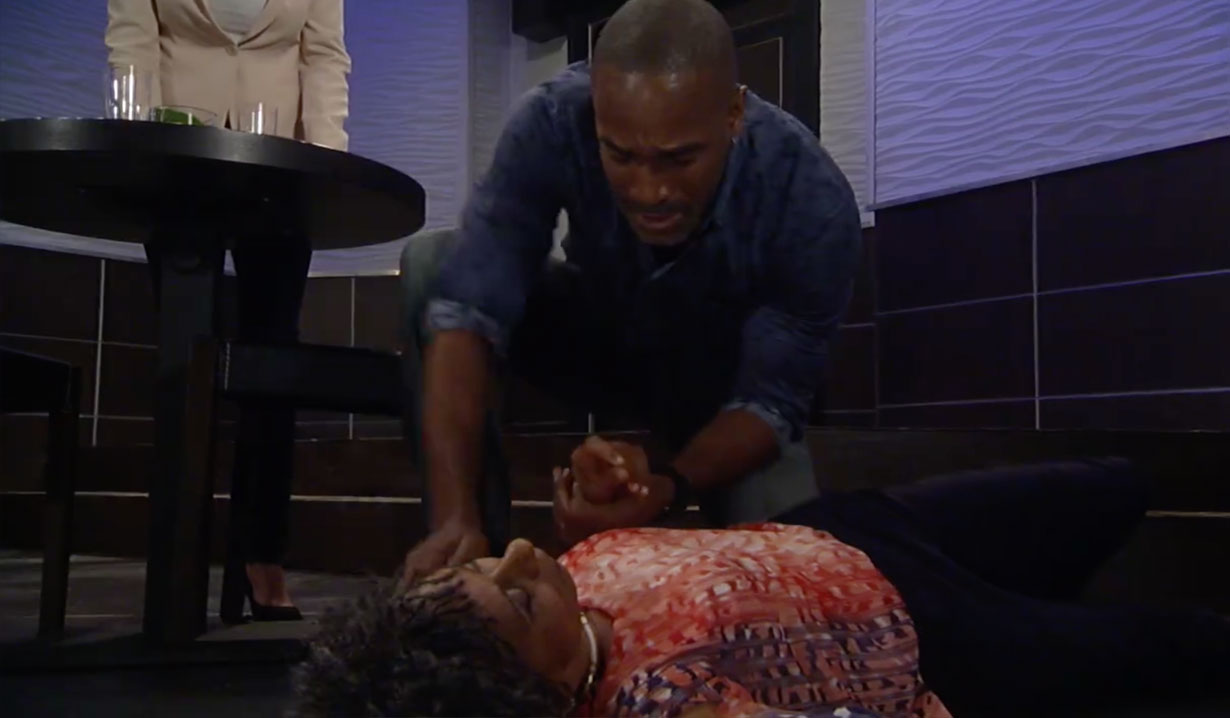 Olivia drops off food for the bachelor party at Ned’s room at the Metro Court for him, Dillon, Michael and Dante. Suddenly, Lulu and Laura show up with a boa and crown and surprise Olivia to take her away for her own party. After the girls are gone, the boys play poker and Dillon breaks out some cigars. Ned reminds him this is a non-smoking hotel, but Dillon doesn’t listen and a trashcan catches fire. Down in the restaurant, Curtis rushes to Aunt Stella after she passes out. Jordan calls an ambulance and thinks Stella had a stroke. Meanwhile, Laura and Lulu try and get Olivia to loosen up, have fun and stop being so responsible. Olivia agrees to try and have fun and drinks a martini. At Carly’s place, she and Joss argue about Joss’ desire to live with Jax. Joss learns she can’t because he’s in Abu Dhabi for six months on business. They argue, and Carly is paged with a work emergency, and has to go. Joss sulks and texts Oscar, who tells her that he’s glad she’s not moving to Australia because he likes her. At GH, Jason runs into Liz and talks about his worries over Sam. Liz assures him that Sam is just exhausted and that she’ll be as good as new once she’s on a normal sleep schedule. Later, Stella is brought in, and Griffin informs Jordan and Curtis that Stella had a stroke and it isn’t her first one. They go to see her, and Stella admits her first stroke was years ago after his mother died, and she didn’t want to burden him with it then. She’s had her health under control for years, and thanks Curtis for taking care of her tonight. He tells her it was Jordan who realized what was happening and called 911. Jordan steps out to call TJ, and in the hall, asks Griffin if stress could have caused Stella to have this second stroke. Griffin can’t say for sure, but with each stroke the victim’s survival rate decreases.

More: Former GH actor Ian Buchanan returns to The Bold and the Beautiful At Sonny’s restaurant, Sam stabs him several times in the stomach and he goes down, but it is only another one of her delusions. When she snaps out of it, Sam goes off on Sonny and tells him if he cares about her and Jason then he’ll stay away from their family. They are interrupted by a call from Jason, asking Sam where she is. She suggests they meet at the Metro Court, and after the call apologizes to Sonny for snapping at him and asks him not to mention this to Jason. She heads out.

Back at the Metro Court, Carly and a firefighter arrive to Ned’s suite to deal with the fire. Ned apologizes, the firefighter tells Carly that as a precaution he has to check the rest of the floors. Down in the bar, Olivia drinks one too many martinis and Laura decides to cut her off. Olivia screams she’s ready to go to the Haunted Star and see the strippers. Laura changes the plans and get Olivia upstairs to a room. A drunk Olivia admits she’s terrified of getting married, but Laura assures her that is normal. Olivia passes out, so Laura leaves her. Later the firefighter knocks on the door to check the room, and a drunk Olivia thinks he’s the stripper. She pushes him on the bed and jumps up and down on it. Meanwhile in the bar, Sam meets with Jason and tells him the doctor said she had an iron deficiency and she just needs some vitamins and sleep.

Carly finds Sonny at his restaurant and tells him things with Joss are getting worse, and wishes they could all sit down and just talk this out, including Jax. Carly takes off, and Sonny makes a call to someone and tells them he has a job for them.

Olivia, in her nightie and wearing her boa and crown, winds up in the PCPD jail for manhandling the firefighter. She asks a cop who is new to call her son Dante and he will fix this, but he thinks she’s lying and calls her a streetwalker.

Back at the boy’s party, Dante gets a call from the precinct that his mother has been arrested. In the bar, Jason tells Sam that Sonny is quitting the business and looking for someone to take over for him. Sam has more delusions of Sonny gloating that he’s never leaving the business, and neither is Jason.

Back at the PCPD, Dante arrives to bail his mother out. The new cop apologizes for not believing her when she said she was Dante’s mother.

Sonny hopes to Joss that she can forgive him one day.

Nina tells Nelle she will blow Michael’s mind when she walks into the wedding.

Amy worries to Nathan that they shouldn’t continue what they are doing.

Ned asks his friends and family for a huge favor.

Olivia tells the girls that the wedding is off!

GH Recap: After a few tribulations,...