GH Recap: A delusional Sam takes care of her problem in a shocking way 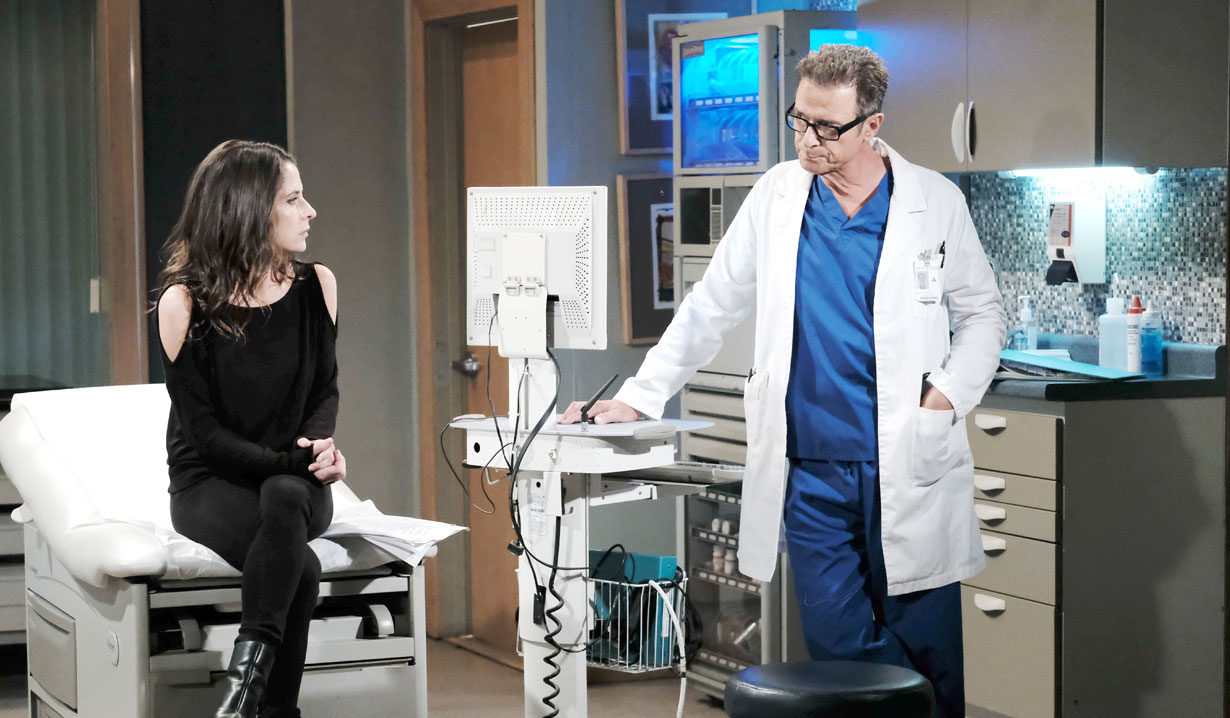 Jason receives a text from Sonny asking if he’s free, but ignores it because he and Sam are waiting at GH for her appointment. Dr. David Bench (played by James DePaiva) introduces himself and suggests they go into an exam room. However, he prefers to meet with Sam alone, so Sam tells Jason go see Sonny. Sam heads into a room with Dr. Bench, and she explains that she’s not been herself lately. He asks for more details, which causes a voice in Sam’s head to urge her to lie to the doctor or else she won’t be around to protect Jason. Sam tries to downplay her issues, and he suggests she may have postpartum depression. He runs some bloodwork, but it only shows she has an iron deficiency. He decides to run more tests at a later date. As Dr. Bench sets up her appointment, Sam has a vision of Sonny telling her that she can’t fix what’s wrong unless she gets rid of what is distracting Jason. In the hall, Jordan tells Curtis that she has to arrest him for unlawful access to medical records. He is shocked, but quickly realizes she’s joking with him. He asks her out for a drink. Molly and Alexis meet TJ and his Aunt Stella at the Metro Court, and Aunt Stella wonders where Curtis is. TJ tells her that he couldn’t make it, and Stella knows he’s just trying to cover for the fact that she and Curtis are having problems. TJ and Molly eventually leave for the night, leaving Stella and Alexis time to get to know one another. They talk about how great Molly and TJ are, and Alexis admits even if they were that she doesn’t meddle in her children’s relationships anymore because it has backfired on her. Stella doesn’t like interfering either, but does make her feelings known in a way that gets her results.

Anna and Andre finish their disco dance at the studio and share a kiss. He apologizes, but Anna suggests they go back to her place.

At Crimson, Nina receives a call from Valentin, who is in a cell in the Netherlands. He misses her and loves her. Nina asks about his trial date, but he says there won’t be one because the WSB is going to make him disappear. Nina promises to print the truth if that happens, but he tells her not to and to forget he existed and move on with her life. He apologizes for bothering her and hangs up.

Curtis and Jordan end up back at his place where they have hot passionate sex. After, Jordan thinks she made a mistake. Curtis disagrees and refuses to let Aunt Stella dictate their relationship.

At the studio, Andre and Anna discuss what they are to one another, but are interrupted by a call from Nina, who needs to see Anna. Jason meets with Sonny at his restaurant, where Sonny informs him of his decision to get out of the business. He thinks Sonny is asking him to take over, but Sonny promises him that isn’t the case. However, he warns Jason he needs to be ready for any danger heading his way because of this decision. Anna meets with Nina at Crimson, where Nina tells her about the phone call from Valentin. She is afraid the WSB may actually make him disappear or worse, but Anna assures her that the current director wouldn’t do that. Anna promises her that the WSB will put him on trial and convict him, and it is best she not take any more calls from him and distance herself from her ex.

Back at the Metro Court, Stella fumes when Jordan and Curtis walk in hand-in-hand. She lays into him for being too busy to make time for his family tonight. Curtis believes TJ and Molly were better off without him here because of the drama it would have caused, and he tells Stella she needs to accept he is with Jordan. Suddenly, Stella passes out!

In his cell in the Netherlands, Valentin writes a goodbye letter to Nina and thanks her for giving him a few wonderful and happy months, and vows that he will always love her. He is also grateful that Charlotte will always have her in her life. Later, a man comes for Valentin and cuffs him.

Anna meets up with Andre at the hospital to try and pick up where they left off. Elsewhere, Jason finds Dr. Bench and asks about Sam, but he tells Jason she left.

Sam arrives at Sonny’s restaurant, and in a delirious state attacks and stabs Sonny in the stomach.

A fire breaks out at Ned’s bachelor party.

Curtis rushes to Stella’s side.

Laura tells Olivia to take the night off and enjoy her bachelorette party.

Liz tries to assure Jason that Sam will be as good as new once she’s back on a regular sleep schedule.

Sonny collapses after being stabbed.

Carly tells Joss they have to talk about her father.