GH Recap: Aunt Stella learns the truth about TJ from an unlikely source

Thursday June 22, 2017: Aunt Stella fumes over the truth about TJ's parentage, Jason heads to the islands to warn Sonny of danger, Sam worries for Jason, and Sonny and Carly connect in Puerto Rico. 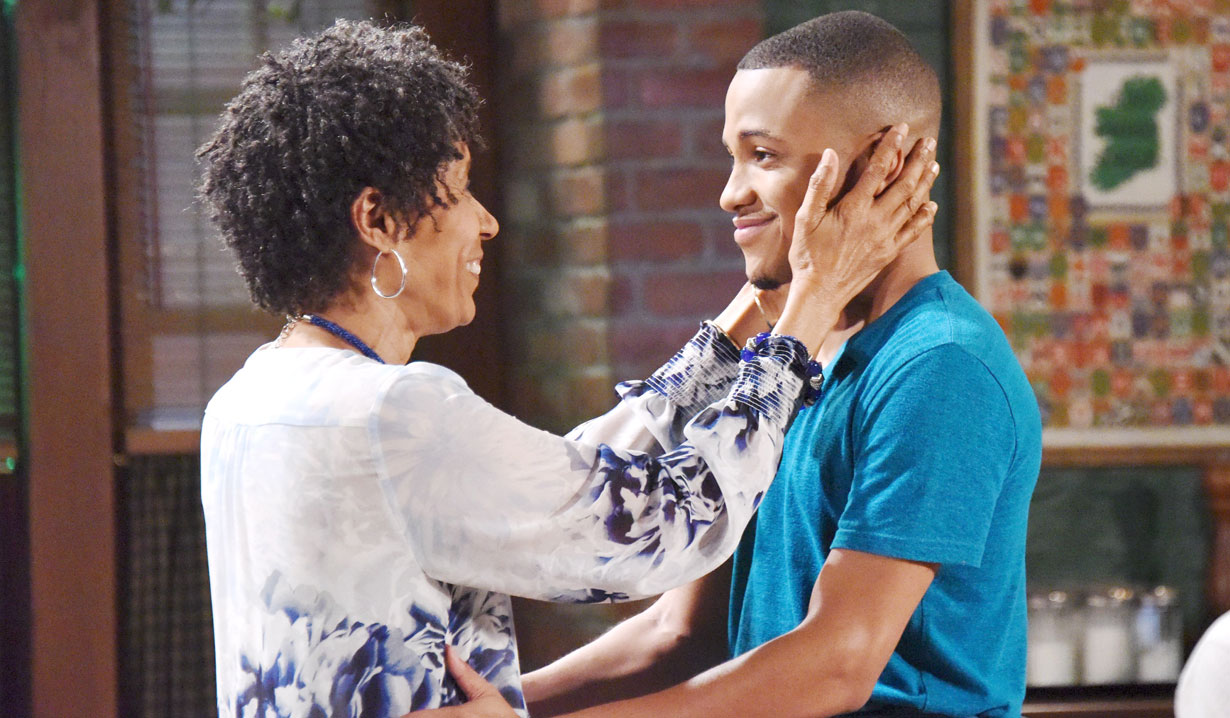 Outside of Kelly’s, Laura and Kevin run into Molly. She tells them she just saw Spencer getting into an Uber, and he was mumbling about securing his family legacy from the owner of Crimson. They thank her and take off. Molly heads inside and meets up with TJ. As they flirt, Aunt Stella waltzes in and spots them. TJ gets back to work, and Stella uses the opportunity to meet Molly. Stella didn’t even know TJ had a girlfriend, and talks about how she’s missed out on so much of TJ’s life due to their family’s complicated history. Molly believes she’s speaking of the truth about Shawn, and blurts out that TJ is still coming to terms with Shawn being his biological father. TJ returns, and Stella keeps mum about what Molly told her. Molly has to go, but hopes to get to know Stella better. Stella confronts TJ about learning the truth from Molly, and vows to make Jordan answer for keeping this from her. Spencer confronts Nina at Crimson for trying to steal his birthright. She believes there has been a mistake, and tries to reason with him about Valentin’s situation. He breaks down that it’s because of Valentin his father is gone. She comforts him as Laura and Kevin walk in. Laura apologizes to Nina and then scolds Spencer for his behavior. She confiscates his cellphone, and orders him to apologize to Kevin and Nina. Laura sits Spencer down in private and knows he is hurting, but tells him they need to let the law take its course. This gives Spencer an idea, and he states, “Valentin won’t know what hit him.” Meanwhile, Nina asks Kevin if she is a coward for running out on Valentin when he needs her the most. Kevin assures her that she did nothing wrong because Valentin wasn’t truthful with her about his past. Nina knows she has no choice but to move on.

Jordon drops by to see Curtis at his place and informs him they need to cool things off until his aunt leaves town. Curtis thinks his Aunt’s presence has stirred up unresolved issues and she is rethinking their relationship because of Thomas. Curtis believes all they can do is learn from their mistakes and live their lives, but Jordan feels selfish for moving on. Curtis promises that Thomas would want them to be happy, and he swears to fix things with Aunt Stella. The two passionately kiss before Jordan leaves for work. Later, TJ arrives to try and find his mother because there is trouble brewing with Stella. Curtis asks what is going on, so TJ confesses that Stella knows the truth about Shawn.

At their place, Sam tells Jason she is going with him to the island and there will be no discussion. Jason asks her to level with him about what is going on with her. She confesses about her episodes and fears that he is in danger. Jason tries to ease her anxiety, and refuses to leave her alone. Sam believes she will be okay and advises him to go warn Sonny, whose cell service has been knocked out by the storm. Jason leaves, and Sam tries to keep herself calm, but is overcome by a panic attack. Molly arrives with some BLTs from Kelly’s and can see her sister is worried about something. Sam confides her fears about something bad happening to Jason. Molly suggests it is the stress of having a newborn and her instincts to protect her, and she’s projecting that onto Jason. Later, Sam falls asleep in a chair and dreams that Sonny comes to her and tells her that Jason is his once again. Down in Puerto Rico, Sonny believes he and Carly can find happiness again, and the two move in and kiss. They are interrupted by a knock at the door. Phillipe the liquor distributor arrives with the papers for Carly to sign. He departs after they conclude their business. Sonny lets Carly know they’ll likely have to stay here the night due to the late hour and storm. The two kill time by drinking mojitos and playing cards. The drinks get to Carly, who decides to take a walk. To clear her head. She opens the door to find Garvey standing there.

Back in Port Charles, Aunt Stella arrives at the PCPD and lashes out at Jordan in front of all her officers. She calls her trash and a faithless whore for passing Shawn Butler’s child off as Thomas’. All the officers’ heads turn.

Curtis arrives at the station as Stella continues to berate Jordan.

Joss’ friend texts some guys to bring beer to their party.

Nelle confesses to Michael that she’s lucky to have him in her life.

Monica asks Sam why she has a sudden urge to go to Puerto Rico.

Sonny fights Carney and a gunshot goes off.