GH Recap: Sonny and Carly receive an unwanted visitor on the island

Wednesday June 21, 2017: Michael has a proposition for Jason, Amy tries to save the Man Landers deal, Nelle starts work at Crimson, and Sonny and Carly wait out a storm on the island. 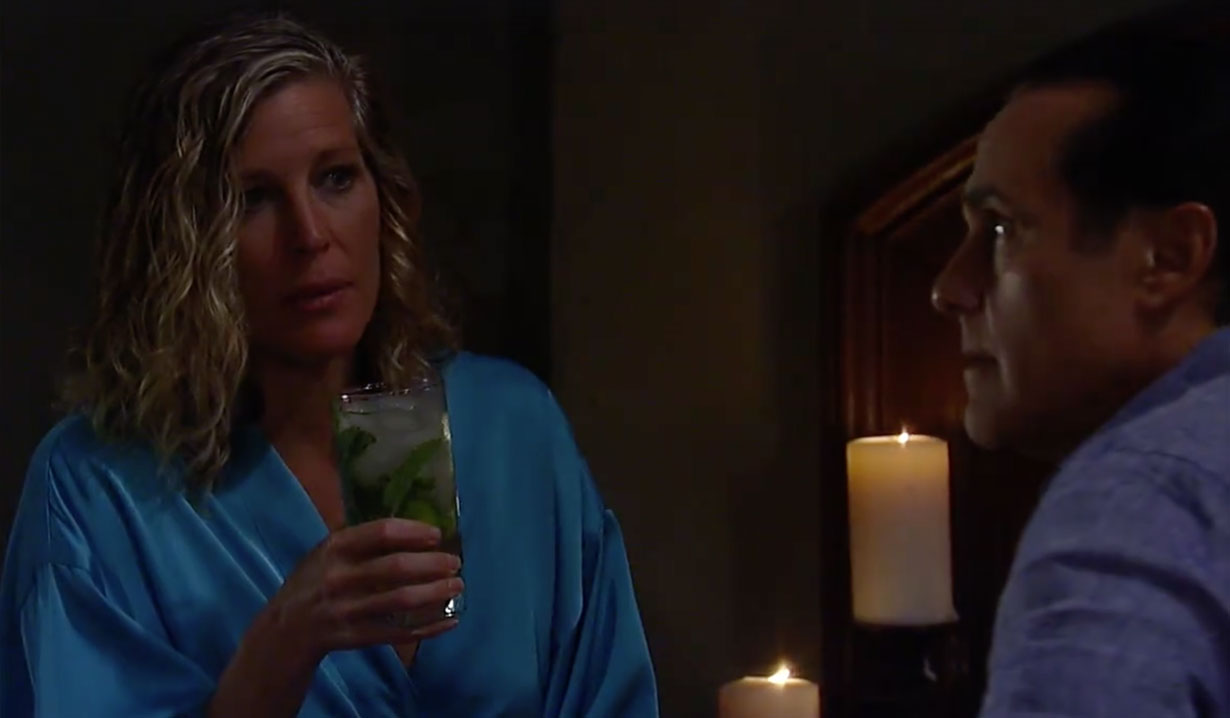 Nelle and Nina get to work at Crimson, where talk quickly turns to Charlotte. Nina misses Charlotte, but doesn’t want to hang around and confuse her given she’s now with Lulu. Nelle tells her that is nonsense and she should remain in Charlotte’s life. Nina doesn’t think Lulu would be comfortable with that. Nelle points out that Charlotte’s happiness is what is important. They get back to work, and later Nina sends Nelle to Kelly’s to pick up her lunch. Kevin and Laura take Spencer to lunch at Kelly’s, where Spencer complains about losing Wyndemere to Valentin. Kevin explains the legalities of Mikos’ will and that Spencer’s fortune wasn’t stolen, that it was rightly Valentin’s all along. Spencer asks what will happen to Wyndemere after he goes to jail. Laura believes that will be up to Nina, which infuriates Spencer further.

More: Find out which soap operas are on the Fourth of July Lulu and Charlotte drop by the PCPD to give Dante his phone, which he couldn’t find earlier. Charlotte recognizes the background of the station as the place her father made the video for her and asks why he was here. Lulu and Dante tell her that her papa came here to answer some questions about Jake’s magic trick at the Nurses’ Ball, and then he had to go elsewhere to answer other people’s questions. She believes he will be coming back to her soon. Lulu and Dante tell her until then she will be staying with them. In Quinn’s room at the Metro Court, Nathan refuses to allow his photo to be used to promote the book. Quinn says his face is the brand, so no picture, no publisher. Amy takes over and agrees to the photo shoot, as long as his face is kept in the shadows except for one eye because this preserves the mystery of Man Landers. Amy describes her vision of the book cover, and Quinn agrees to it. Quinn thanks them for the meeting and sends them on their way. In the hall, Amy thanks Nathan for trusting her and gives him a hug. At his place, Jason calls Sonny and leaves him a second message warning him about Julian’s former associate possibly being after him. Michael drops by with some paperwork for Jason to sign involving the family trust. Jason asks about Sonny’s whereabouts, and Michael fills him in on Sonny’s trip to the island. Jason informs Michael about the threat to Sonny, so Michael says he’ll relay the message to Max. Michael switches the subject and invites Jason to join him at ELQ as a project organizer, which excites Sam. Jason turns it down because the job would take him away from his family for a few weeks to months at a time. Michael gets a text from Nelle asking to meet, so he tells them he needs to go. Michael leaves, and Sam argues with Jason about the job. She wants him to do something that doesn’t involve him getting shot at for Sonny. Jason doesn’t want it, and promises her that he’s not going back to Sonny’s business. However, he is worried about Sonny and is going to fly down to the island to make sure things are okay. Sam allows it, but only if she goes with him.

In Puerto Rico, a storm thwarts Sonny and Carly’s walk on the beach and sends them back to the hotel soaked. The storm worsens, and Sonny makes them some drinks. They reflect on happier times on the island. Suddenly they hear the sound of breaking glass. Sonny goes to check it out, and it is the local parrot Tito who thinks he owns the place. Carly flips out that nobody has done anything about that crazy parrot in all these years. Sonny wonders why she’s so on edge. Carly admits she feels something bad is going to happen, and perhaps it is just being here and realizing what they’ve lost. Sonny believes they can be happy again and they kiss. Outside a shadow lurks.

Back in Port Charles, Nelle meets with Michael outside of Kelly’s and tells him about her new job. Michael wants to celebrate and invites her to a concert in the park that evening. Nelle accepts. Back inside, Spencer excuses himself to use the bathroom, and when he doesn’t return Kevin discovers the boy has slipped out.

Nathan returns to the PCPD and jokes with Charlotte, asking if she’s joining the squad. She tells him she’s on his way to camp. Lulu heads out with her, and Dante asks Nathan where he’s been. Nathan says he was checking on some stuff.

Spencer waltzes into Nina’s office and demands they talk.

Laura and Kevin search for Spencer.

Jordan tells Curtis they need to cool things off between them.

Sam refuses to let Jason out of her sight.

Sonny tells Carly they will have to stay at his place for the evening.