Tuesday June 20, 2017: Nathan and Amy meet her publisher, Nina makes Nelle an offer, someone is out to get rid of Sonny, and Sonny and Carly encounter problems on the island. 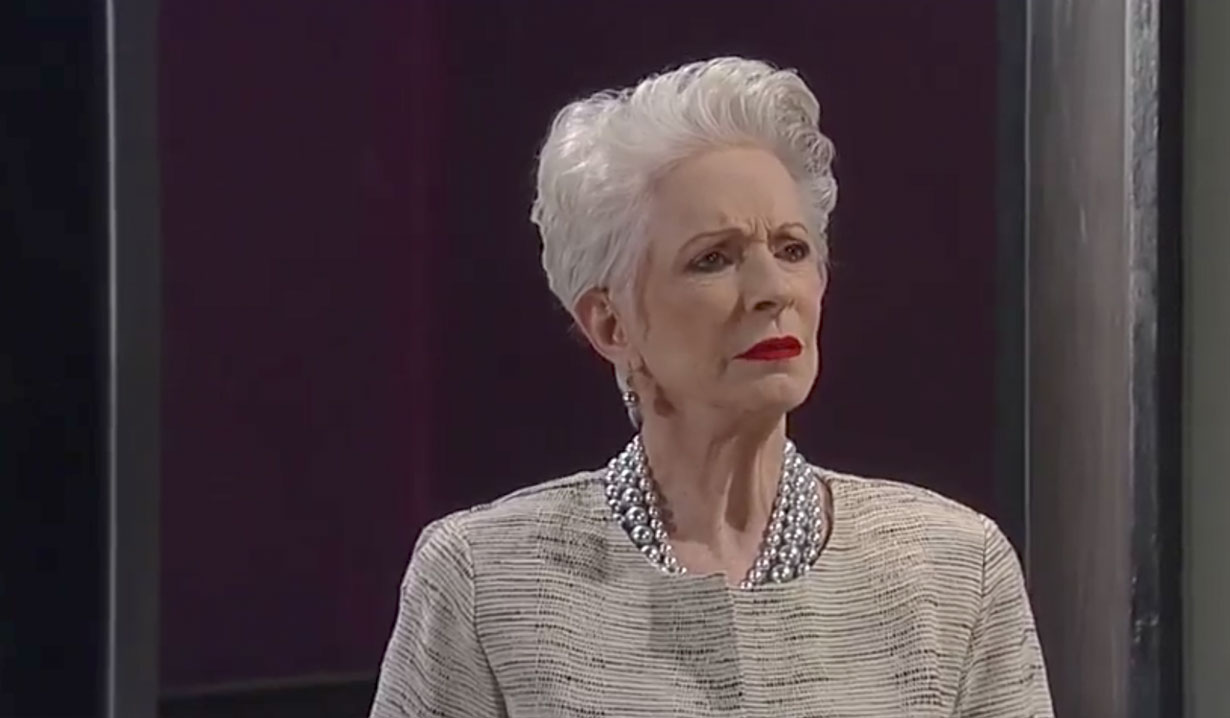 Alexis runs into Julian at the Metro Court, where she notices he is behaving oddly. He claims he can’t talk because he has to put out some fires with Derek Wells Media. Alexis leaves, and Julian meets with an old associate named Garvey from the West Coast who recently got out of prison. Julian asks him what he wants, and the man says, “Sonny Corinthos out of the picture.” Alexis walks back in and spots the two together. Amy and Nathan meet outside of Kelly’s in professional attire in order to meet her publisher. Amy is posing as Nathan’s manager and will do all the talking. Nina walks in on Amy thanking Nathan by giving him a hug. She asks to catch up with her brother, so Amy leaves and Nina asks what is going on between them. Nathan swears it is nothing and he’s not having an affair. Inside, Nelle applies for a job, but Bobbie approaches and screams that hell will have to freeze over before she gets a job here. Nelle realizes Bobbie is connected to the owner and decides to leave, but Bobbie grabs her by the arm and they get into an argument. Nina walks in on them and asks if there is a problem. Bobbie excuses herself to take a call, and Nelle thanks Nina for intervening. Nina questions Nelle about her desire to stay in town and if it has to do with Michael. Nelle doesn’t deny it, so Nina offers her a job as her executive assistant at Crimson. Nelle accepts the job. Joss visits Michael at the Quartermaine estate and vents about their mom potentially forgiving Sonny, which she will never do given what Sonny did to her father. Michael understands, but says she can’t dictate whether their mom forgives him. He also explains the older she gets, the more blow-ups she will have with everyone in their family, but will learn to forgive and move on. Later, Bobbie drops by and tries to convince Michael that Nelle is staying in Port Charles to manipulate him. Michael informs his grandma that it is his mistake to make if she’s using him, and he’ll live with the consequences. Bobbie leaves, and Joss thinks her brother is siding with their mom because he’s doing the same thing by forgiving Nelle. She leaves and calls her friend to arrange a party at Carly’s, which she has to herself. Down in Puerto Rico, Sonny gets a text and relays the news to Carly that the distributor isn’t arriving until late so they’ll need to deal with this in the morning. He offers to get her a room, and have dinner prepared for them. She accuses him of setting this up, but he swears he is innocent and shows him the texts he received. She apologizes, and Sonny invites her to take a walk by the ocean. At their place, Jason returns home with breakfast to find Sam walking around with a large butcher knife. He questions her about it, and she claims to have found it on the coffee table. Jason thinks he must have left it out and not remembered it.

Amy and Nathan meet with the publisher Quinn Danvers (played by Jennifer Bassey) in her room at the Metro Court. Quinn questions Nathan about his history with advice columns, and cuts Amy off when she tries to answer for him. Quinn throws Nathan some hardball questions about his columns, and Amy is shocked when Nathan is able to answer them all. Quinn excuses herself to take a call, and Nathan admits to Amy he did research on her work before the meeting. Amy promises him this charade won’t go on much longer. Quinn returns and hears this and asks what charade she is speaking of. Amy claims she was just speaking of the song and dance of business deals. Quinn lets them know that was her president of her division and she’s been given the green light to sign him, and they need to set up a photo shoot to begin promoting his book.

Back in the bar, Julian advises his old friend to leave Sonny alone and stick with his gig on the West Coast. Garvey refuses because this is payback for what Sonny’s men did to his brother. He asks Julian to partner with him, but Julian refuses. Garvey says he’ll deal with Sonny himself, and he won’t forget Julian’s lack of solidarity. He walks off and Alexis confronts Julian about his conversation and what he plans to do about this guy going after Sonny.

Julian goes to Sam and Jason’s place to warn Jason about the man after Sonny. Julian leaves, and Jason thinks he should call Sonny to warn him.

Charlotte asks Lulu why a policeman is here about her Papa.

Spencer asks Laura what will happen to Wyndemere when Valentin goes to prison.

Nelle tells Nina that she thinks it is best if she remains in Charlotte’s life.

Something spooks Sonny and Carly down in Puerto Rico

GH Recap: Sam lashes out at Jason as...