Friday June 16, 2017: Kevin asks Laura a question, Hayden worries about being a mom, and Nathan offers to help Amy. 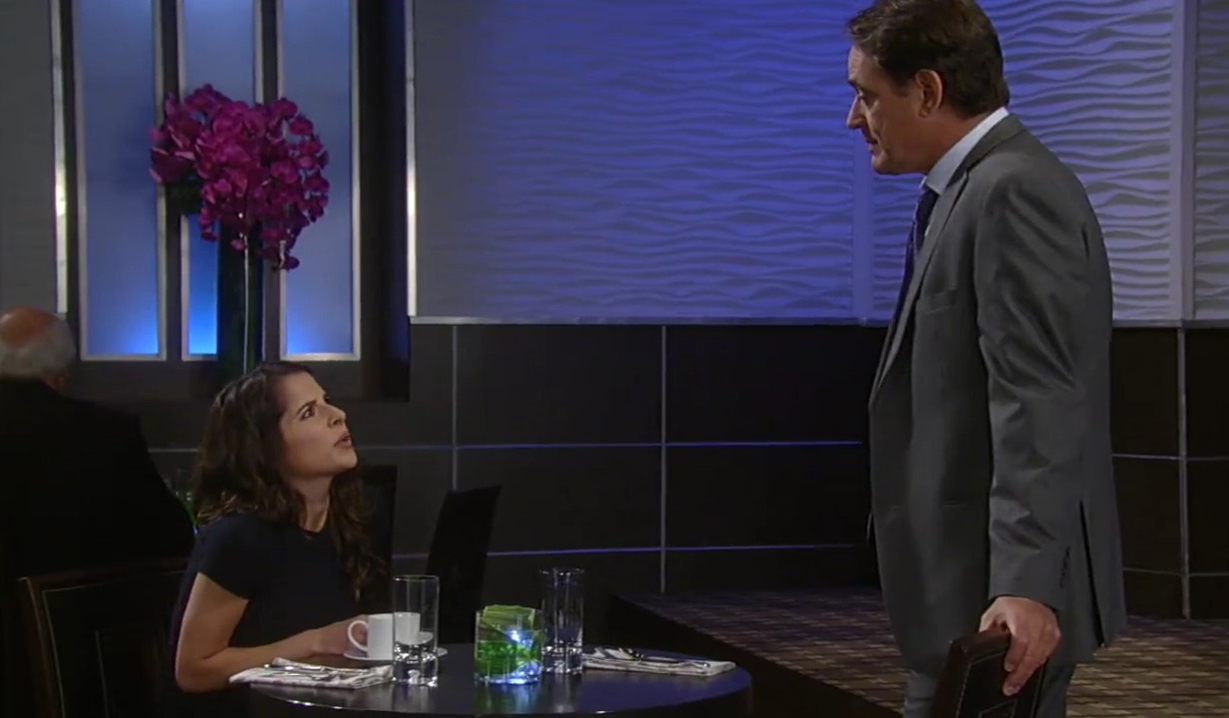 Kevin runs into Sam at the Metro Court. Jason is late for his date with her and she has a weird feeling. She still can’t wrap her head around what happened in Jason’s two missing years. Although he’s the same as always, she wonders if something is missing. They discuss how stubborn he is. He gets a text from the hospital about his appointments being re-scheduled. Sam runs off.

In an examining room at the hospital, Liz assures Jake that everything will be okay. Hayden runs past them and hides. A cop tells Liz to lock the door. Hayden comes back out and, after a little prodding from her sister, admits she’s pregnant. It’s been a rocky road but she’s getting used to it. She asks Liz how she dealt with losing Jake and they discuss parenting. Liz assures her that if she wants a kid, that’s all that really matters. On the roof, Jason fights with Costa and demands to know who he works for. They throw each other around until Sam arrives with some cops to break it up. Jason explains what happened and they take Costa away. Jason tells Sam that whatever Helena did to him, she did to Costa too. They go back inside and fill Liz in on the roof action. Sam gets upset and has to sit down. When she looks at Jason, she hallucinates that he’s covered in blood. Her husband spots her cringing into a corner and asks if she’s okay. She’s not. Meanwhile, Hayden impresses Jake with her capacity to use a vending machine.

At Kelly’s, Nathan tells Amy that he wants to help her with her brother. She claims she can’t talk about that and then proceeds to go on and on about how great her brother is. He used to give her advice and sign it Man Landers. But he hasn’t been the same since he got back from Afghanistan after being injured and put in a group home. She started the Man Landers thing for fun but then her mother died and she needed money to help pay her brother’s bills. Before she can leave, she accidentally drops some paperwork. Nathan picks it up and sees her brother’s many medical bills. She makes him swear to keep this quiet. Nathan offers to play Man Landers for the publishers and help her out. Thrilled, she throws her arms around him.

More: Meet the stars at the Passions fan festival

At the Falconeri’s, Laura admits to Lulu that she’s feeling in the way. Lulu says that’s nonsense. Spencer storms in to declare that the living arrangements are all wrong. He blames Charlotte. The little girl enters with Dante and Rocco. Charlotte tells Lulu that Spencer hasn’t been nice. Spencer complains that she and her father have stolen his life and house. He accuses them of forgetting about Nikolas. Laura takes him aside and tells him that Charlotte is not to blame for what her father does. Once he’s calmed down, they join everyone else to work on a puzzle. He destroys it. Dante lectures him. Kevin drops by and asks Laura if she wants to go out. Once they leave, Lulu threatens to get out her brownie mix. Charlotte isn’t in the mood. The adults assure her that Spencer is just a bit ‘out there’. She knows but misses Valentin and Nina and worries that might upset them. Dante and Lulu assure her that they love her. They finish a puzzle.

Laura and Kevin take Spencer to the park. The kid goes off to get a pretzel. She’s not sure what to do about him and explains how tense things are getting at Lulu’s. Kevin suggests that she move in with him. She’s reluctant. He explains that waking up with her every morning would be great. Laura’s not sure they’ve been dating long enough but he is. His feelings for her aren’t about to change. He’ll be happy as long as she’s with him, even if Spencer comes along. She agrees.

Ned and Olivia have a choice to make.

Griffin and Sonny have a chat.

GH Recap: Sam lashes out at Jason as...