Wednesday June 14, 2017: Jason gets a lead on Helena's henchman, the henchman stalks Jake, Carly and Sonny come to an understanding, and Sam senses danger. 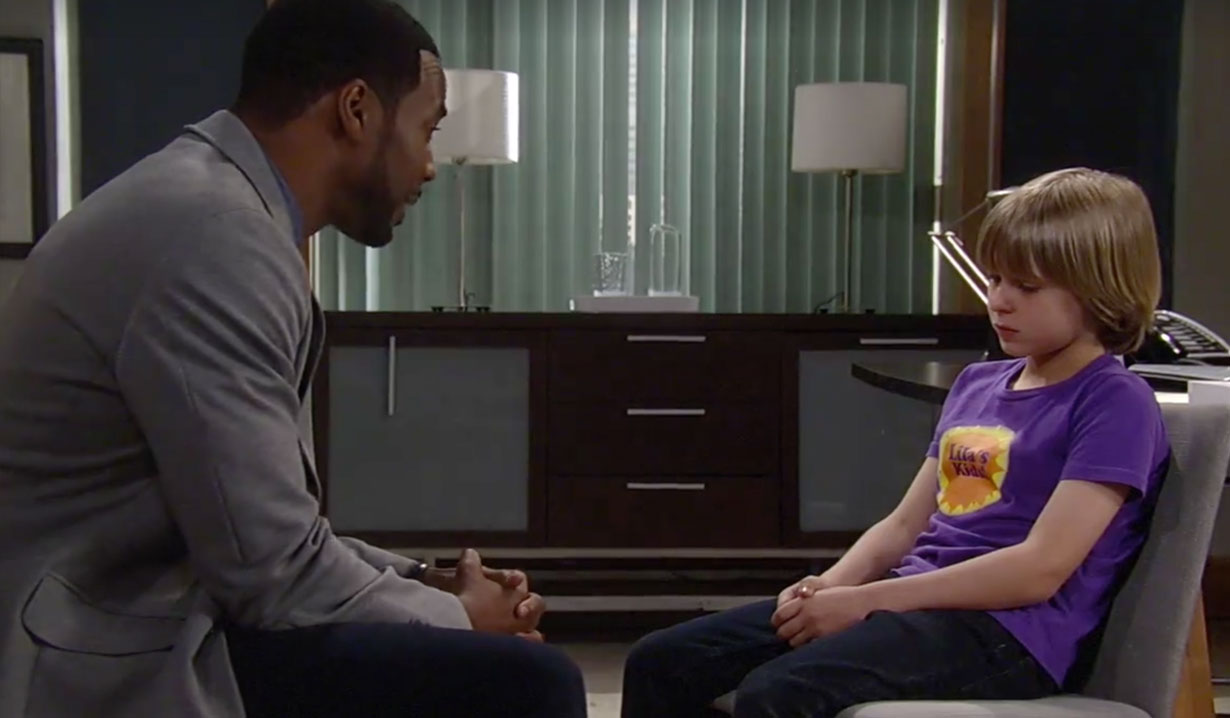 At their place, Sam finds Jason trying to track down who sent Jake the Chimera in the magic kit and begs him to let it go. Jason can’t and asks her what is going on. Sam claims she’s just tired and needs some sleep. He tells her to take a nap while he goes to follow the trail of the package delivery.

Liz takes Jake to see Andre at GH for a session. Andre does word association with Jake and brings up Cassadine Island, which triggers him. Andre promises Jake that he is not the little boy stuck on that island with Helena anymore, and he is home and safe with his family.

More: Join the stars of General Hospital at the 2017 fan club weekend

Nathan meets Nina at Kelly’s for lunch. A dress she ordered for Charlotte awhile back arrived, and she’s unsure if she should give it to her. She also tells Nathan that she filed for divorce from Valentin, and she has to move on. Nina leaves, and Amy approaches Nathan and asks for a favor. She asks his help saving her book deal by meeting the publishers. He refuses, and Amy thanks him for nothing and storms off. Nathan goes after her and finds Amy crying on the phone to someone about not giving up hope and that she will get the money somehow.

Anna drops by Lulu’s place to talk to her about Valentin and give her the goodbye video that he taped for Charlotte. Lulu doesn’t want to show it to her daughter because she’s in a good place. The two argue over it as Nina arrives with the dress for Charlotte. Lulu has to go pick up Charlotte from camp and suggests Nina wait here and give the dress to her in person. While Lulu is gone, Nina and Anna discuss Valentin, what will happen to him, and Nina reveals she’s divorcing him. Anna knows things aren’t black and white with Valentin, and part of him is a good man. Lulu returns with Charlotte, who is thrilled to see Nina. Nina gives the little girl her dress, and breaks down as she tells her that they may not see much of one another anymore because she needs to be here with her mom and her new family. Nina promises her that she’ll always love her, which Charlotte already knows. Anna pushes Lulu about the video, and she relents and tells Charlotte that Anna has something for from her Papa. Anna tells her about the video, which Charlotte feels Nina should watch too because she didn’t get to say goodbye to him either. They watch the video together.

Spinelli arrives in Port Charles and pays a visit to Carly and Sonny at Sonny’s place before leaving to do some work. Carly tells Sonny that she just learned Ava’s been upgraded to stable condition, and worries that Ava will never pay for what she did. Sonny wants to forget about Ava and concentrate on them. He reaches to kiss her, but she pulls away. She can’t shake what Joss said about them repeating the same mistakes. Carly doesn’t want them to keep hurting one another, and she wants to go through with the divorce. She feels it is time to let go. Carly hugs Sonny and walks out.

More: The teen scene in Port Charles and other soaps

Spinelli and Jason meet at a warehouse where Jason fills him in on the Chimera and gives him the delivery receipt for the magic set. Spinelli gets to work hacking and eventually tracks down the delivery man. Jason recognizes him as Helena’s goon from the island.

Liz goes to see Jason at his place, but Sam tells her that he’s out looking for the guy who delivered the package to Jake. Sam starts to panic, hears a voice in her head saying that her family isn’t safe, and has a vision of Liz pulling a gun on her. She snaps out of it and finds Liz holding some forms for Jake to attend camp this summer that she wanted to drop off. Liz asks Sam if she is okay, and Sam says she’s just tired. Liz asks to have Jason call her if he finds out anything and then leaves. Sam tries to calm herself down and take a nap.

Liz returns to GH to pick up Jake. Andre tells Liz that they had a good talk and Jake is doing well. While they talk, Helena’s henchman Costa lurks around the corner.

Griffin tells Sam he may know what is wrong with her.

Olivia begs Julian to just stay out of Leo’s life for good.

Nathan asks Amy if he can help her.

Jason wonders if Helena’s man is still in town.

Jake runs into Helena’s man at the hospital vending machines.