Friday May 5, 2017: Hayden suspects Brad is up to no good, Sonny and Ava try to get Avery into preschool, Michael tries to play peacekeeper, and Alexis and Julian cross paths. 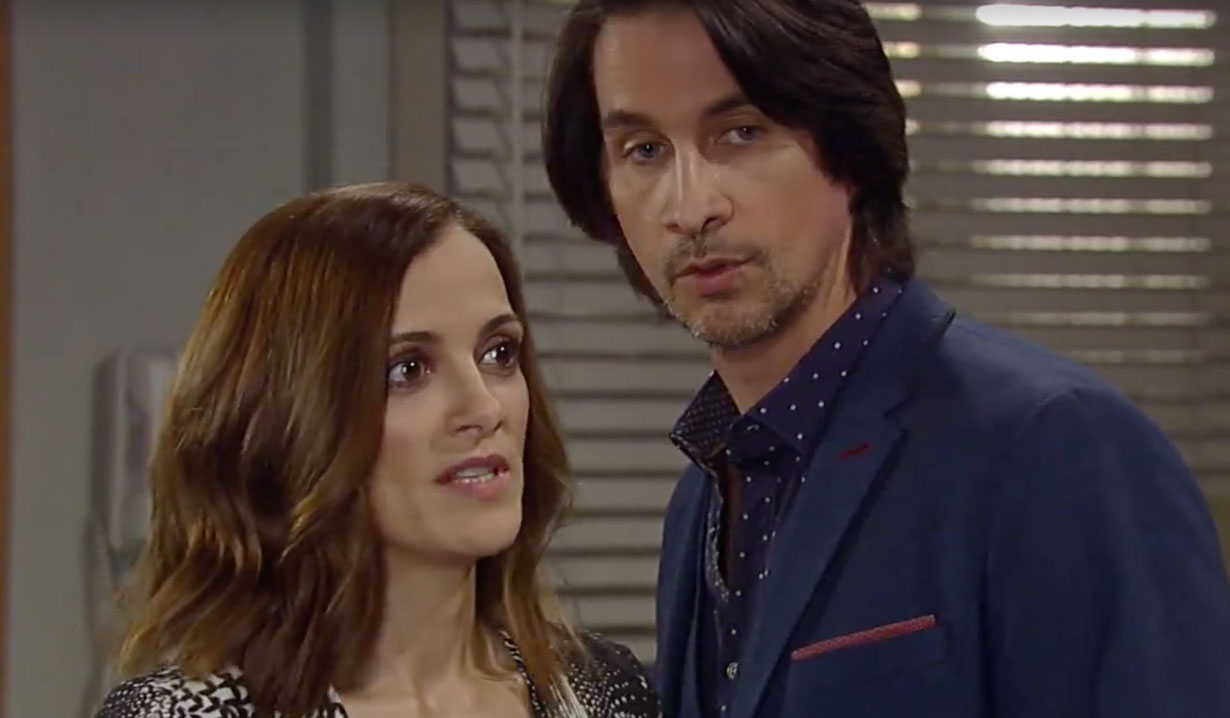 In the interrogation room at the PCPD, Jordan informs Julian that the kidnapping charges against him are being dropped because Alexis has cleared him. Jordan promises that she will make the remaining charges stick. Elsewhere, Alexis arrives and runs into Malcolm O’Hare, one of the bar association members. Alexis asks what her chances of being reinstated are. He informs her given her recent antics with Julian they aren’t good. He leaves, and Alexis spots Julian in the interrogation room. She quickly checks on him, and he thanks her for getting the kidnapping charges against him dropped. However, he won’t let her ruin her life for him. Alexis tells him she only told the truth. Jordan returns to find Alexis with Julian, and she is shocked that Alexis has seemingly lost all her pride and self-respect over Julian.

At GH, Hayden leaves Tracy a message wishing her luck. Brad overhears and is thrilled to learn Tracy won’t be back for a while, so she can’t protect Finn. Hayden tells Brad that Dr. Finn’s recovery is going well, but Brad says not to count on it. He goes off on Finn for being a liar and swindling him out of the profits from the sale of the Blackwood Syndrome cure. Brad guarantees that Finn will go down now that Tracy isn’t here to save him. Obrecht walks up and hears that Tracy is gone and is intrigued. Hayden warns her that she won’t get herself back on the hospital board if that is what she’s thinking. Hayden leaves to meet Finn, and Brad tells Obrecht that something big is about to hit the fan regarding Finn. Finn meets Griffin in his office and learns his second test came back positive. Finn swears he is clean and insists someone is tampering with the results. Hayden walks in and insists Finn is being set up, and has an idea how to catch the person behind it. Later, Griffin, Hayden and Finn go out into the hallway where Brad is still talking to Obrecht. Griffin agrees to give Finn one last chance with a third test. Brad throws a fit, and Obrecht backs him up. Griffin suggests Brad get back to work, but Brad swears they will all see that Finn is an addict and a loser. Later, Griffin, Hayden and Finn reconvene in Griffin’s office. Griffin remarks this isn’t going to end well for someone, either Brad or Finn. Carly has a brief meeting with Martina at the Metro Court. Carly asks what she and Sonny were talking about earlier. Martina tried to get him to settle, but Carly let’s her know that Sonny never admits defeat. Martina leaves to do some work and Michael joins his mother. He asks if she’s really going to go through with taking everything from his father. Carly states he is getting exactly what he deserves. Michael tries to convince her not to wage this war because it will only hurt her the most, but she won’t listen to him. Ava and Sonny meet at the Port Charles Preschool Academy to try and get Avery enrolled. Ava gleefully informs him that she saw him at the Haunted Star last night and suggest he be a little more discreet with his affairs in the future given Carly is out for him. Sonny warns her to stay out of his divorce or she will regret it. The head of the school Jan Richards (played by Keiko Elizabeth) meets with them and regretfully tells them they don’t have room for Avery. Ava asks how much would it cost to get a spot open for Avery, but Mrs. Richards insists this isn’t about money. Sonny believes this is about the two of them and their reputations, soe he pours on the charm and tells her not to believe what she hears. Mrs. Richards changes her tune and feels she may be able to find one extra spot for Avery. After the meeting, Ava compliments Sonny on a job well done. She hopes this proves they can work together for Avery’s sake. Sonny must leave, so Ava wishes him luck with his divorce.

Michael drops by the Corinthos place to check on his dad. He asks Sonny to back off his mom because she will push him the more he pushes her. Sonny refuses because she is trying to take his businesses.

Back at the Metro Court, Martina returns and has another quick conference with Carly. Ava arrives and runs into Martina and recognizes her as the woman Sonny was with last night. She figures out Martina is Carly’s lawyer.

Liz tells Sam that if Helena did something to Jake then the clues will be on the island.

Michael is out with Avery and runs into Nelle and Charlotte.

Jason comes face to face with a woman from his past.

Martina can’t figure out if Carly is divorcing Sonny or defending him.

Ava tells Sonny that he won’t regret this. He informs her that she might.

The Masked Singer: Every Clue So Far About Season 4's Super Six