Thursday May 4, 2017: Tracy says goodbye to her family, Amy fumes over Maxie bailing on helping out with the Nurses' Ball, and Sonny and Carly battle over assets. 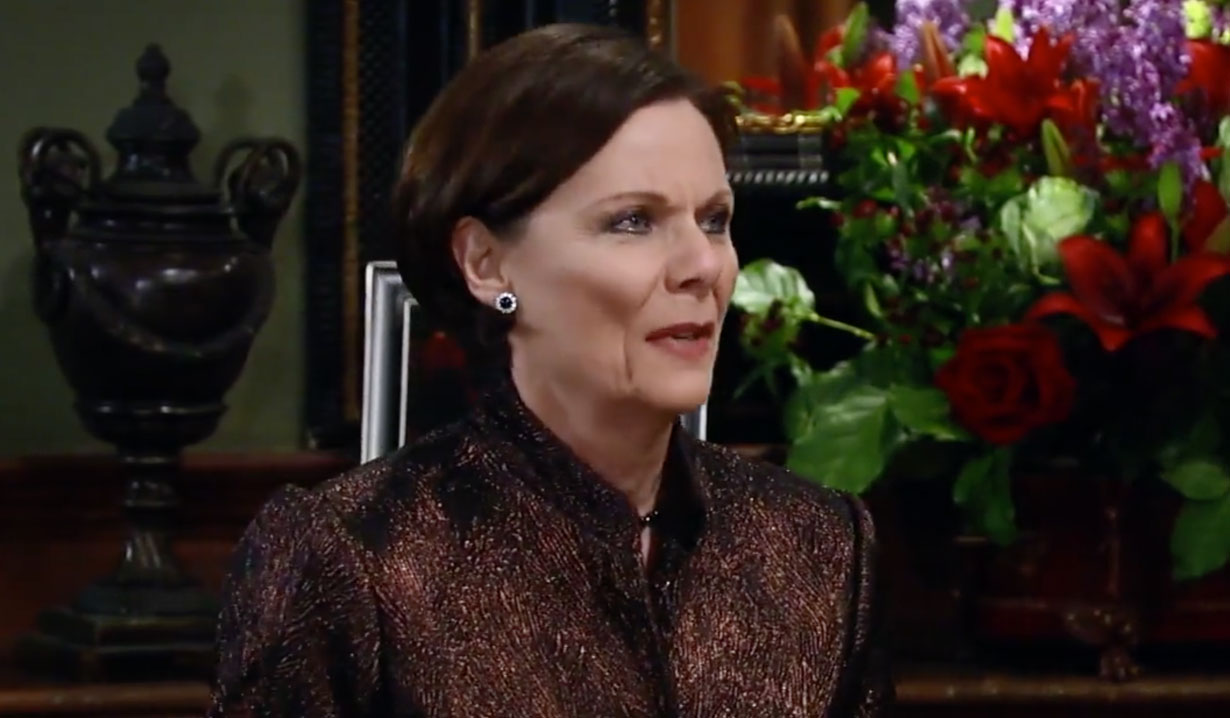 At the Quartermaine mansion, Tracy tells her family and friends that she loves them all, but it is time for her to leave Port Charles. She has decided to sell the painting and will use the funds to travel the world and do something worthwhile. The doorbell chimes and Tracy announces that the food is here. Pizzas are delivered to honor the usual Quartermaine Thanksgiving feast. Ned and Dillon wonder if they can talk their mother out of this, but she insists her mind is made up. Dillon can’t believe he’s finally returned to settle down and now his mother is taking off on her own adventures. Tracy hugs Dillon and says that his huge heart makes him the strongest of all the Quartermaines.

Nathan returns home to a cleaned apartment, but no Maxie. Later, Amy drops by wondering where Maxie is because she was supposed to be helping with the Nurses’ Ball. Nathan informs her that Maxie is in Portland working. Amy is furious and states that Maxie is still the same self-centered witch she always was.

Carly’s lawyer arrives to court and it is Martina Morales, Sonny’s fling from the previous night. Martina greets Diane and Sonny, and Diane suggest they get to work dividing up the marital assets. Martina sides with Carly that Sonny signed over all his assets of his own free will, and should they try to get them back, she’ll introduce his various questionable off-shore holdings to the court. Martina reminds him that failing to report one’s complete possessions is a felony.

Tracy shares a goodbye with Michael at the Quartermaine mansion, and warns him there will be hell to pay if ELQ tanks. She turns to her eldest son and cries that Ned is her rock and always will be. Monica lets Tracy know the jet is ready for her and her car is arriving shortly. Monica tears up as she tells Tracy that somewhere along the line she’s gone from being her sister-in-law to her sister. Tracy’s car arrives, so she says her final goodbyes. She tells Lulu and Laura to take care of one another, and suggests to Hayden and Finn they stop wasting time because they taught her time is limited. She reminds Michael to make sure that ELQ keeps turning a profit, and wants to be invited to one of Dillion’s premieres sooner rather than later. Tracy turns to Olivia and expresses how grateful she is that she will be taking care of Ned. Monica promises to leave their house, not her house, as she left it with no major changes in decor. Tracy says she cherishes them all and runs out the door. She quickly returns for a group hug before leaving again.

In court, Carly tells Martina that she doesn’t want to bring the offshore holdings into this. However, when Sonny refuses to give up what is his, Carly announces that she’ll see him in court. Carly and Diane walk out of the room. Once alone, Sonny asks Martina what game she is playing. Martina swears she had no idea who he was. Sonny feels they need to come clean with Carly and Diane, but Martina refuses because she could be disbarred for this. She suggests they act like they just met and never speak of what happened last night. Sonny agrees. Meanwhile, Diane approaches Carly in the hall as a friend and begs Carly to compromise. Carly refuses to play ball, so Diane warns her that in the end both she and Sonny will probably regret what is about to happen more than anyone else.

At his place, Nathan wonders to Amy if there is still room for him in Maxie’s life anymore given her kid and dream job are all out in Portland. Amy thinks his marriage can survive if he loves Maxie enough. Nathan realizes she’s right and lets her know she’s good at this advice thing. He offers to help Amy with the Nurses’ Ball, and she takes him up on his offer. Amy leaves, and in the hall pulls out a photo of Maxie and Nathan that she swiped. She tears it in half and crumples up Maxie’s half.

Tracy meets with an art dealer and learns a private collector has already offered 60 million for the painting. The paperwork has been drawn up so she signs it. Tracy takes a moment to say goodbye to the painting, and vows to live the rest of her life on her own terms. Flashbacks of Tracy over the years are shown, including the good times and the bad with Monica, Luke and her sons.

Later, Tracy enters a little café somewhere in Europe where she finds Luke sitting at a table. They look at one another.

Julian tells Alexis that he doesn’t think telling the truth will set either of them free.

Hayden asks if there is a test that could show Finn was set up.

Brad gloats to Obrecht that something big is about to hit the fan about Doctor Finn.

Michel asks Carly if she really is going to go through with her plan.

Sonny warns Ava to stay out of his divorce or she’ll regret it.

Stevie Nicks on Her New Concert Film, the ‘Crazy’ Resurgence of ‘Dreams’ and Staying in Touch With the Spirits of Prince and Tom Petty