GH Recap: Tracy receives a shock regarding her father’s painting

Tuesday April 4, 2017: Tracy reads a letter from her father, Carly tells Jax about Sonny and Nelle, Jake meets with Andre, and Amy reconnects with an old friend. 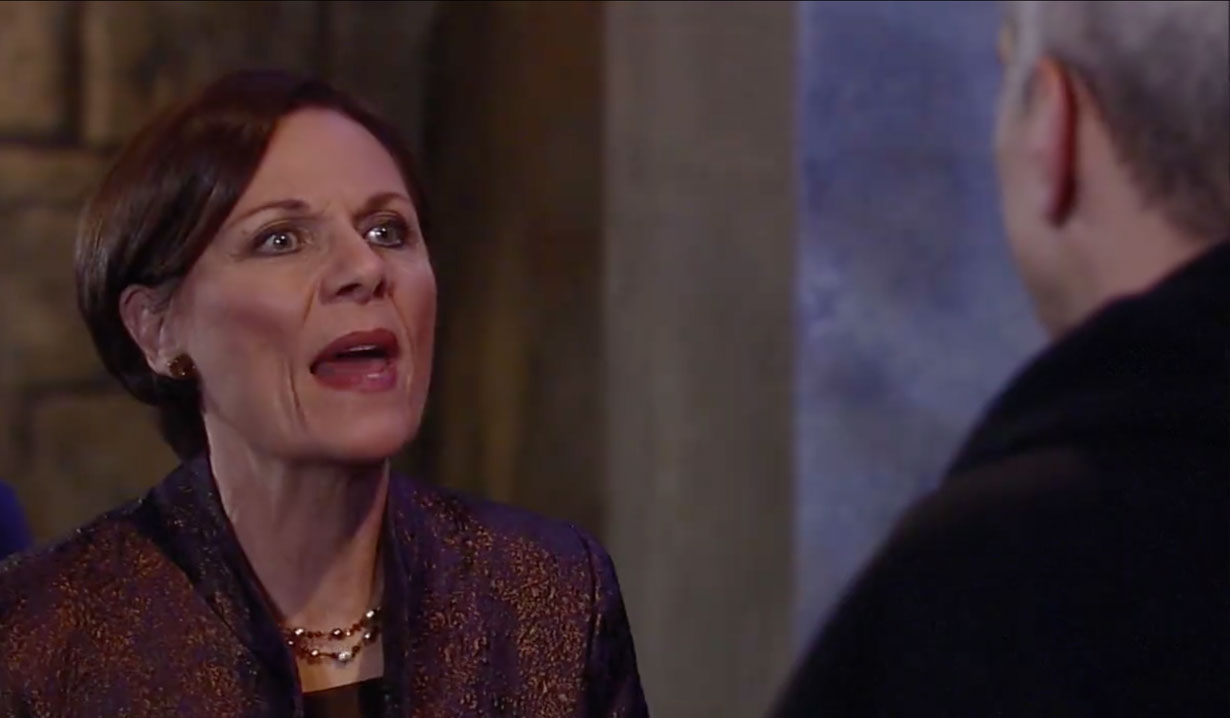 Carly returns home and is shocked to fine Jax there. He explains his mother died and that he came back to tell Joss. Carly fills him in on her marriage problems, including Nelle’s part in it. Jax admits this is his fault because he paid Frank for Nelle’s kidney.

In Turkey, The Abbott appears to answer Tracy’s questions about the painting that looks like her. He tells them years ago JL Holt came here looking for asylum and sold his painting collections to help their monastery. However, he refused to sell this painting because it reminded him of his daughter. He also left a note behind for her because he never knew if he’d see her again. Tracy reads the letter in which Edward expresses his regrets for their distance, and cutting her out of his will. He found the painting and made it his inheritance to her to prove that he loves her and forgives her. Tracy wants to take the painting home, but the Abbott tells her she can’t because they have a buyer and the money will fund their work here for years to come. Laura thinks it is for a good cause, but Tracy blurts out, “Hell no!” She refuses to give up the painting.

Back in Port Charles, Hayden is babysitting Finn at the Metro Court when Curtis arrives with some food and liquids. Hayden leaves to check in with work. Finn worries to Curtis that he must have done something to scare Hayden, because she’s being distant. Curtis realizes Finn doesn’t remember the events of the night before.

At the hospital, Liz meets with Andre about Jake. Meanwhile, Jake finds Franco picking up his paycheck and asks him when they can work on their timeline drawing. Franco makes excuses that he’s too busy right now. At their place, Jason leaves to make Jake’s therapy appointment, and Sam continues to look over the evidence pertaining to Julian possibly still being alive. Nathan drops by to tell her that someone used Julian’s credit card to buy a one-way bus ticket to Los Angeles. He needs to talk to Alexis to find out if Julian ever spoke about plans to skip town, and asks Sam to pass on the message. He leaves, and Sam mumbles that she won’t let Nathan question her mom now and open old wounds. Amy meets Dillon at Kelly’s to work on their high school reunion. Amy is tickled that Dillon remembers her, they were in film club together. Kiki joins them, and Amy is stunned to learn Dillon has a girlfriend. She makes an excuse for having to leave, so Dillon suggests she text him so they can discuss the plans more. Dillon tells her he’s glad they could reconnect. Amy leaves in tears. Outside a friend calls her, and Amy tells her that Dillon was amazing, but he has a girlfriend who is all wrong for him. Back in Kelly’s, Kiki tells Dillon she’s working to become a certified nurse’s aide. Suddenly, Franco bursts in on them to talk to Kiki about his desire to help Jake. She tells him that he needs to respect that Jake isn’t his son. Back at GH, Andre meets Jake, who would rather talk to Franco. Liz and Jason tell him it’s better he talks to Andre right now. Jake reluctantly talks with him, and they go into his office and play with a box of action figures. Jake picks out the scarecrow and witch from “The Wizard of Oz” and explains to Andre that they are friends. After the appointment, Andre tells Liz and Jason it will take time to get Jake to open-up. He suggests Liz and Jason make peace with one another, because it will help Jake given he senses their tension. Meanwhile, Jake calls Franco and asks him to help finish the drawing. Franco suggests he ask his mom and dad to help him. Elsewhere, Hayden runs into Liz. The two talk about Finn becoming physical with her, and verbally nasty. Liz tells her not to take it personally, and that it is the addict talking. She also warns Hayden that Finn’s journey is far from over, and it is okay for Hayden to put herself first.

Hayden returns to Finn’s apartment and finds Finn alone. Finn tells her that Curtis told him what happened last night. He apologizes. Hayden knows Finn has a long road ahead, but she can’t walk it with him. She doesn’t think he fully trusts her given what he said to her last night, and suggests he check himself into a center. She walks out on Finn.

Curtis comes to Sam and Jason’s and Sam asks him to help her track down who used Julian’s credit card.

Valentin asks Anna why she is here.

Scott tells Ava there is no way she will get into the evidence room.

Carly asks Jax why he didn’t tell her.

Joss admits to Michael that part of her still likes Nelle.

Sonny suggests to Nelle that she be more careful.

GH Recap: Scott goes against his...

Listen: Sara Gilbert on Her Dream Guest Star on ‘The Conners’ and Missing ‘The Talk’

Academy Museum Adds Ryan Murphy, Five Others To Board Of Trustees