Monday April 3, 2017: Sam and Jason have a request for Carly and Sonny, Tracy and Laura arrive in Turkey, and Ned and Olivia announce their engagement. 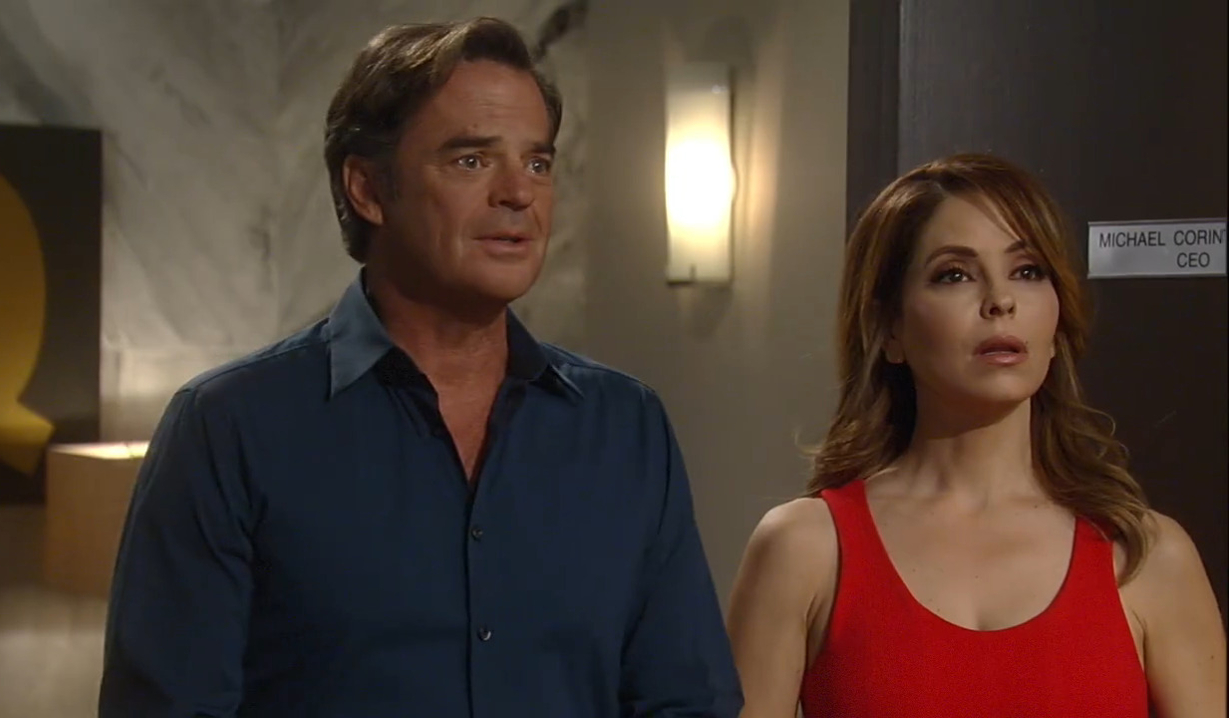 When Michael walks into his office at ELQ, he finds Lord Larry rifling through his papers. He claims he’s looking for Tracy. Ned and Olivia arrive and the barbs and threats begin. The Ashtons insist on waiting around for Tracy. Larry gets smarmy with Olivia, who announces she’s engaged to Ned. The congrats begin and she leaves with Michael to track down Tracy. Larry’s not sure if a toast or a eulogy is in order. As the men discuss the pitfalls of marriage, Olivia returns and eavesdrops as Ned insists that he’s changed and is completely honest with his fiancée. She’s an amazing woman and makes him want to be better. Larry congratulates him and they hug. Michael returns with booze and glasses. The four of them toast to Olivia and Michael warns her that living with the Quartermaines can be difficult. Micheal’s assistant calls to say Tracy took the ELQ jet to Turkey. Larry spits up his champagne.

Tracy and Laura arrive at a monastery in Turkey to get her painting. Some monks walk in and aren’t happy to see them. Laura insists on doing the talking and manages to get them a room. They’re instructed to stay in it. Once alone, Laura tells Tracy they can explore later. She recalls all the great thinks Edward used to say about his daughter. Tracy still finds it hard to accept that he loved her. They hug. Laura suggests they forget all of this and go home. When they open the door, they hear a woman crying. They chase some monks down the hall. Tracy announces she’s Edward’s daughter and tears the covering from the painting they are carrying. The woman in the painting looks just like her.

Carly is at home with Joss, who starts grilling her about Sonny. Carly can’t turn off her feelings. Her daughter thinks that’s unhealthy and urges her to get a divorce. Carly explains that divorces are lengthy and painful processes and she’s not ready yet.

At home, Sam tells Jason he’s a good father for getting a shrink’s appointment for his son. Sonny arrives and Sam leaves the men alone. Jason asks Sonny to be Scout’s godfather… and they’re asking Carly to be the godmother. Corinthos guesses this is a scheme to get them back together. Carly bursts in. Before she can exit after spotting Sonny, Jason asks her to be the godmother. She’s thrilled. When she heads out, Sonny follows her. She doesn’t want to talk anymore. They said enough last night. He walks off.

More: Fresh spoilers for all of the soaps Alexis is at Kelly’s having coffee but feels like someone is watching her. She’s about to exit when Jax pops up. They sit down and discuss her problems until Sam interrupts. He congratulates her on the baby and takes off. Alexis tells her daughter that she can’t shake the feeling that Julian is still around. Sam thinks that’s because they haven’t found a body yet but she plans to take care of that. Later, as Alexis leaves, a figure in black watches.

Jax drops by Carly’s to see Joss. She tells him how bad things are between her mom and Sonny. He sits her down and tells her that Lady Jane died last night. They weep together and he talks about what an amazing life she had. She left a letter for Joss, but she isn’t ready to read it yet.

Sam returns home. Jason says he’s not sure that Sonny and Carly have a marriage anymore. She shows him the image she pulled from the surveillance footage. The figure is Julian’s height and build. A call comes in to notify her that someone just used Jerome’s credit card.

As Sonny walks the street, he calls Diane and asks her to clear her schedule

Curtis gets a job from Sam.

GH Recap: Jason gets a lead from...