GH Recap: Valentin stuns Anna with information about their past 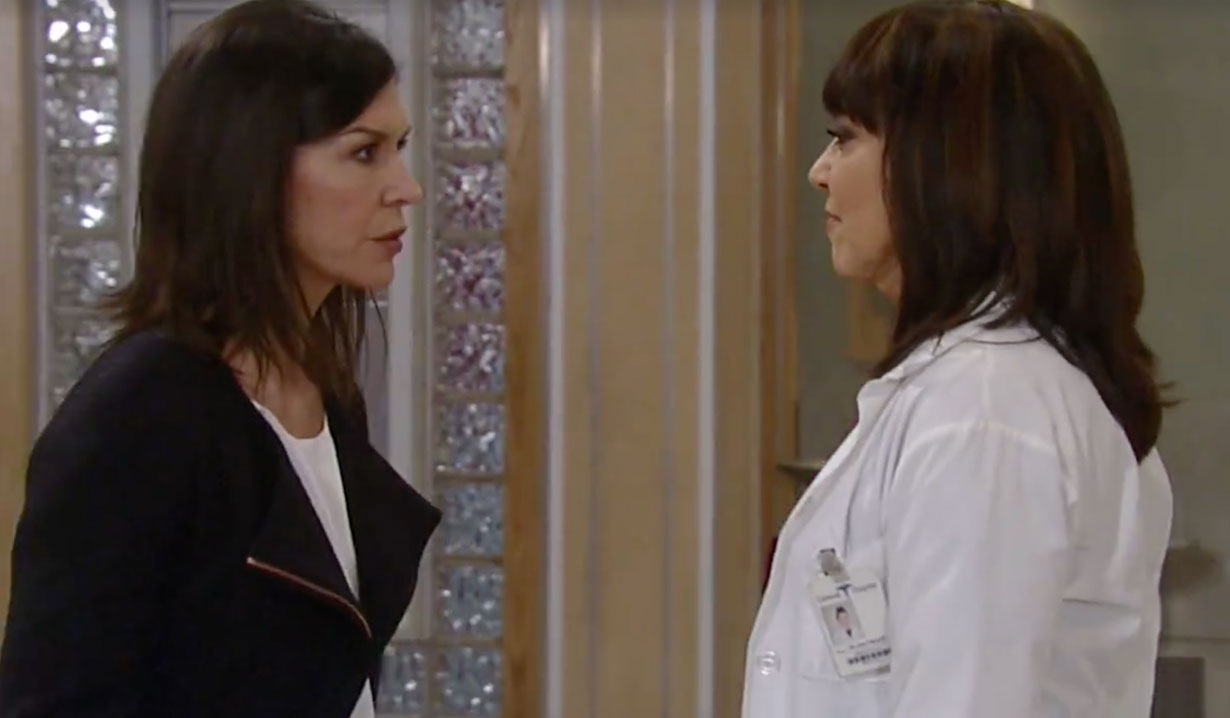 At the hospital, Obrecht hands a file to Anna on Valentin that Faison procured. Anna reads it and is stunned. She goes to Andre and informs him that Valentin was accused of selling secrets to the DBX. Valentin claimed that Anna asked him for that intel, but he soon disappeared and the WSB thought he was lying to cover his tracks. Andre thinks he must have been lying because Anna wouldn’t sell secrets, but she says she did. Anna explains she was young and naive, and she sold intel to the DBX. It forced her into hiding for years and she couldn’t even raise her own child. Anna doesn’t remember selling Valentin out, and wonders if someone has been lying to both of them.

Ned has drinks with Tracy at the Metro Court and notices her mind is elsewhere. He realizes this is about his father’s reappearance. He warns Tracy not to trust Larry. Tracy goes up to Larry’s room to find out what he knows. Larry explains he was recently in Turkey where he visited an auction house. There he saw a painting by a famous Renaissance painter for sale, and he recognized who owned it, her father. Back in the bar, Ned meets up with Olivia to discuss their movie plans for the night. Olivia has her own proposal for Ned and asks him to adopt Leo. Ned refuses.

A drunk Alexis stumbles to her door thinking Julian is there, but it is no one. She returns to her vodka and thinks if Julian is still alive he will come stop her. Suddenly there is a knock at the door. It is Valentin, who has come to pay his condolences about Julian’s death. She wonders why he suddenly wants to be her brother. Valentin claims he came to Port Charles to reconnect with his family. He would like Charlotte to meet her family, especially Danny who is about her age. Alexis suggests Charlotte get to know her actual brother Rocco first. Valentin leaves, and Alexis continues to drink. She gets another visitor at her door, and this time it’s Julian. She shuts the door on him, but he starts appearing all over her house. Everywhere she turns, he is there, but he points out he’s not here, so her own mind is playing tricks on her. He eventually points out he’s not really here, and it’s her own mind trying to stop what she’s doing. He says he will always be with her in her heart, and they lean in to kiss. Julian disappears. Alexis quickly pours the rest of the vodka out.

At the Corinthos place, Lucy tells Sonny and Carly that she must speak to them about their son. Ava suddenly bursts in to talk about Avery’s pre-schooling. Lucy tells her she was just about to discuss their son with them. Ava thinks if she’s here about Michael’s weak donation to the Nurse’s Ball that the Jerome Gallery will make up the difference. Lucy backs down, and she and Ava leave. Carly and Sonny pick up arguing. Sonny can’t keep apologizing for what he did, and tells her that if she won’t give them a chance then their marriage is done. Carly refuses to take the blame and informs him their marriage is over because of his secrets and lies. She’s walking out and not coming back.

Ava and Lucy arrive at the Metro Court for drinks. Ava thanks Lucy for keeping silent and promises a fat check to the Nurses’ Ball. Lucy squeezes Ava for a lot more money than Ava planned. Ava says she’ll have to move things around to get the cash. Elsewhere, Laura meets with Lulu and tells her that Nelle may be their weapon against Valentin. Laura suggests Lulu befriend Nelle. Meanwhile, Ned tells Olivia that she loves Leo, but he can’t adopt him if she doesn’t want to marry him. Oliva wants to spend her life with him, but fears a marriage license is a guarantee to doom them. Ned tells her tonight he will propose again, and this time whatever she answers will be her final answer. Back in Larry’s room, Larry reminds Tracy that Edward had to disappear for a time in the late eighties due to legal troubles. During that time, Edward bought the painting under the alias JL Holt. The auction house believed JL Holt was dead and had no heirs, so he is offering to return it to Tracy for a finder’s fee. Tracy thinks he’s conning her and walks out. Back in the bar, Tracy spots Ava and buddies up to her to find the painting. Ava agrees to help Tracy, for a price.

Just in: Brooklyn Decker from Grace and Frankie appears on Harry

Anna arrives at Wyndemere and confronts Valentin with what she knows. Anna believes someone is playing them both because she never ordered him to provide her with intel. Valentin says she did, right after they had sex.

Dante asks Nathan, “What does that mean for you?”

Nurse Amy is excited to get her chance to shine.

Jordan has dinner with Curtis and congratulates Officer Ashford.

Nina tells Griffin that Anna is after her husband.

Anna begs Valentin to believe her.

Ned tells Olivia tonight is about them.

Ava screams and tells Tracy she’s got it!

GH Recap: Alexis drinks too much and...