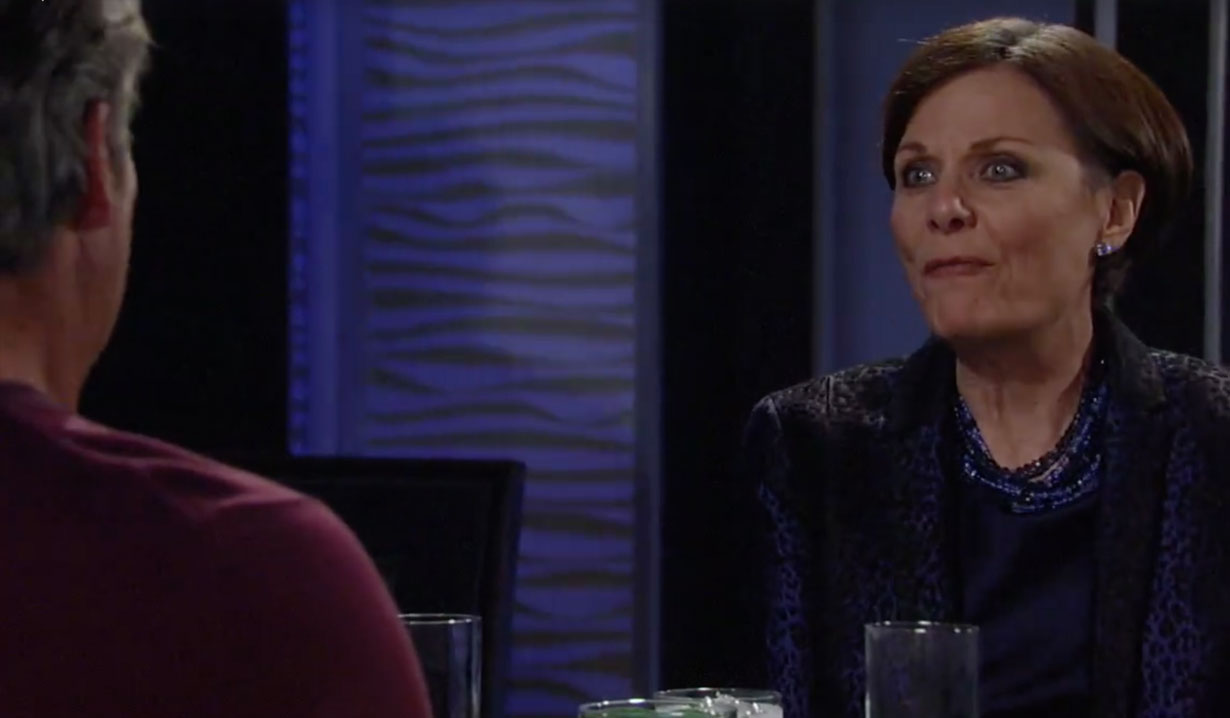 Olivia Jerome is back at the PCPD and waiting transfer to Darkham Asylum. Jordan taunts her that she will be there forever because there is no curing her. Jordan lets her know if she does manage to fool the doctors into releasing her that they have enough evidence to bring her up on many charges. She also vows to find out who was helping Olivia in China for all these years. Jordan storms out and runs into Curtis. She fills him in on Olivia being transferred to Darkham. Curtis decides to leave her to her work, but she stops him and thanks him for his help. She also admits she was wrong about Sonny.

Hayden finds Roxy in the hallway outside of Finn’s room at the Metro Court. When she goes in she finds him huddled on the couch suffering withdrawals. He is confused and out of it, so she gets him into the shower. The shower wakes Finn up and helps him become more lucid. He thanks her for coming. Hayden offers to get him into any rehab facility he wants, but he refuses because he is afraid it will ruin his reputation. He wants to do this on his own, with her help. She doesn’t like the idea, but agrees to help him. Finn warns her it will get worse. She asks what she needs to do. He tells her to tie him to a chair and hands her a role of duct tape. Down in the restaurant, Tracy is in a mood when Ned arrives to join her for dinner. He asks what is wrong, but she’d rather talk about him and Olivia Falconeri. Tracy is stunned to learn Olivia turned down his proposal, because it is an honor to join their ranks. Larry Ashton walks up and says he couldn’t agree more. He joins them, and Tracy asks why he is here. Larry tells her that an unexpected windfall has landed in his lap, and a large sum of money could be hers. Tracy calls him a liar, but he says this is about what her father wanted. Larry goes up to his room and tells her to call him when she’s ready to talk. Ned warns Tracy not to fall for Larry’s games.

Liz comes home from work where Franco pampers her with candles, wine and a footbath. She asks how things went with Jake earlier. Franco shows her the drawing Jake made, and the blank line he drew symbolizing his years with Helena. Liz worries, but Franco thinks things will be okay because Jake is doing well. Liz asks Franco to stay the night, and they head up to the bedroom. After they have sex, Liz asks Franco to move in with her and the boys. He accepts.

Jason and Sam bring Scout home. Sonny drops by to see them, and to bring them up to speed on Olivia being send to Darkham. Scout wakes up and is introduced to Sonny, who holds the baby for a bit before he decides to head out. Sam asks Jason why Sonny seems so different. Jason fills her in on Sonny sleeping with Nelle. Danny wakes up and comes to meet his sister.

Sonny arrives at the station and interrupts a moment between Jordan and Curtis. He wants to give Olivia a goodbye message before she’s hauled off. Jordan tells Curtis they should go get a cup of coffee, which allows Sonny to sneak in and see Olivia. He tells Olivia he has the power to make her pay for murdering his son. Olivia tries to appeal to him and says she knows he’s done things he regrets when in a manic episode. He tells her to shut up, and that he will make sure she dies in Darkham before she can get out. Sonny gleefully says the last sound she will hear is Morgan’s name, and she will know the killer was sent by him. Meanwhile, Jordan talks to Curtis about giving him a job with the PCPD. She suggests they discuss it over dinner. He accepts her invitation. Later, the guards from Darkham arrive to take Olivia away. Olivia panics and wonders if the men were sent by Sonny to kill her. They drag her off as she pleads for help.

Molly asks her mother to listen to them.

Liz and Franco discuss Jake’s drawing and suggests they bring Jason in on this.

Jason tells Curtis if he starts wearing a badge then they can’t work together.

Carly is furious with Sonny for him wanting to get over what he did.

Finn begs Hayden to untie him and let him go.