GH Recap: Anna turns to a shocking person for help

Tuesday March 21, 2017: Tracy tries to get through to Finn, Liz offers Hayden advice, Valentin and Anna feud, and Nina gives Nelle a job. 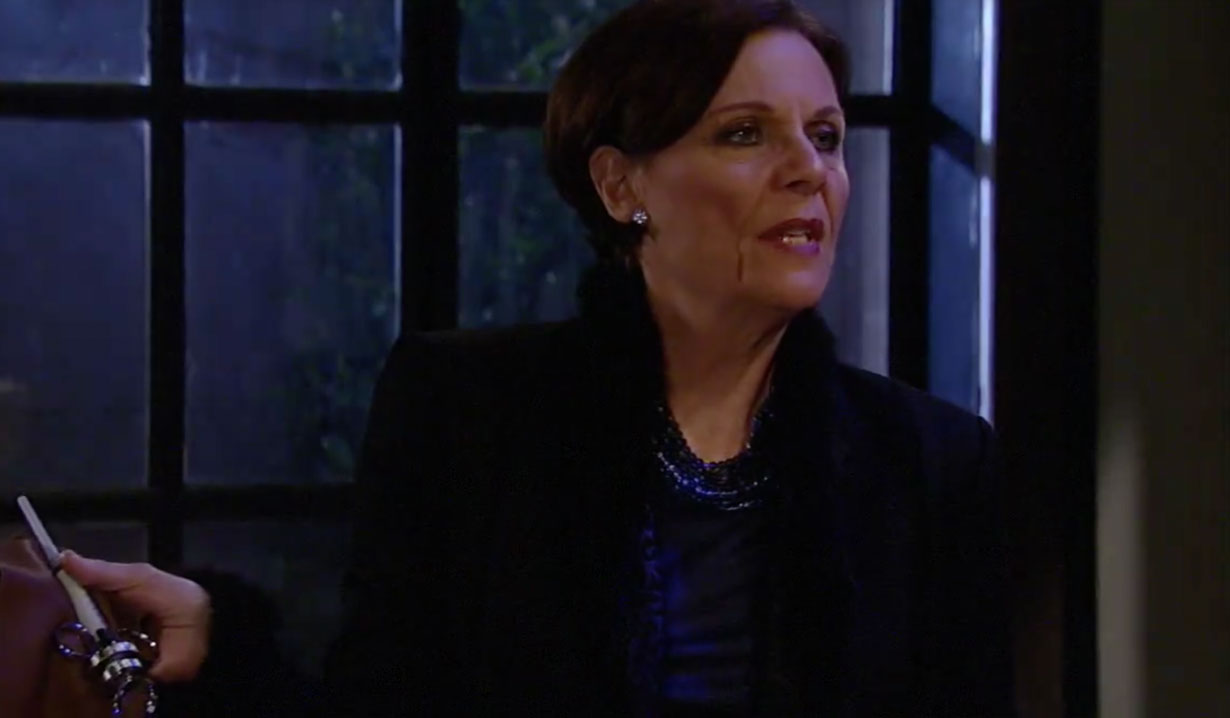 At the hospital, Obrecht is back to doing rounds because of Dr. Finn’s leave of absence. Hayden walks up and Obrecht grills her about what is behind Finn’s hasty departure.

Tracy can’t find Finn in his room at the Metro Court and calls security right as he walks in with a bottle of booze. She confronts him with his syringe and asks how much he’s shot up tonight. Down in the bar, Bobbie meets up with Carly and they talk about her relationship issues with Sonny. Up in the Crimson offices, Nelle rattles off her qualifications to Nina for the nanny position.

Michael meets with Dante at Kelly’s where he learns about the Olivia Jerome situation. Michael hopes his family can heal now, though Nelle hasn’t made it easy.

At Anna’s place, Valentin threatens to remove Anna from his life for good if she doesn’t leave the past in the past but Anna refuses to stop digging until she knows what happened between them.

(“General Hospital” was interrupted for local news at 3:06 PM EST and returned at 3:26 PM EST)

Hayden retreats to her office where Liz checks on her. Hayden opens up to Liz about Finn’s problems, and how he keeps pushing her away. Liz speaks from experience and says she could never get through to Lucky, and it was his father who did. Liz tells her sometimes it’s the person you’d never expect that has the biggest impact on an addict.

More: Lisa Rinna from Days of our Lives and The Real Housewives of Beverly Hills appears on Live with Kelly

In his room at the Metro Court, Tracy asks Finn what he’s going to do, drink himself into a stupor for 28 days to make it through the withdrawals. He thinks it isn’t a bad plan. Tracy asks him to let Hayden be here to help him because she loves him. Finn lashes out that he doesn’t need Hayden, and Tracy is the last person who should be giving relationship advice. He slings insults at Tracy and calls her a rich lonely woman who never got over her daddy issues. Tracy throws her drink in his face. Finn immediately apologizes and admits he was trying to push her away so she wouldn’t call Hayden. Tracy points out that his insults weren’t off base. She never had many friends and preferred to do things alone. However alone is alone, and she wonders what her life might be like if she let more people in. She asks Finn if he wants to end up like her. She leaves him to think it over. Finn picks up his phone. Down in the restaurant, Bobbie and Carly are stunned when Nina, Nelle and Charlotte walk in. Bobbie immediately begins yelling, and at Nina’s suggestion, Nelle takes Charlotte to a nearby table. Nina tells Carly she doesn’t know what happened between her and Nelle, but she was going to hire Nelle as her new nanny. Carly advises against it and gives her the quick recap about who Nelle is. Bobbie doesn’t believe Lulu would want Nelle near her daughter, which pushes Nina’s buttons. Nelle approaches and decides to forgo the job because she doesn’t want to cause more problems. Nina informs Nelle that she’s hired and sends her and Charlotte to get hot chocolate. Bobbie says if this was done to spite her, Nina only has herself to blame when Nelle winds up in bed with her husband. Nina says she gave Nelle the job because she believes people can change given the chance. They are both proof of that. Carly suggests Nina watch her back.

At Kelly’s, Michael vents to Dante about Nelle. He wanted to believe her when she told him that she was trying to change and put an end to her plan, and he doesn’t know if he can forgive her. Dante tells Michael he always puts his family first, so if he kicks Nelle to the curb then do it for himself and no one else. Later, Nelle walks in with Charlotte.

Back at Anna’s, Valentin accuses Anna of either lying about the cruelest thing she ever did to him, or being ashamed that she really has blocked it out. Anna gets worked up yelling and reopens the wound on her hand. When he asks about it, she reveals she has cancer and is on blood thinners. She calls it treatable, but not curable. He is sorry, but still refuses to tell her what she wants to know. He suggests she simply forget him, and walks out. Anna makes a call to someone to ask for their help. Later, Obrecht arrives and Anna asks her for answers.

Back at the hospital, Finn calls Hayden and asks for her help.

Valentin meets Nina at the Metro Court bar. Nina fills him in on their new nanny, and asks where he’s been. He tells her about his visit with Anna.

Laura is shocked that Kevin agrees with Andre.

Valentin tells Nora, “She’s erratic.” Nora points out that is what people say about him.

Obrecht thinks Anna is hard up if she’s asking her for help.

Nelle asks Michael if he’s telling her to go.

Liv smiles and says, “You just couldn’t stay away from me!”