GH Recap: Julian explains all to Alexis in his final letter to her 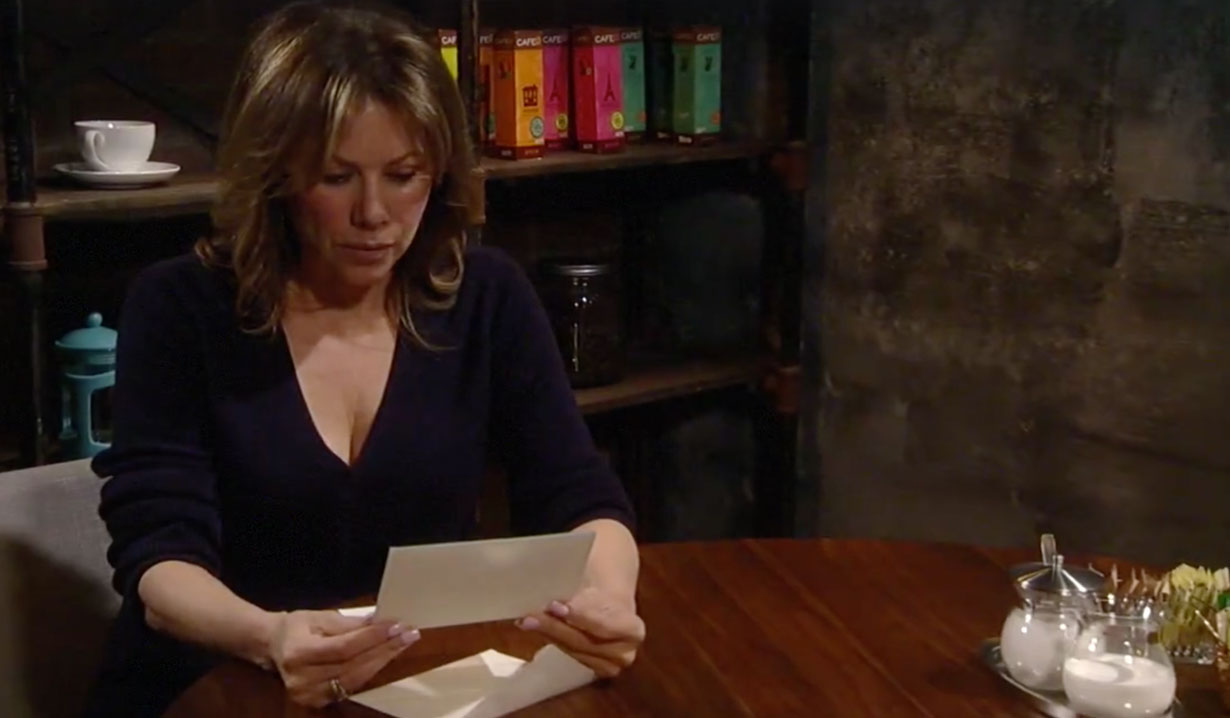 Anna visits Morgan’s grave. Felicia finds her there while visiting Georgie, and they discuss the loss of loved ones.

Carly visits with Jason and Scout at GH while Sam rests. She admits to Jason that she would have killed Olivia last night if Sonny hadn’t stopped her. Jason is glad he did because she would have carried the feeling of taking a life with her forever. Carly asks Jason if he knows she and Sonny are separated. He says he does, and that he’s known about Nelle since before Christmas. She is angry with him for not telling her, but he points out it was Sonny’s place to tell her. Jason thinks both she and Sonny can heal and be there for one another with Olivia behind bars.

Related: Why killing Emily Quartermaine was a mistake

Scott visits Olivia at the PCPD, where she is handcuffed to the table in the interrogation room. He couldn’t believe it when he heard she was still alive and as crazy as ever. He warns her she is going away for a long time. Olivia suggests he not underestimate her and warns they may see one another again soon. Scott leaves, and Dante arrives. Olivia tells Dante that she is sorry for the loss of his brother, but he should probably recuse himself from her case because it’s a conflict of interest. He refuses and promises to put her away. Later, Anna pays Olivia a visit to find out how she survived in secret all these years. Olivia was whisked away by other mob connections with the hope that she’d one day return to take out Julian. She had to undergo many surgeries after Julian put several bullets in her spine, and a doctor in China made her body and spirit whole again through reincarnation. That is when she knew she had to return and bring Duke back. Anna decides to leave, but Olivia stops her by dangling a secret she knows about Anna. Anna asks her what she knows, but Olivia laughs, “Nothing, I’m crazy, remember!”

Alexis sits in the coffee house and reads Julian’s letter. Julian appears across from her and dictates it as she reads. He explains that Olivia arrived in Port Charles last spring to seek revenge for what he did to her and to Duke. She set out to make sure Julian killed Alexis, and she threatened to kill his children if he didn’t. Julian tried to make it look like he was complying with her, and he had planned to let her go that night at the docks. He was going to make it look like he had drowned, but Sonny interfered and he was arrested. After his trial and acquittal, Olivia decided to kill him instead, and that’s how Morgan ended up dying in the car bombing. He continued to try and protect his family from Olivia, and he never stopped loving Alexis. Julian knows he brought her much unhappiness, and that she’s better off without him. He wishes her peace and happiness. Julian’s image fades as Alexis sobs. Olivia Falconeri sees her and asks why she is here and not with Sam and the baby. Alexis shares Julian’s letter with her. Olivia doesn’t know if it is truthful. Olivia thinks Julian could have warned her about Liv if he wanted to. Alexis agrees. Olivia would never forgive Julian if it were her, but she does believe he loved Alexis.

Ava drops by Sonny’s place and wants him to admit that he was wrong to blame her and Julian for Morgan’s death. He refuses because her family destroyed his. Sonny says that Olivia came for revenge against Julian for Duke’s death, so Julian is just as guilty as Olivia in Morgan’s death. The two end up arguing, and Sonny calls her out for a verbal fumble she made awhile back in admitting she did something to Morgan. He wants to know what it was. She refuses to be made a monster after all he’s done, and storms out. Out front of Sonny’s, Ava makes a call to and asks to see them immediately. Later, Dante arrives to give Sonny an update on Olivia. Sonny assures Dante that Olivia will die, but they won’t connect it to the crime. Dante pleads with his father to get out of the mob seeing that Julian is dead and Olivia in prison. He refuses because someone else would just take his place in the scene. He also offers to help Dante deal with Valentin, but Dante tells him that he will deal with Valentin on his own. After he leaves, Carly arrives.

Scott meets Ava on a building rooftop. Ava is worried Sonny is coming after her, and if he finds out what she did to Morgan’s pills then he will kill her. Ava asks Scott to get the pills from Lucy.

Valentin tells Charlotte that nobody will take her away from him and Nina.

Lulu asks Laura how that will help get her daughter back.

Anna yells at Andre to stay out of her life.

Finn makes a call and asks about an immediate opening.

Carly tells Sonny she’s here to find out what is going on between them.

Bobbie asks Nelle how she can live with herself.