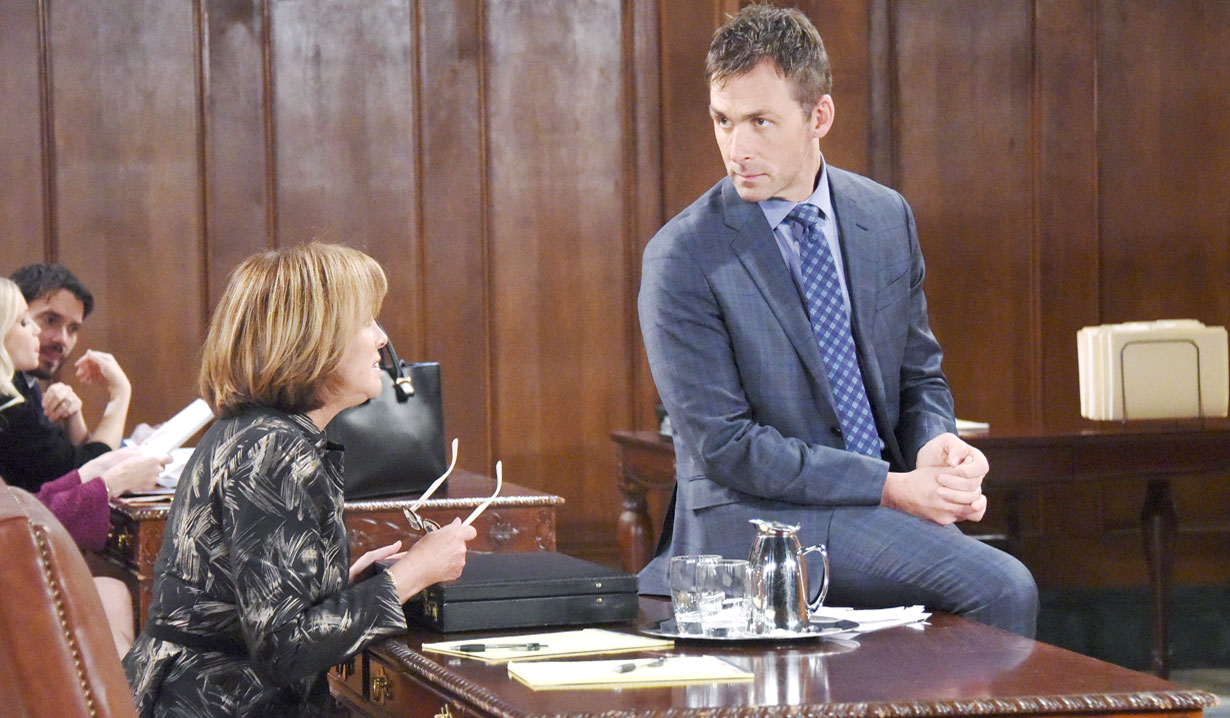 Over breakfast at a diner, Lulu, Dante and Laura discuss their hope at trial. Lulu tries to remain optimistic, believing Charlotte belongs with her and leaves to splash water on her face. Alone, Laura admits to Dante her worry over what Lulu might do if she doesn’t get custody.

At the courthouse, Charlotte tries to convince Valentin to go skating in hopes that Nina will be there. He’s trying to dissuade her from thinking Nina’s mad at her when Nina arrives. Charlotte rushes to Nina who explains sometimes adults fight but it won’t affect how she feels about her, whatever happens, she will never stop loving her. They both calm Charlotte’s nerves before she leaves for her psych evaluation. Alone, Nina confesses she had no qualms speaking on Valentin’s behalf in court – Charlotte belongs with him. Valentin questions if Nina belongs with him. Nina believes if they can leave the past behind them, they’ll be a family. He knows his life started the moment he had Charlotte, and now he has her. Lulu, Dante and Laura arrive to see them kissing. Inside the courtroom, Nora assures Valentin there’s nothing to worry about while Diane’s sure whomever does the evaluation will understand a mother’s bond to her child. The judge arrives and invites Andre into the courtroom as the psychiatrist who’s evaluated Charlotte. Mid-testimony, Lulu thinks things are bad until Andre advises Charlotte should build a relationship with Lulu, however it’s recommended that she remain in Valentin’s custody. Disappointment for Lulu follows at the suggestion that visits should be supervised. Court adjourns with Valentin, Nina and Nora being pleased. Lulu rushes Andre, questioning his reasoning. Diane reminds Lulu that things are still looking up as the judge returns with her verdict. She awards custody to Valentin with a reevaluation in six-months. Lulu exclaims, “No, you can’t do that.” Diane apologizes for Lulu’s outburst while Lulu cries and Valentin thanks Nora. Charlotte arrives after her doctor’s appointment, runs to Valentin bragging about how nice the doctor was and they leave for a celebratory lunch. Diane’s left discussing the silver lining of the ruling – Lulu can see her daughter. Laura follows Valentin out and tells him, “A lot can change in six months.”

Franco arrives at Elizabeth’s with a ‘bag full of fun’ and promises not to add detergent to his water gun. He thinks it’s the perfect time to start art therapy with Jake again. Elizabeth was hoping Jake was over whatever happened during his time with Helena but hesitantly welcomes Franco’s help. Jake joins them, happy that Franco is babysitting as Elizabeth leaves. Franco stops Jake from rushing into the fun bag and talks him into drawing pictures of their stories from childhood. Jake finds crayons but questions if they have paper. Franco does and grabs paper tubes from the fun bag. A play sword fight ensures. After, the two of them sprawl out on the floor and draw their favorite foods and activities. Jake isn’t feeling like drawing much when Franco asks him to draw something he remembers from age 4. Jake draws a door but won’t explain about it.

Andre greets Griffin at GH and asks how he’s doing after his ordeal. He’s fine, but suffering from allergies. Elizabeth finds him sneezing and offers a second opinion. He’s sick and should go home. While discussing his good news to a patient’s parents, Liz reflects there’s nothing worse than being unable to help your child. In Sam’s room, Alexis breaks the news that Julian’s dead. She explains her ordeal escaping from Liv and how Julian saved her life. Sam’s sure they wouldn’t have been in danger if not for Julian. Alexis can’t listen to Sam berate Julian further and snaps, “You do realize that you’re speaking about your father!” She apologizes as soon as it comes out of her mouth. Sam knows she’s been through a lot but worries she’ll rationalize all Julian’s done. Alexis realizes it’s time for her to open Julian’s letter in the lock box. Sam doesn’t buy Liv being responsible for all the things Julian did to Alexis and hopes she doesn’t romanticize him. Alexis leaves when Elizabeth checks in and peeks at Emily Scout before handing Sam a gift. Sam’s touched to receive a baby book and thanks her. Alone, Sam stares at the blank family tree and the empty line where one would write the grandfather’s name.

Alexis retreats to the diner alone. She places the lock box key on the table and pulls out Julian’s letter addressed to her.

Felicia has questions for Anna.

Sonny reminds Ava that he knows she’s not innocent.

Jason tells Carly they need to be there for each other.

GH Recap: Julian explains all to...