GH Recap: Julian is feared dead, while Carly holds a gun on Olivia

Wednesday March 15, 2017: Carly shoots at Olivia, the search for Julian is on, Kiki and Dillon grow closer, and Monica gives Tracy some advice. 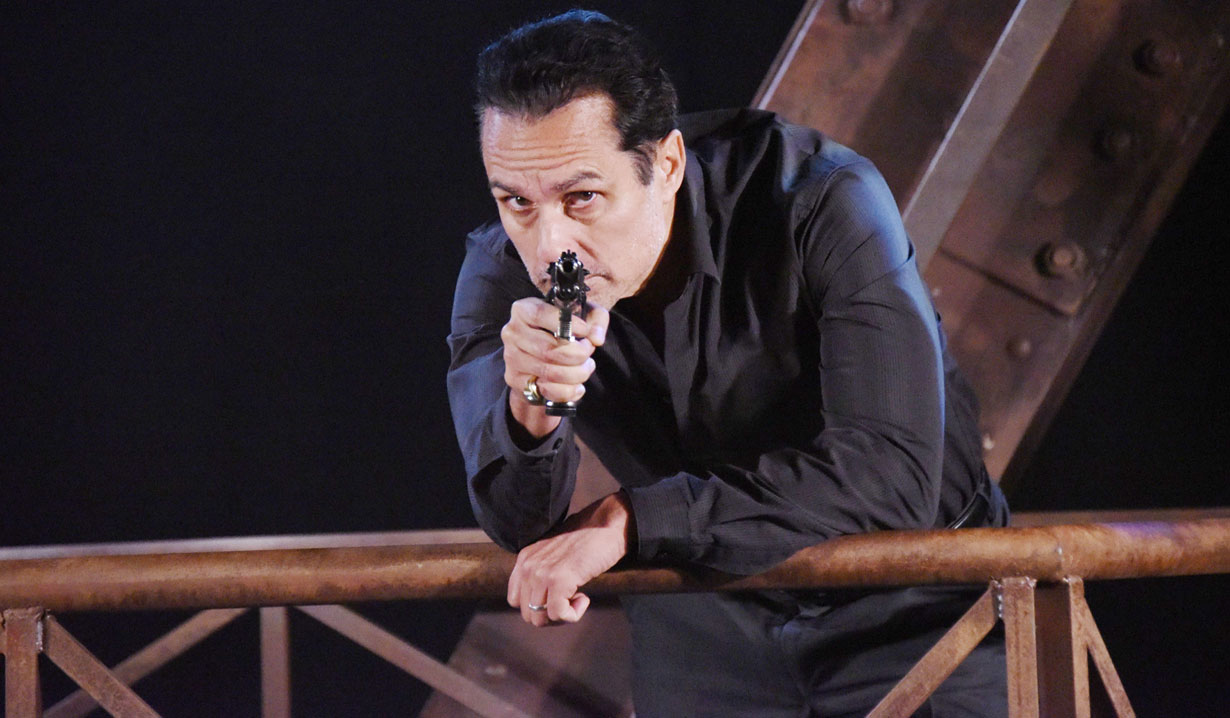 On the bridge, Sonny demands Rudge find out where Olivia is or else. Rudge swears he doesn’t know where she went, only that they were supposed to meet on the pier to take a boat out of town. Rudge tells Sonny that all he knows is Olivia had one last wrong to make right, but he doesn’t know what it was.

Jordan brings Ava into the station for a statement on what Olivia did to her. Ava thinks Olivia is planning to kill Julian. Alexis walks in and reveals that it may be too late, and Julian may already be dead. Alexis tells them what happened on the bridge, and that the last thing she really remembers is running after Julian freed her. She heard a gunshot and saw Olivia on the bridge, but Julian was nowhere to be seen.

News: Brandon Barash to guest star on an upcoming episode of Criminal Minds: Beyond Borders

Kiki finds Dillon at the Quartermaine mansion watching “Gilmore Girls” and eating popcorn. He swears it is research on a story that Maxie wants to do. Kiki informs Dillon about the developments with Ava and her aunt Olivia. Dillon had no idea that there was a bomb at GH tonight because he was so engrossed in the show. The two talk for a bit before making out. Monica and Tracy walk in, and Tracy jokes that she knew her son would be worried sick about them. Kiki apologizes for what her aunt did, but Monica says she has no reason to feel guilty. Dillon suggests to Kiki they go upstairs, and Tracy thinks her son has no shame. Monica jokes, “Why should he, we never did!” Monica and Tracy drink and toast to them, and to life. Monica thanks Tracy for supporting her when Jason was in danger tonight. Tracy congratulates Monica on her new grandchild, and admits she’d like another. Monica laughs that she may get her wish and nods to what is happening upstairs. Tracy hopes not another Jerome baby given Ned is raising Julian’s child. Later, Monica has to go meet a good friend that she is casually seeing. She suggests Tracy find one of her own. Monica returns because a letter for Tracy was mixed in with her mail. She hands it to Tracy, and notices it is from Larry Ashton. Tracy opens it and reads it out loud. Larry has something extremely important to discuss with her and asks her to contact him. Tracy thinks he just needs money and tears the letter up. Upstairs, Dillon and Kiki have sex, and Kiki jokes it’s an interesting way to see his room for the first time.

At the graveyard, Carly holds a gun on a wounded Olivia. Olivia begs Carly not to kill her, but Carly tells her that none of her begging will bring her son back. Carly exclaims, “Enjoy your time in hell!” She shoots, but misses. Olivia tries to run and screams for help, but Carly tells her that no one can hear her. Carly aims the gun at Olivia and says, “This is for you Morgan,” when Sonny arrives and tells her to give him the gun. Carly refuses and says she finally understands Sonny’s need for vengeance. He tells her to think about their other children. Sonny promises that Olivia will die when she least expects it. Carly gives Sonny the gun and tells Olivia that Sonny will destroy her, and she almost feels sorry for her. Sonny decides to turn Olivia in to the police.

Jordan and Dante search the area of the bridge and see someone below the bridge.

Back at the PCPD, Ava suggests Alexis go get checked out at the hospital. Alexis is shocked by her civility. Ava thinks Julian is resourceful and he may still be alive. Ava decides to go look for Julian, and Alexis follows her.

Alexis and Ava arrive at the bridge just as Dante and Jordan discover Rudge at the bottom of it. Alexis identifies him as Olivia’s associate. Jordan questions him and Rudge swears again that he doesn’t know where Olivia is, which he already told Sonny. Dante wonders where his father went. Rudge has no clue, but thinks Sonny knew where to find Olivia. Dante takes Rudge back to the station. Another cop finds a bloody jacket by the river, and Ava identifies it as Julian’s. There was also blood on the riverbank, but no body has been found. Ava tells Alexis it sounds bad, but she survived a similar incident. Jordan tells them that even if Julian survived the gunshot, he couldn’t survive the river. She warns them that Julian is probably dead.

Back at the graveyard, Dante arrives and arrests Olivia. Olivia claims Carly tried to kill her, but Carly says it was self-defense. Dante hauls Olivia off, and Sonny promises that she will pay.

Lulu believes Charlotte belongs with her.

Nora tells Valentin that he has nothing to worry about.

Nina tells Charlotte that whatever happens, she will never stop loving her.

Liz tells Griffin there is nothing worse than being unable to help your child.

Alexis tells Sam, “You realize you are speaking about your father!”